The fifth month of the year has been completed, it has been a warmer and  rainy month generally.  Not as cold as April, thankfully, the frosts have stopped here and it has been warmer than it was, but until the last few days it has been a dank month. 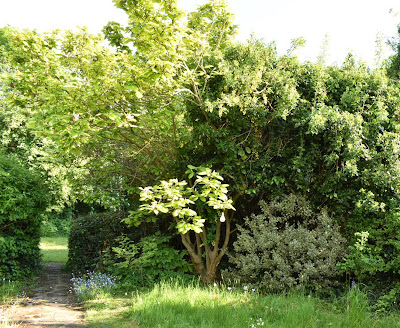 The garden is generally looking lush and green.  The rain has made everything grow suddenly.  The front side lawn is semi-mowed.  I mow a strip to try and prove to the postlady that it is deliberately left long as it has bulbs and winter aconite foliage still dying down.  I will mow when I am certain they have gained enough energy for next year but I am in no rush. 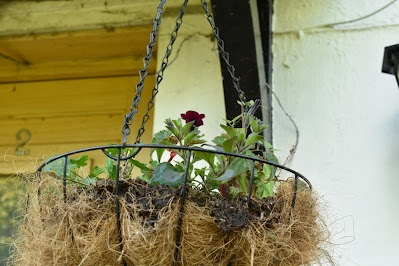 There has been a swapping over of hanging baskets.  This one has some overwintered plants still growing and has had a petunia and begonia or three popped in to give it a refresh.  I decided to try and be sustainable with hanging baskets and the two I have are now both in their second year. 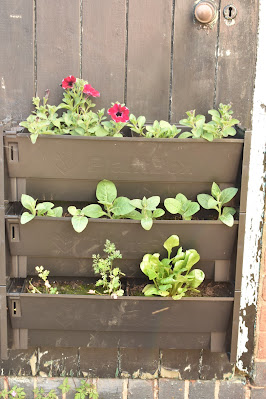 There are more of this Petunia - Pegasus bi-colour - in the wall planter I am trialling from PlantBox.  I had to wait until the frosts had finished before planting it up but now it contains the petunias, some Nicotiana, some lemon coriander and perpetual spinach.  All are growing well. 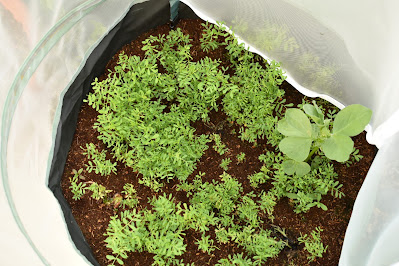 The lentils are also growing well in the Vegebag, though the broad beans are not as happy as I would like.  I think they might be a bit crowded by the lentils. 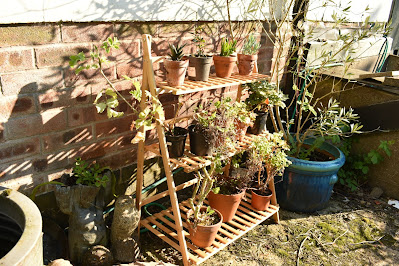 I bought this cheap and cheerful plantstand the other day.  I have used it for a few succulents and some pelagoniums that are now enjoying being close to the warm wall. 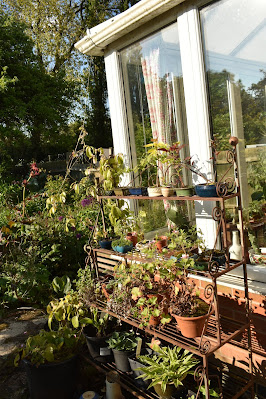 The other plantstand that I found when I moved into this house is now home to some hostas, some pelagoniums and rather more trainee bonsai trees than might seem reasonable.  I seem to have got a bit obsessed....  You can also just about see the Stauntonia which is growing up the conservatory.  This overwintered outside as I was not able to move it into the greenhouse as usual due to breaking my ankle.  I expected it to die, but it is growing well and filling this corner of the garden with its incredible scent. 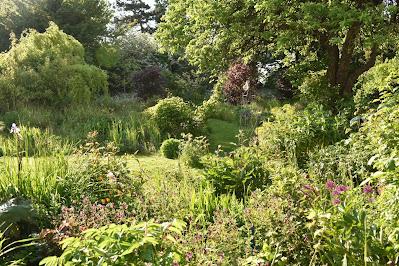 I look across the garden from this point and you can see the alliums that are now flowering and the first of the iris siberica is also in flower. 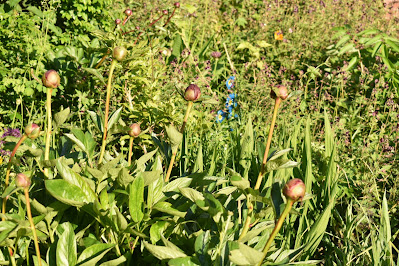 The herbacious peonies are just starting to losen their buds.  Everything feels late this year,  I looked back to the End of Month Review for May 2020 and there was a lot more in flower at that point. 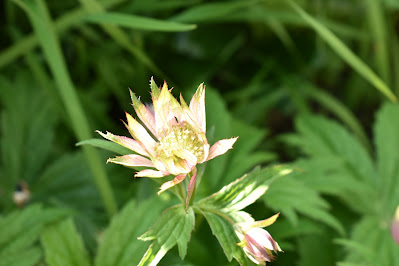 Colour is appearing though, the astrantias are starting to open. 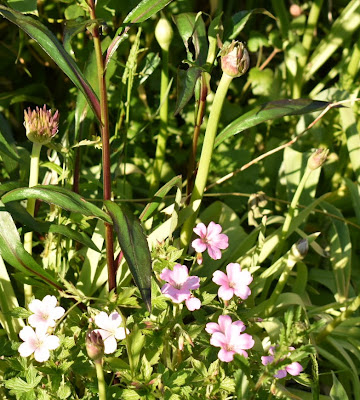 as are the geraniums, a real main-stay of my garden. 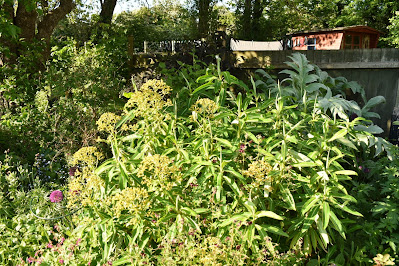 The Euphorbia melifera is filling the garden with its honey scent and behind it you can see the leaves of the cardoon.  You cannot clearly see the dark red leaves of the sambucus behind the euphorbia, but it is there and provides great structure in this shady hinterland of the Conservatory Border just where the limbs of the Bramley tree start to reach out. 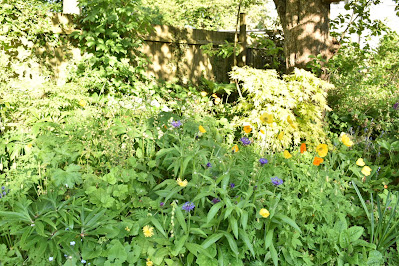 The other side of the Bramely is the Spring Border.  Currently alive with welsh poppies and blue perennial centaurea, a fantastic plant to grow.  Bees love it and if you cut it back hard after its first flowering it will reappear and flower again.  Very easy to divide too, I bought one plant some years ago and now I must have five or six. 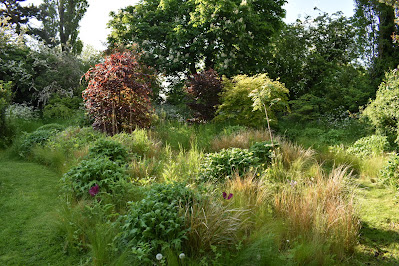 The Prairie Borders are still looking rather s/crappy.  The echinops are on their way up and you can see where I planted Tulip Merlot into the borders.  I did not plant enough, but it has given some Spring colour. 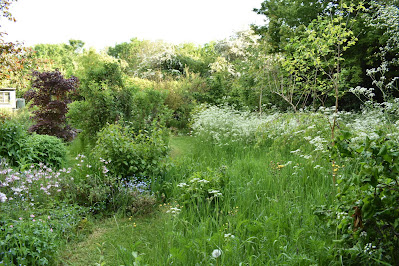 The Wild Garden is frothy (man).  I cut paths through it and at the moment the cow parsley is a good 4/5 foot high.  Once the flowers are over I will cut back the stalks to let more light in, but generally the Wild Garden just does its own thing until I mow it in late Summer. 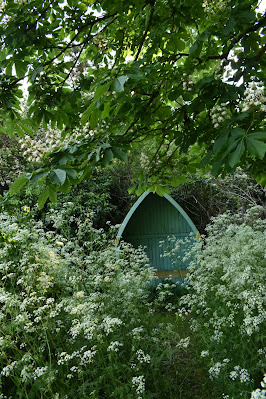 The Portmeirion bench has nearly disappeared from view. 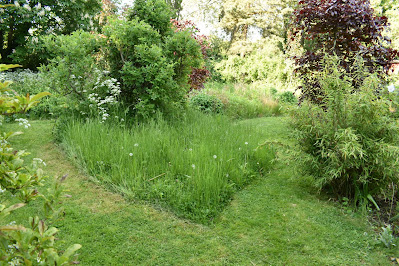 The Dancing Lawn is currently shaggy as, like the front side lawn, I am waiting for the Spring bulb foliage to die down. 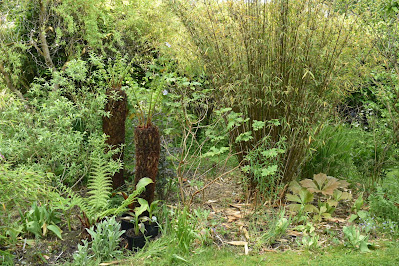 The Exotic Border is looking tree-fern-tastic!  The dead tree-fern is not dead and its two replacements are also very much alive. 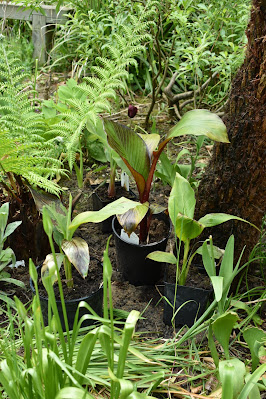 There are also some bananas in pots around the tree ferns.  They are too small to plant out this year, so I will move them inside over the winter.  Next year maybe I will feel more confident in planting them out - apart from the Ensete Maurelii which will always live in a pot as they are tender.   Regular readers may recall that I have a large Ensete.  This is currently in the greenhouse deciding if it is dead or not.  I keep watering it and whispering words of love to it, but it got cold last winter as did a all my large plants that usually live indoors over winter the same as the Stauntonia above. 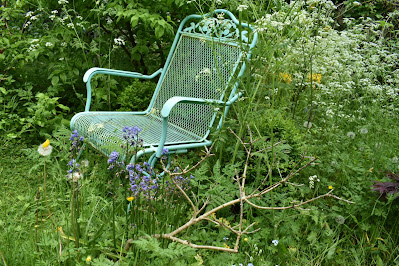 The Accidental Shrubbery is currently mainly cow parsley.  I pause when I pass Trev's chair, I miss him.  I realised today that his chair is next to Chesney's Chionanthus Virginicus which was planted when Chesney died.  I miss not having a black cat around, I think I might not last much longer without a black cat. 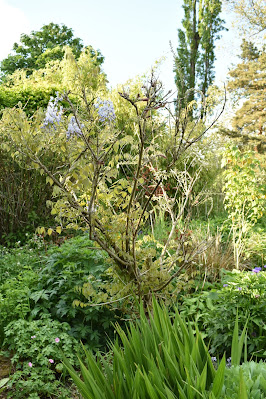 The standard wisteria is starting to flower.  It was hit hard by the late frosts but it has managed to flower nonetheless. 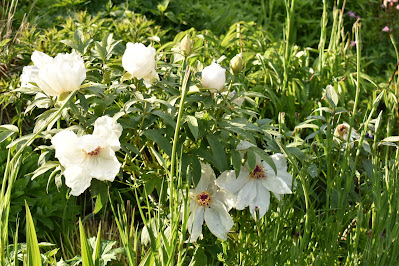 and this tree peony has flowered very well this year too. 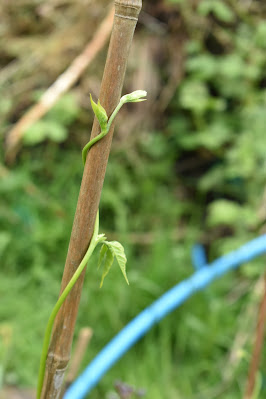 In the veg garden I watch the twirl of the beans. 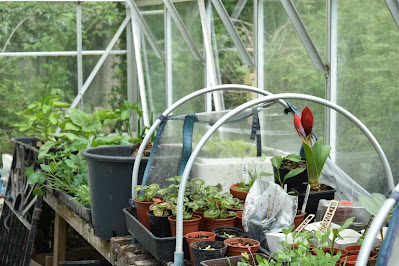 and the greenhouse is still quite full with small pelagoniums, aubergines and chillies and various seedlings. 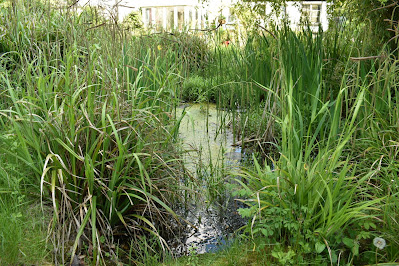 I end on the pond as is my habit.  The pond is looking a bit gooey and green so I will need to deal with that.
Stay safe and be kind.
For more from the Blackberry Garden follow me on Twitter and Facebook
Dicksonia Antarctica End of month review End of month view Ensete maurelii Hanging basket Petunias Plantbox standard wisteria Tree Fern