October 20, 2019
I have been enjoying myself this year being a bit more determined than usual to grow my own veg.  I have grown veg for many years to varying degrees of success.  Usually the lack of success is fairly and squarely in proportion to the amount of effort I have put in.  There's a surprise! 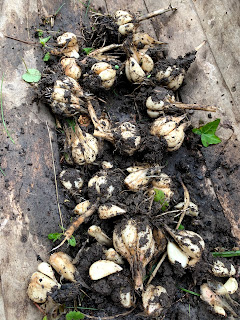 Freshly picked and rather muddy (now drying) is my garlic crop.  I planted the garlic in March which is late in relation to commonly held practice.  It might not have yielded the fattest bulbs ever but they are good enough and I am very pleased at this success. 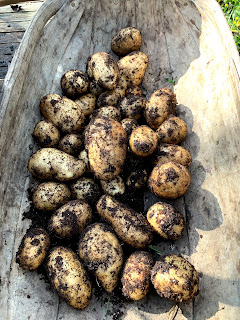 I have also harvested the last of the potatoes.  I did not plant a lot of potatoes and these were grown in 'bags'.  This has worked out very well.  I have had a nice steady amount of potatoes and the bags are reusable so I will be doing the same thing again next year. 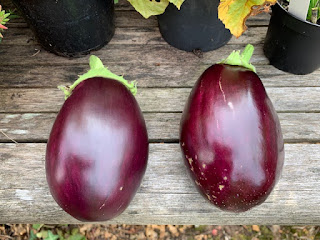 I've been similarly pleased with my aubergine harvest this year.  I think I have harvested five this year, which as I would have been pleased at one, means my joy is fivefold more. 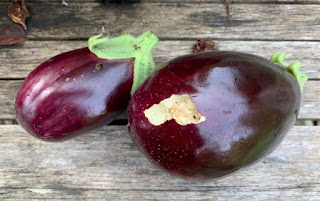 Admittedly the last few got a bit nibbled, but I was happy enough nonetheless. 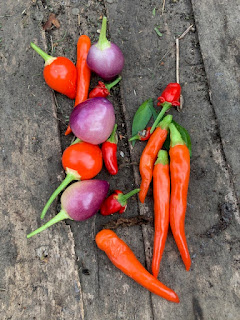 I routinely grow chillies as they are something  I use a lot in cooking.  To preserve them I just pop them into the freezer whole, straight into a freezer bag I just keep topping up.  I then cut and cook them from frozen.  This works well for me.  This year I grew the more round-shaped Chilli 'Spangles' as a new variety for me.  I have been delighted with this chilli.  It is very pretty when growing and also has a nice heat and a really good flavour. 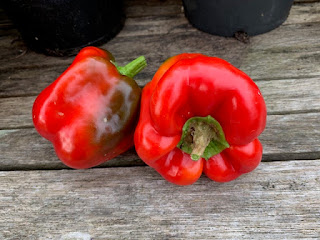 I have also grown peppers this year and again, these have done really well. 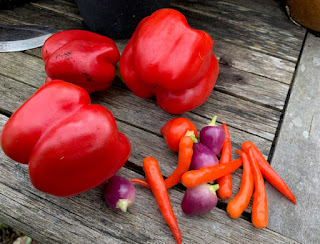 I had three plants and I think I have harvested about three from each plant. 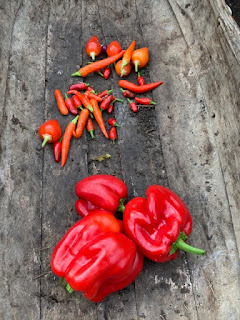 They have a really good flavour and, as mentioned in my August update, I remain totally amazed that I can grow something I regard as rather exotic, in my greenhouse. 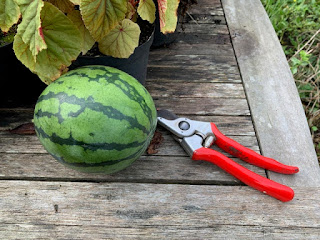 The accidental watermelon has been picked.  It had stopped putting on any size and the plant was starting to wither.  The secateurs are there for scale.  As I had no intention of growing a watermelon, the fact that I have is surprising and amazing.  It has given me a lot of fun during this year as I have watched it develop from mis-sold seeds.  It is the definitive 'silver lining'. 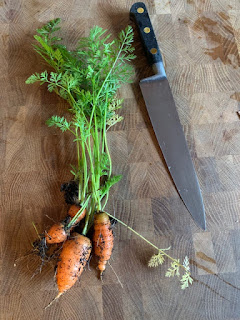 To the unwitting observer these might look like a few stubby carrots.  They are indeed a few stubby carrots, but they are the stubby carrots I successfully grew and I picked them today (20th October) to put them straight into the slowcooker along with dinner.  I have struggled a lot with growing carrots previously.  This year I put my success down to growing them in containers and in coir.  The loose fine coir has meant no stones to bend them around and seems to have suited them well.  I have said previously I might be smuggy-mcsmugface about my veg growing this year, and nowhere is this more true than when I look at my carrots.

I have purple sprouting broccoli still growing in the garden, but I have failed miserably with my winter cabbage.  I bought some plug cabbage plants, as I usually do, but they arrived in a very poor state and did not survive.  By the time I knew they were definitely dead then I could not get any more as they had sold out.  The vendor has been contacted and a refund given so I am not out of pocket, but I am out of cabbage.  I shall content myself to planning for next year and in particular making sure I am growing something all year round.  I need to be better on autumn and winter veg and before you all shout sprouts, I say no - no to sprouts and all things sprout-related.  They are the devil's food and I will have none of them.