August 25, 2019
I decided this year to focus more on growing vegetables this year and as a result I am forcing myself to keep on track by writing fairly regularly about it.

It turns out that paying attention to growing vegetables results in more vegetables - who knew! 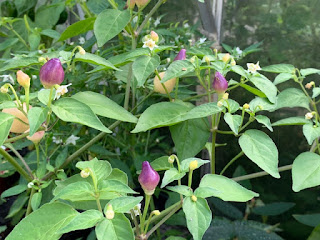 I am very pleased with these Chillies 'Spangles'.  I am growing them because they are so pretty.  I will report back on how they taste, but to be honest just looking at them makes me smile. 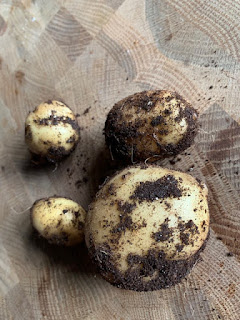 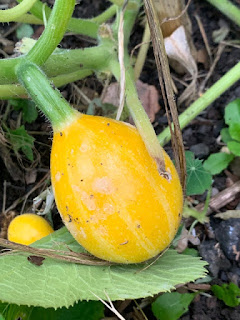 I have struggled with these yellow round courgettes, the slugs love them and have eaten nearly every single one of them.  This is the largest I have managed so far and I will have picked it by the end of the weekend as every day it is still there I feel like it is on borrowed time.  As I wrote this I realised that next year I should grow these in containers, it might help with the slug issues (I know slugs can climb, but...) This seems like a good idea and I will give it a go. 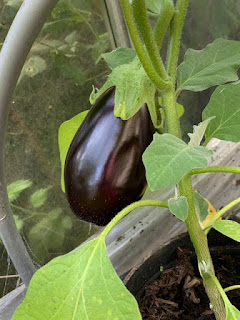 Back into the greenhouse and the aubergine is growing really well.  I will pick this soon as well as it is getting to a goodly size. 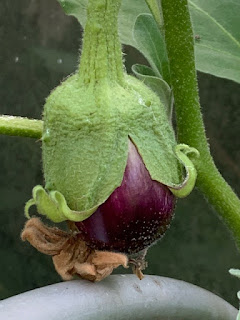 and look, look!  there is another one appearing.  This is so exciting, you have to bear in mind when I was growing up that aubergines did not exist and when they began to appear they were so exotic that the thought you could actually grow one seemed totally impossible.  Now I know some of you will argue that they did exist, it is just that they were not available in my corner of West Bridgford, but in effect, that is pretty much the same thing. 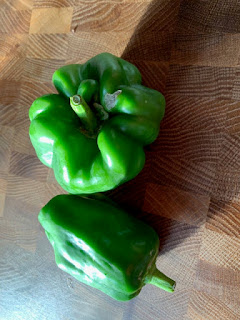 Green peppers did exist, well certainly by the time I was a teenager they had appeared; but they were incredibly exotic nonetheless.  This is the first year I have eaten my own home-grown green peppers.  I might be smuggy-mcsmugface about the whole thing.  I cannot begin to describe how wondrous it is that such a thing could be possible.  These have been growing in Dalefoot Wool Compost for Tomatoes which I was given to try out.  I have not paid for this compost but I am also under no obligation to write about it and/or say nice things about it.  It has turned out to be really good.  I am really pleased with it.  I planted the plants into this once they had established well and they have developed well. 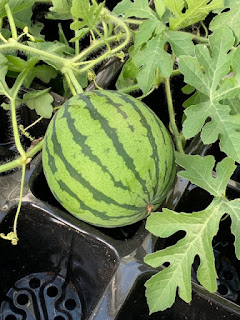 The accidental watermelon is also growing in this compost.  It has produced two melons, one has been a bit eaten but this one is still looking undamaged.  I am enjoying growing it very much and it still makes me laugh that I was sold these seeds as something completely different.  It can be very annoying to receive the wrong plant even by accident; and in reality I was scammed and I should be furious.  It only cost me a couple of pounds and I knew immediately they were not the seeds they purported to be and it was my daft mistake in falling for it, and look - I have these to show for it.  All is good.
GYO vegetable gardening Vegetable Growing watermelon