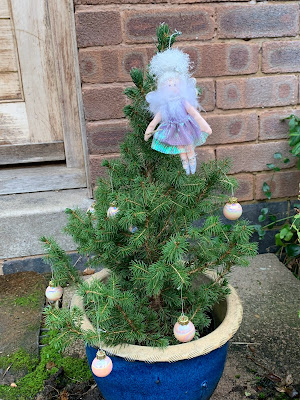 I grew up thinking that Christmas trees were made of silver tinsel (I think I still do really) and they are certainly something that 'live' in a box in the attic.  I have had my artificial tree (sadly not silver tinsel) for many years now and I do like that it is there ready when I need it and I can just put it away when I want to.

My little Christmas tree has been repotted and has spent a year outside.  It has grown well, it has had a moment of flag-waving and I have been really pleased with it.  As Christmas got closer I started to think about bringing her back indoors to be decorated and then I hit a problem.

Problem number one was I brought her indoors and could not find a good position to place her.  I did not want to put her over a radiator as I want her to continue to thrive.  I found a nice place for her and just as I started to move away I thought I saw a hair or thread or something.  This was problem number two:  I bent down to pick it off and it moved.  At first I thought it moved in possibly a draft, or maybe as I breathed out.  I looked again and as my fingers reached out towards it, suddenly I saw what it was.  Yes, it was a sodding great spider (this is a technical description).  I carefully picked the pot back up - held it at arm's length and quickly but smoothly carried her back outside and put her on the front door step as it was closer than the back door.  Spider safely deposited back outside I shut the door quickly and happily. 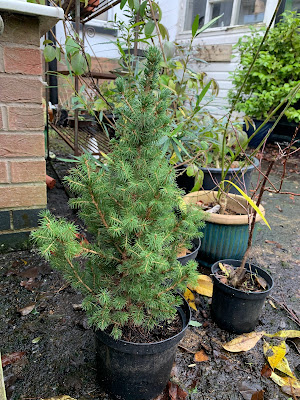 Now that Christmas is over, I have placed her back into the back garden, just close to the Courtyard Garden.  When originally placed in the Courtyard Garden she was in the shadier recesses of the Courtyard where she was unable to get enough light.  I think she was too close to the other plants and at one point she was looking a bit patchy on the side that didn't face the light.  Once placed just outside of the Courtyard she soon recovered.  So here she will sit until next Christmas when she will resume front doorstep duty, suitably decorated.  She has found her role and her place.  Always a good thing.