Soooo - remember when I told you I accidentally ended up with three tree ferns?  Well, after a Winter of dressing them up as pirates there has finally been the great unwrapping.  Their headscarves and straw padding have been removed until Winter returns. 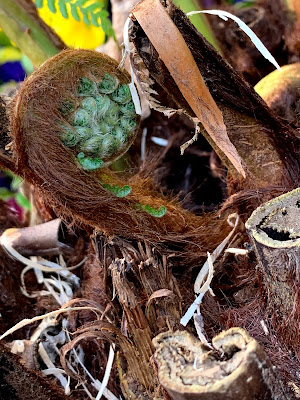 I have been regularly watering them as I now know that keeping them watered is the key to success.  All these years I thought the great frost of 2010 killed my original tree fern, but now I suspect it might be because I rarely if ever watered it.  I also now understand more about their root system better and probably digging up twice in two years did it a lot of damage that it weakened it even further.  With my precious trio of tree ferns I am determined not to make the same mistakes again. 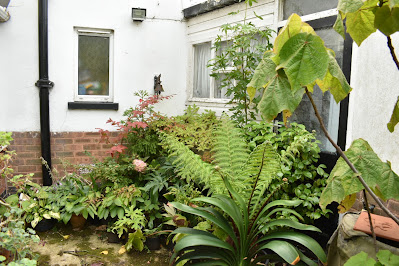 The smallest of the three, Oddbod Junior Junior, was in a pot in the Courtyard Garden.  Having just said that I do not intend to make the same mistakes again I decided that I would plant it into the border to be closer to the other two.  It had survived one winter outside so I am hopeful that whilst small, it is big enough if protected to be ok. 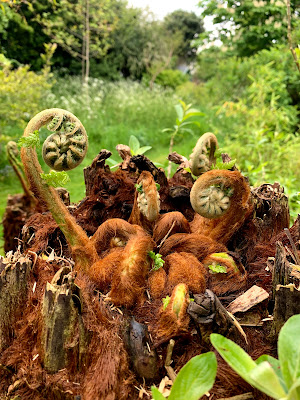 There is something just so magical about tree ferns.  They knuckle up and then start unfurling their fronds.  Once they get going it seems like you can almost see them growing.  They are so vitally alive during their growing season.  I know other plants are too, I celebrate the growth of all my garden, but there is some inherent dark art involved in how a tree fern grows.  One thing I was really glad about was my habit of keeping a garden journal; whilst it is many years since I last had a tree fern I could look back and see when I might expect to see fronds.  It helped curb my panic that they might be dead. 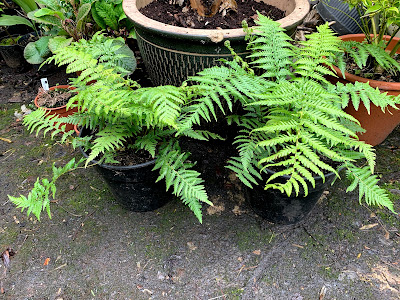 Such was my joy at the growth of my tree ferns that at the point I decided to plant out Oddbod Junior Junior into the Exotic Border, I realised I still wanted to see one from the Conservatory.  So I ordered a very baby one as it was the least expensive.  I know it will not really look like a tree fern until I've probably been dead quite a while, but I wanted one anyway.  The day arrived when the delivery happened and I looked in the rather heavy box to find........ not a 2 litre tree fern in a pot, but a 2ft tree fern log which meant a price difference of over £80.  For a moment I was not sure what to do, but then I thought that a company losing £80 is rather a lot to lose.  I also thought that some poor devil was looking at a 2 litre tree fern and wondering where the rest of it was.  So I contacted the seller and explained what had happened.  They collected the 2ft log (they almost had to wrench it from my hands) but very kindly sent me 2 x 2 litre tree ferns as a thank you for letting them know which was very kind of them and I did appreciate it.  So now I have five tree ferns! 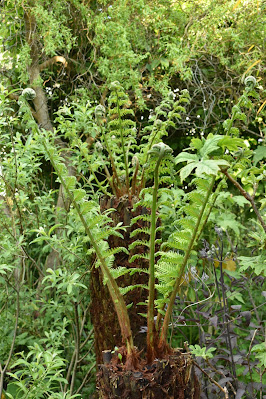 Meanwhile Oddbod and Oddbod Junior continued to throw out fronds and I started to really plan what the Exotic Border would look like.  I remembered the course that my friend Michelle and I had attended at Great Dixter six years ago (six years!!) which I had found very inspirational but somehow had never managed to quite put into practice.  Suddenly, inspired by the tree ferns, I had something I could work around, a foundation that would pull this border together. 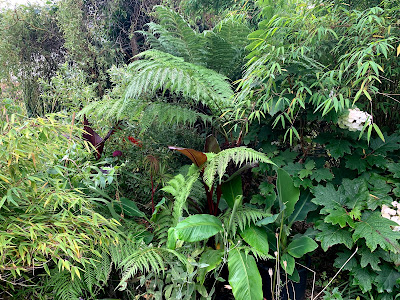 I added a few bananas and cannas.  They are all still in their pots as they are quite young and I will over winter them all under cover.  You cannot see they are still in pots but this is very much like 'set dressing'; it is the part of the garden that needs key elements to be physically moved to ensure that next year I can do this again. 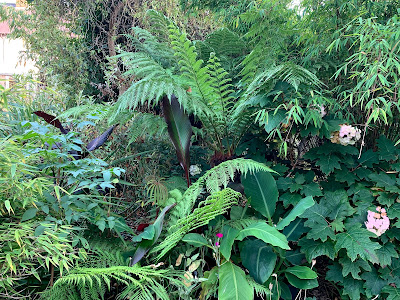 Not everything has to be moved, the bamboos have been planted for many years now as has the Hydrangea quercifolia.  I did add some other tenders such as a Begonia luxurians and also some Justicia carnea.  I have aimed this year for different textures more than lots of vibrant colours and I like the effect a lot.  I have also bought some bargain Dahlia imperialis, now in the border but still in their pots.  I am very excited that if I keep them alive they may one day flower.
The tree ferns have inspired me to reevaluate my planting of this year and that is always a good thing.  After years of not being happy with this border, with it never really achieving what I had in my mind; this year it has been a delight.  I wonder now what next year will bring.
Stay safe and be kind.
For more from the Blackberry Garden follow me on Twitter and Facebook
Begonia luxurians cannas Dicksonia Antarctica Justicia carnea Oddbod Tree Fern