I think I have mentioned a couple of times that when I first moved to this house one of the plants that moved with me was my tree fern, a Dicksonia Antarctica that I bought in 2003.  I loved my tree fern very much and there was no way I was leaving it behind when I moved to Leicester. 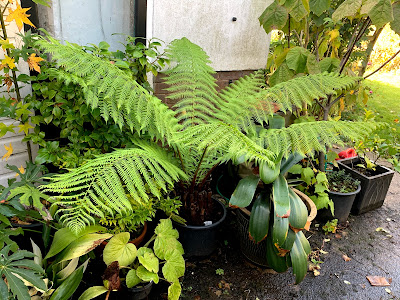 When I moved into this house in 2007 it was one of the first plants to be planted into what would be its forever home. 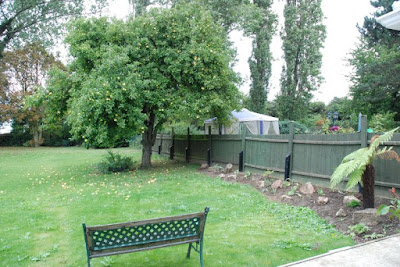 Here is my beloved tree fern.  This photo was taken days after moving to this garden.  Sadly my tree fern died in the hard winter of 2010 and I mourned its loss.  I often thought I would buy another, but I could not picture where I would plant it and they are rather an investment.
Time passed and then earlier this year I decided that I should buy a new tree fern.  I found one at a good price and ordered it.  It was not due to arrive until August and I did not mind that, I was happy to wait.
Joy of joys in June I received an email saying that it would be delivered within a week or so.  I knew exactly where I was going to plant it and looked forward to its arrival. 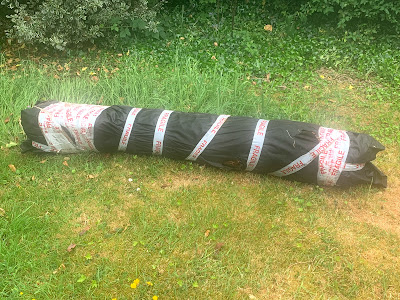 It arrived promptly, it is a 5 ft one which felt wildly extravagant. 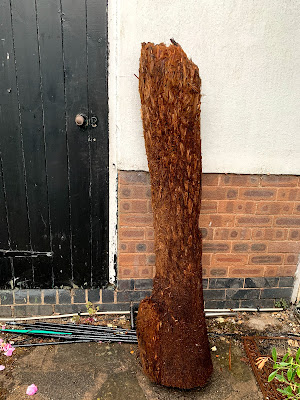 I unpacked it and was pleased with it.  The fronds had been removed for transit.  The delivery man had dropped the tree rather heavily when it arrived.... 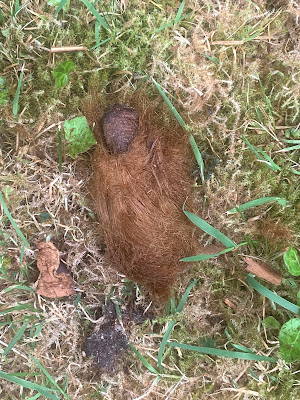 ....bits fell off.  I swear this is Oddbod's finger...  If you have no idea what I am talking about then look up the film Carry on Screaming.  It is my favourite Carry on film and probably the only one I think I have seen more than once. 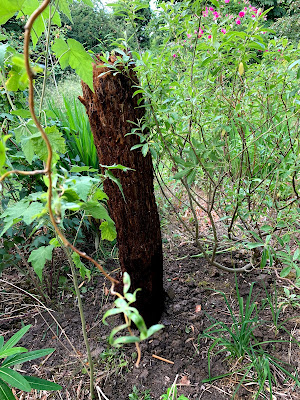 I planted the tree fern into the Exotic Garden - it took some effort as it was very heavy, but my trusty trolley helped me not wreck my back. 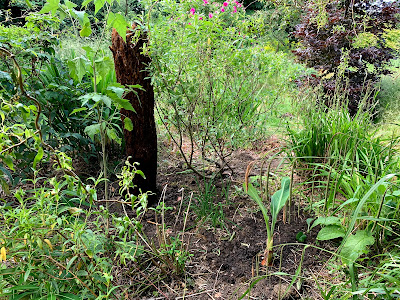 I planted a dwarf banana nearby as that makes it truly an exotic border, 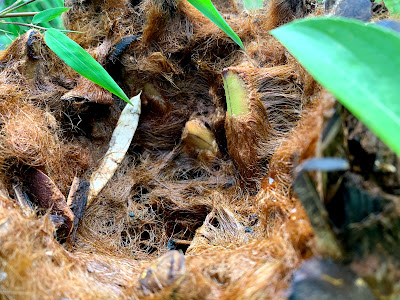 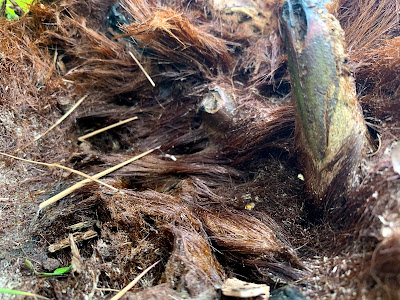 I despaired.   I had watering it copiously.  A watering can full a day every day.  But it was not looking like it was doing much.  I emailed the nursery I had bought it from and asked if I was being impatient.  They asked for a photo and I sent them this one.  They said they would send me a replacement:  they had no 5 ft ones left but I could have a 4ft and a 1ft.  This seemed good to me so I said yes. 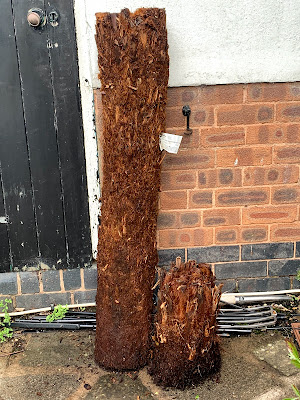 They soon arrived and I was very pleased.  The small one I put into a pot so it can live in the Courtyard Garden.  This means I can see it when I am working from home as it is just outside of my conservatory/office corner. 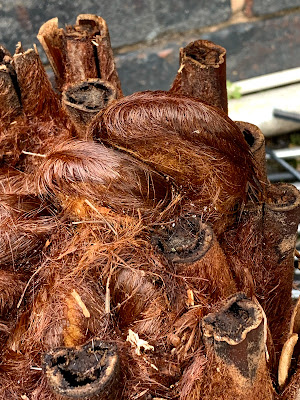 The small one, shall we call it Oddbod Junior Junior, had clear signs of frondage so I was confident it would be ok. 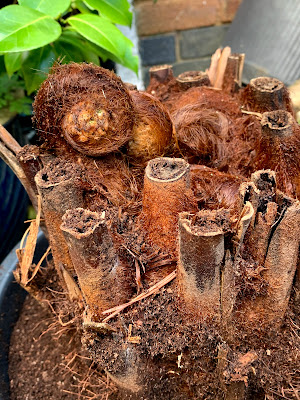 Within days there was movement, 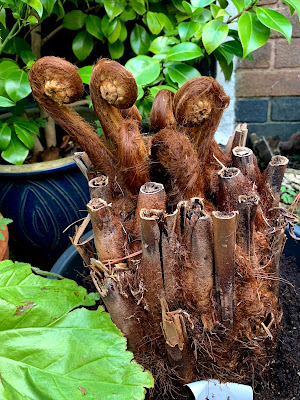 and then more movement, 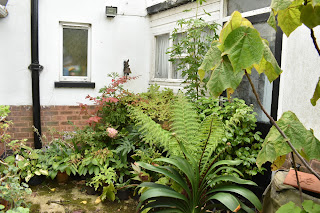 Until full happiness was achieved.  I could not be happier with Oddbod Junior Junior. 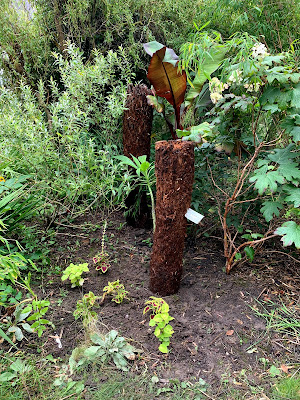 I cleared a space in the Exotic Border and planted the newly named Oddbod Junior close to Oddbod  I had not removed Oddbod as I am always someone who lives in hope even when it might appear there is little to be had.  I was now watering both of them with a watering can full each every day. 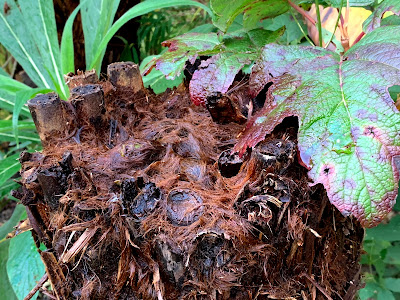 Every day I checked for progress.  Was I imagining a frond? 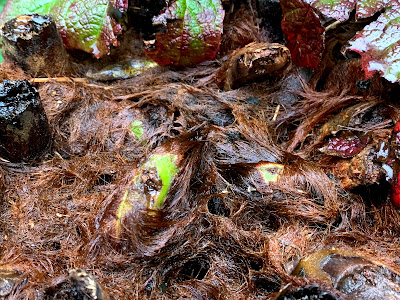 No imaginary frondage, this is real signs of life.  Green means life. 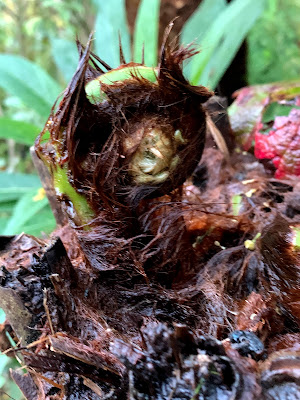 There is much whooping in the Levey household with the emergence of the first frond.  Oddbod Junior is alive!!!!  (please imagine this as if Kenneth Williams was saying it). 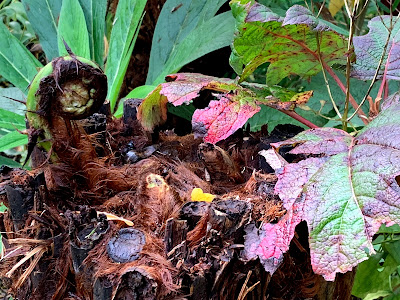 and what about Oddbod I hear you ask?  Has he been composted yet?
Bearing in mind I still have the long dead corpse of the original tree fern that died in 2010 that is not likely is it? 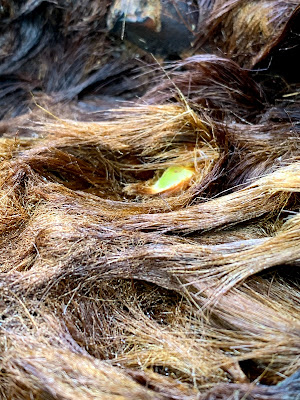 Look - Oddbod has a glimpse of green, I have hope that if I can get him through the Winter that next year he may also be ok.
My tree-fern cup runneth over and I shall bore you all stupid with worrying about them and watching them over the Winter until I see life in them next Spring.  My habit of keeping a gardening journal means I do know when the original one used to show signs of life so I have a reasonable judge of time for when my worry should start to increase.
Stay safe all - and be kind.
Carry on Screaming Dicksonia Antarctica Oddbod Tree Fern