October 22, 2015
Our whole weekend, which was actually three days, was based on arriving at Great Dixter for one of their workshops on exotic planting.  My friend is more exotic-planting orientated than I am (I do not regard the owner of one banana and some bamboo really as exotic planting in my own garden, but more of this later).  I am, however, a lover of Great Dixter and also the chance to listen to Fergus Garrett talk about anything is something I would not miss.  I think he could read the phone book and I would be interested, though I might ask him whether underplanting Smiths with the Smithers-Jones is a good autumnal mix.  Anyhoo, we were going to Great Dixter and I was excited. 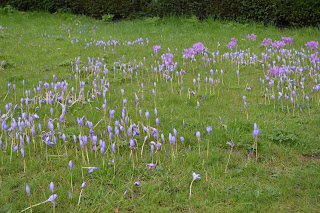 As we walked towards the front door my eyes were immediately drawn to the Autumn Crocii in the lawns.  The weather had decided it was going to be unkind to us on this day as the threat of rain was hanging over us.  Even in the grey cloud the blue of these crocii shone out. 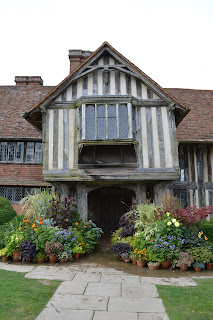 The front door has to be photographed, it is against the law not to go to Great Dixter, fall to your knees in front of the fantastic array of pots and chant 'we are not worthy'. 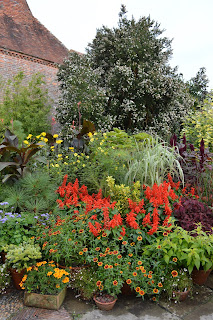 as we wandered around to the side of the house and saw this display of pots I might (did) fall to my knees again.  Breathtaking. 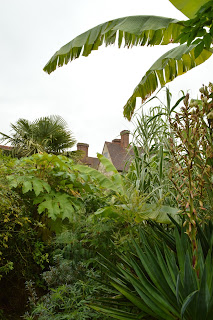 We were there to learn about exotic planting and so we did spend quite a lot of time in the Exotic Garden (that surprised you I'm sure).  It was really interesting (understatement) and inspiring.  What we found probably most interesting was learning how the Exotic Garden changes from year to year.  Some years it is a riot of colour, as indeed it was when we had first visited Great Dixter probably about ten years ago.  Other years, such as this year, it is more green.  Fergus also talked about how he was trying to cut through the middle story of planting so that more could be seen through the planting rather than people focussing on looking up.  This was thought provoking, we realised as we walked around we were looking up a lot. 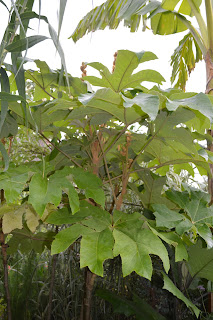 We also spent a lot of time considering leaf shape and colour. 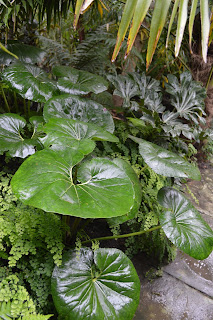 It was that brilliant mix of being seemingly quite simple yet you know that is what is going on takes great skill. 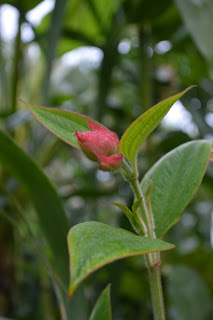 It is a garden of the bigger picture and at the same time focussing on the detail. 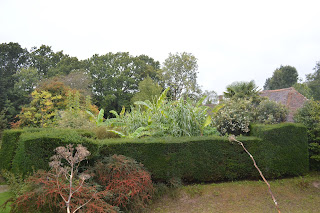 I loved this view of the Exotic Garden spilling out from its hedge boundary. 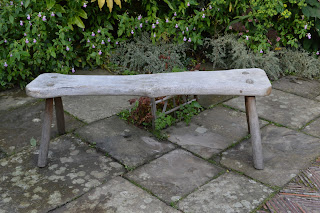 I need here to pause for a moment.  I liked this bench.  I am looking for the right bench to go by pond and this bench caught my eye. 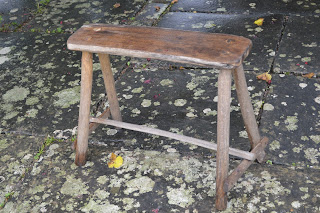 As did this one, for a moment there I got a bit bench-obsessed. 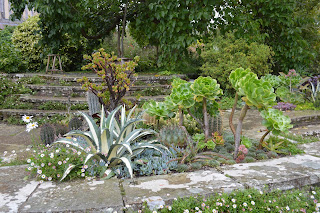 But I was soon back on track and making ah noises in front of agaves.  Did I mention I rather like aeoniums too? 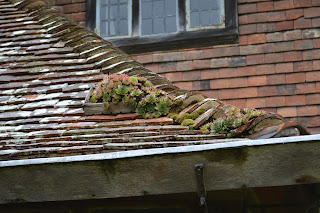 I have always loved these sempervivums on the roof. 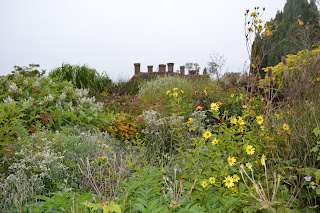 We did spend some time wandering around the rest of the garden.  In the afternoon we did get rather wet, but nothing was going to stop us making the most of every minute of this visit..... 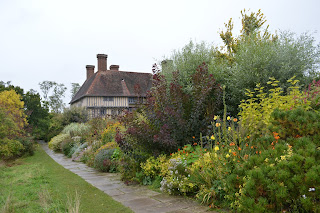 ..... for it is equally against the law not to take a photograph of the Long Border.  They check your camera before you leave (well, okay, maybe they don't, but they might).

But Alison, I hear you cry, was there not plant buying? 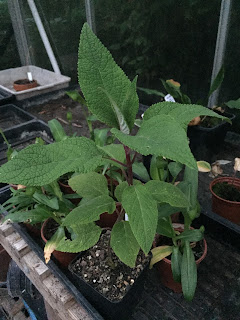 Of course there was.  I bought a Salvia conterfolia, which was the plant of the weekend. 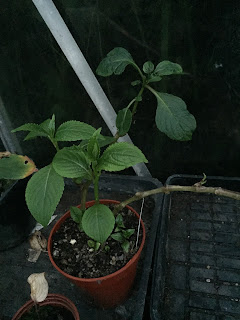 and an Impatiens tinctoria, a plant I have owned before and killed so I shall try and be more careful this time.

We then wended our way home.  We talked and talked and talked, overflowing with ideas from our weekend away.  We now have long lists of must-buy plants.  I came home and ordered three bananas and a baby tree fern (as you do) for now I have thoughts of what I want to do in my garden. 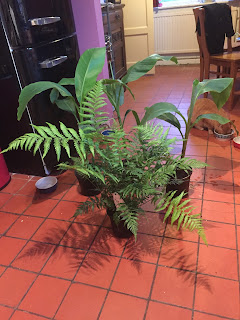 I realised that an existing banana and some bamboo might not be an exotic border, but actually they are a good start.  My Tree Lupin border is ripe for a nudge over the edge to getting just that little bit more exotic.  I think the border needs making a little larger so that will happen over the winter and next year I shall be experimenting more with planting in it.  Did I come back from my weekend inspired?  Oh yes.