A hanging basket for spring

December 22, 2019
As the winter solstice turns and the days have reached their shortest, there is on the horizon the prospect of spring.  We have winter to get through yet and I have no intention of wishing my life away, but planting for spring is always a joy.


This past year I have been rather enamored with hanging baskets.  I made one earlier this year and it gave me a great amount of pleasure watching it grow and develop.  I currently have a ready-planting basket of primroses hanging by the front door, but a few weeks ago I bought a couple of empty baskets to plant up.  I had an idea in my mind what I wanted to do and a bit of bulb buying later and I was set to go. 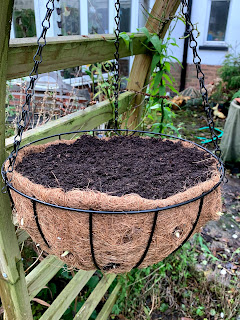 Late November I set to work.  I purposely bought these baskets as they can be re-used, I will just need new coir liners.  I poked holes in the sides and planted some snowdrops: Galanthus nivalis elwesii, into the holes.  I immediately realised my first mistake, it would have been easier if I had cut the holes before I put the compost in.  Next time, I noted to myself, next time.....

Then I placed some more Elwesii and some Tulipa saxatilis bulbs into the main body of the basket.  I topped up with more compost and finally sowed some hardy seeds on the top. 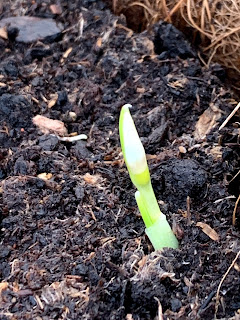 Within a week I was rewarded by an optimistic snowdrop, so happy to be planted at last it burst into life. 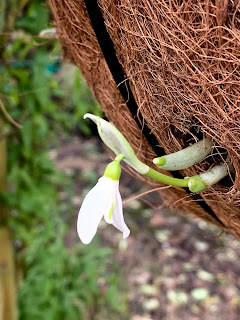 A week further on and this little love was poking its head out. 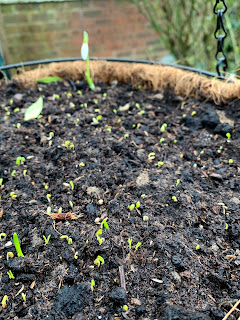 The seeds were starting to germinate as well.  This I did not expect just yet but it has been quite mild. 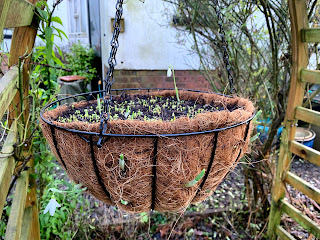 As I write this it is four weeks since the basket was planted up.  You can see the fuzz of green of the seeds germinating which is very exciting yet also a little worrying.  I am not protecting this basket at all, I am purposefully letting it look after itself.  It has managed well with a couple of lightish frosts, but January is the month of more cold, frost and usually snow.  If I never mention the basket again you will know it has headed for the compost heap, but hopefully I will report back positively.  For the hanging basket the sign of success will be if it makes it to the front door; its a bit like staying in Strictly until Blackpool, something to aim for.

Hang on a minute I hear you say, you have not said what the seeds are: no I haven't, I'm trying to create an atmosphere of mystery and wonder.  I might be overplaying that bit .......

Hang on another minute I hear you say whilst tapping me urgently on the shoulder: did you not talk in the plural earlier?  Was it not baskets?

Yes it is, yes there are plans for the other basket, but patience my dears is a virtue and I will say more in the new year.