November 10, 2019
Previously I would not have described myself as a grower of hanging baskets.  I love a good hanging basket but I always think they need a lot of attention and time that, quite frankly, I am not prepared to channel in their direction.  This year this changed. 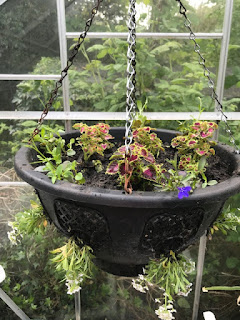 So this was how it all began.  It began with the wish to grow a trailing coleus.  I did not know that there was such a thing as trailing coleus but a friend mentioned them to me and so I looked them up.  I tracked down 'Great Falls Angel' being sold by Suttons and bought a pack.  I had a hanging basket in the greenhouse that had been part of a trial from a few years ago.  I dusted off the cobwebs and pondered what else I would plant with the coleus of desire.  Alyssum and blue lobelia sprang to mind, the plants of my childhood.  Suddently there was a 1960s vibe to the whole project and it just had to be.

When the plants arrived I planted up the basket and it up in the greenhouse as it was still too cold for the plants to go outside. 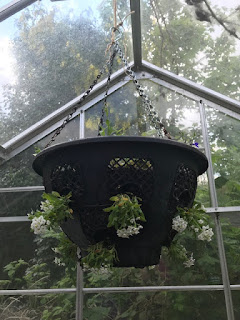 It was quite heavy so I hoped it would not collapse the greenhouse.  Thankfully it did not. 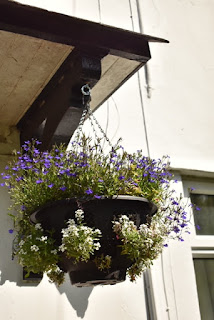 a hook was drilled into the porch and the basket was put outside.  There was still a lot of basket showing but the plants were growing well. 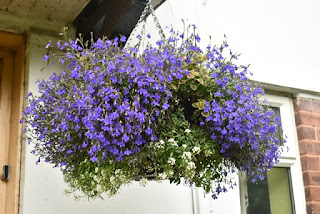 Weeks passed and I continued to remember to water it and feed it.  The blue lobelia started making a bid for world domination. 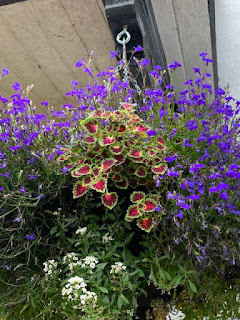 The coleus at this stage was not hugely trailing, it was more leaning with intent.  I liked the colour nonetheless and was pleased with the results. 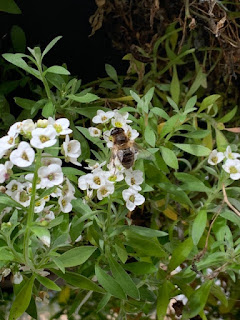 What I did not expect was how much the pollinators would love the basket.  It was silly of me not to think of this, a flower is a flower is a flower whether in a basket, a container or the ground.  This made me enjoy the hanging basket even more.  I realised I had added a substantial amount of additional flowers into my front garden. 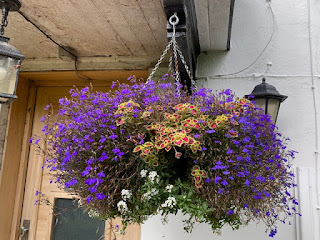 A few more weeks and the lobelia was still dominant but the coleus was now starting to make itself seen.  The alyssum did not enjoy being the underdog and I noted this for next time. 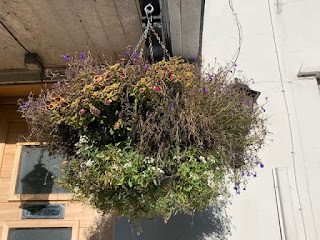 Then the cold and the frost arrived and it was all over. 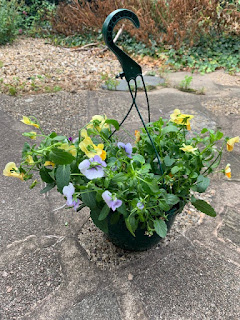 No no no, not it is not all over.  I enjoy having the flowers so much that I bought this pre-planted basket from Thompson and Morgan.  Now I am going to say the basket is rather plastic, but I do intend to reuse it. 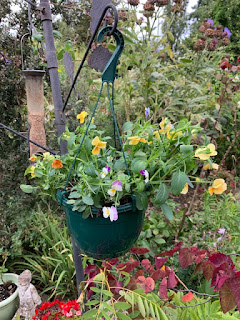 I hung it on the bird feeder before whilst the other basket was in situ. 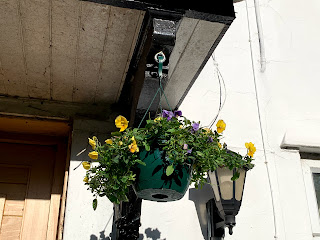 It is now in place at the front of the house.  The violas are supposed to grow down and hide the plastic basket.  I will let you know..... 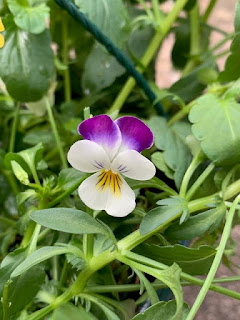 Even if it does not, I have the cheerfulness of violas at my front door and this makes me very happy.

For I have become a woman of hanging baskets.  I am already thinking ahead to what I might do next year.
blue lobelia Coleus Great Falls Angel Hanging basket trailing coleus white alyssum