January 31, 2019
The first month of the year is complete already.  We have had thick frappe rain, cold frosty icy days and a smattering of snow with more due: it feels like winter has finally kicked in. 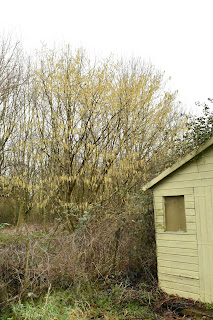 In the driveway the hazel tree that is the other side of the fence is festooned with catkins.  This tree is invisible for eleven months of the year but for these few brief weeks it shines.  The colour matches the shed well (yes the shed needs repainting) which is completely accidental but makes me very happy. 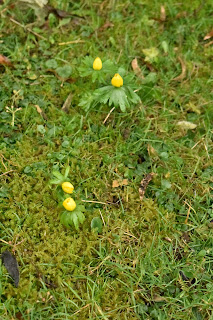 The aconite wave in the front side lawn is currently a ripple, but that they return to flower at all is joy enough for me. 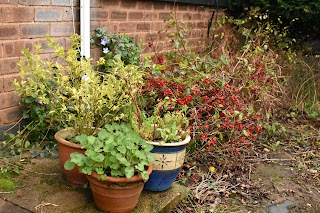 The Sarcococca confusa on the front doorstep is now flowering and filling the air with its scent and the quince hedge is probably the most covered in flowers I have ever seen it. 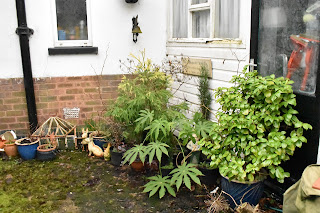 Around to the back garden and the Courtyard is looking nicely green. 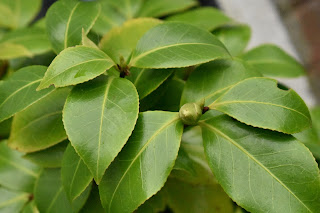 Camellia Debbie has lots of buds forming on it. 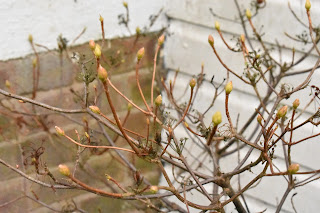 and the Rhododendron lutea is also covered in buds.  I repotted this into a bigger pot last year and it has responded well. 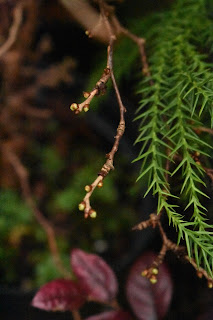 What is very good news for me (and the plant) the Prunus Kojo No Mai is alive and budding up.  I have had this tiny treelet a couple of years now, it was a kind gift from a friend.  I have tried to grow this tree previously and failed miserably.  Keeping it in a pot seems to suit it.  What I now have to resist is the urge to plant it in the garden as I suspect it might be the end of it. 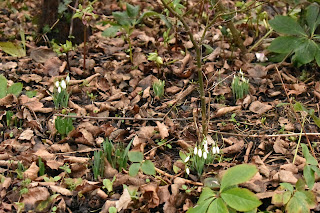 In the rest of the garden it is snowdrop time.  After several years of planting snowdrops mainly in the Wild Garden I have for the past couple of years planted some in the borders as well. The Spring Border is starting to gear up for spring.  The snowdrops in this border are from Easton Walled Gardens and are beginning to open. 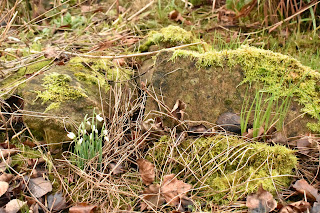 I noticed this small clump by the mossy stones in the Pond Border.  I vaguely remember planting them.  The mossy stones have very politely obliged in becoming rather mossy.  They were left over from when the pond was created.  Some stones were to edge the pond and some were to create the top of the stream that never came to be.  The result of this was some random stones that were too big for me to move.  What do you do with things you cannot deal with in the garden......... make it into a feature; hence the mossy stones. 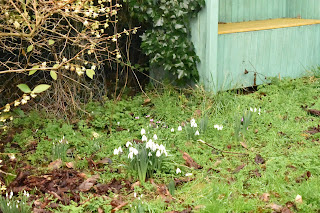 There are many snowdrops now in the Wild Garden.  These shelter under the winter honeysuckle I mention often as it is one of the best shrubs for winter flowers and scents in my opinion. 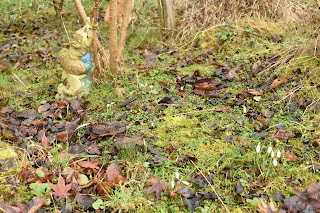 and there are more snowdrops emerging in between the Four Sisters who have recently been joined by an accordian playing gnome. 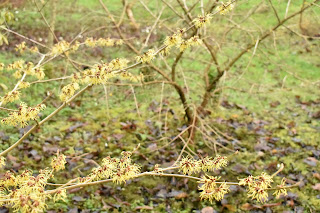 It is not all snowdrops at the moment, other plants are also having their moment to shine.  This yellow hamamelis is in full flower at the moment. 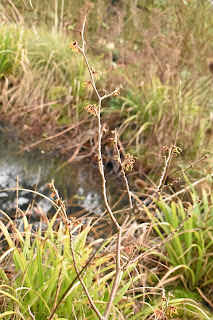 The orange hamamelis by the pond is not so floriferous but is developing into a good shrub.  When the low winter sunlight shines through it, it is a magic moment. 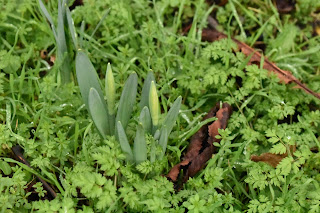 The daffodils in the Wild Garden are starting to appear. 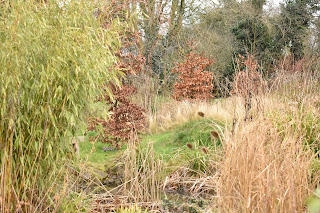 and I was stopped by this view of the garden that I rarely stop and consider.  The beech pillars are doing their job by adding colour and structure to the winter garden. 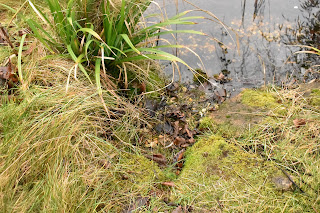 I end as usual on the pond.  It is still not quite full.  This gravelly bit is part of the low beach that edges into this part of the pond.  This is for birds to allow them to bathe and drink and also to enable hedgehogs who fall in to climb out.  I have never seen a hedgehog fall in, but if it did..... 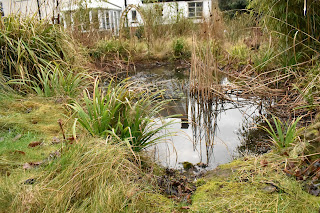 The pond is getting closer to being full and this is good.  Winter reflects darkly in its waters and I look forward to the first signs of frogspawn.

Thanks as ever to Helen for hosting this meme.
Edgeworthia chrysantha End of month review End of month view Hamamelis snowdrops