It is a foolish person who buys a plant that they know is going to get really huge and then worries when it gets really huge.  Dear reader, I am that fool. 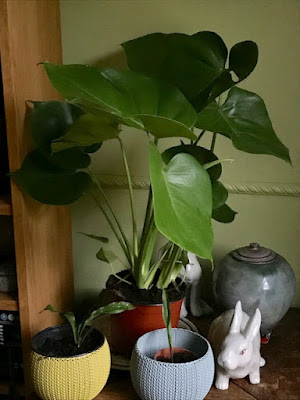 Regular readers may recall that back in 2018 I bought a monstera, a 'Swiss Cheese Plant'.  I knew that they get really big and knew that it would not spend very long politely living on the side table.  As time went on, sure enough, it got big and needed repotting and some support to keep it upright.  This was all fine.  I had a nice space for it to grow in and it all seemed in control. As with many of my indoor plants, I like to pop them outdoors for the summer, it is their summer holiday and it makes me feel a little less guilty for penning the up indoors for the rest of the year.  "run free, grow free" I whisper to them as they go outside and I swear they wave back at me with glee. 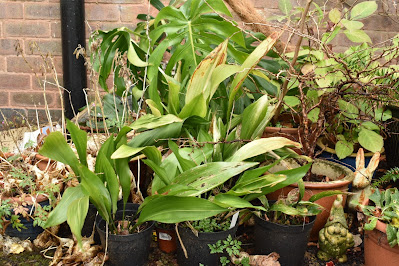 A couple of summers pass and all is good, until this last year.  In 2021 over the summer period whilst the monstera was enjoying itself, I seem to have filled the space where it would usually return to.  Well in truth it was 2020 it became displaced and of course the pandemic is at the root of this.  The monstera would live in the conservatory over the winter and be very happy there.  Now I am using the conservatory as a home office the space where it lived is now where I my desk is.  Last year I brought the monstera indoors and placed it behind the sofa.  This wasn't great, but it was ok.  It was also fortunate for the monstera as it was one of the few plants that was brought indoors before I broke my ankle which resulted in certain death for some of the larger tender plants that then could not be lifted.
This year I have filled the space behind the sofa with the cat tower, now beloved of Fluffy Pete. 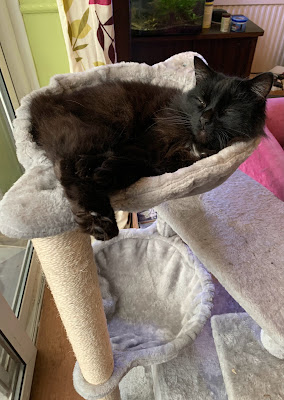 I mean, I can't move it now can I?
So that left the monstera outside and I fretted about it.  It got to the end of November and it was still outside; there had been a couple of frosts but still (surprisingly) the monstera looked ok.  It looked better than I had expected as really they should not get colder than 15 deg.
and then it snowed. 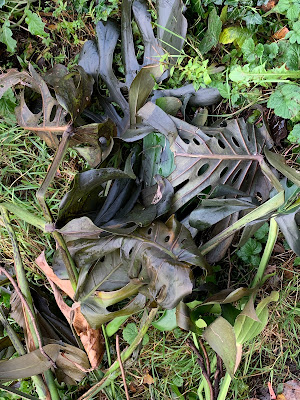 The monstera went mushy and floppy and black and was looking very sorry for itself.  "It's dead" I proclaimed and hoiked the pot from its space in the Courtyard Garden.  As I wandered towards the compost heap I observed that the stems still looked quite sturdy.  I trimmed off the foliage and decided to see it if could/would recover. 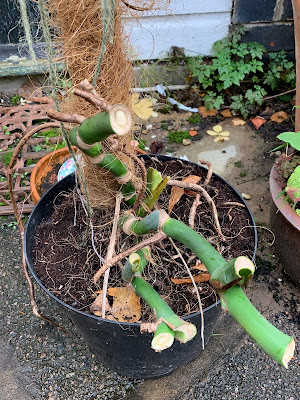 It does look rather drastic, but it is now much smaller and so easier to bring back indoors.
Why, I hear you ask dear reader, did you not cut it back and bring indoors in the first place?
I didn't think of it is the shameful reply.
Weeks passed and November became December. I kept checking the Big Cheese as I had started to call it, but there was no sign of life returning.
December became January. I kept watering BC as I had started to call it, but to no avail.
January became February- nada - not even a twinkle in its eye.
February moved inevitably towards March and at the cusp of the new month appearing ….. 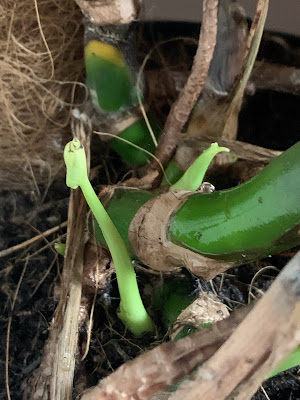 I looked closely and there are a horns of life, those protuberances that signal that something deep in the plant pot is stirring. 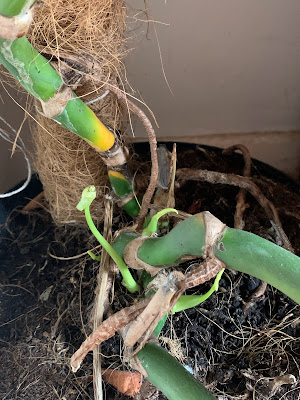 A few more days and this is very much a plant that wants to live!  The plant has pushed forward with its will to survive and decided to get back on track.   I have started giving it a little feed now to help encourage it.
Now I wonder if it would like to summer outdoors again?
Take care and be kind
For more from the Blackberry Garden follow me on Twitter Facebook and Instagram
house plants Monstera deliciosa swiss cheese plant