As with most months of this year, someone has snook in and removed at least one if not two weeks from November when I was occupied elsewhere.  The garden however is tapping its watch with it's leafy hand and muttering things about it being later than I think. 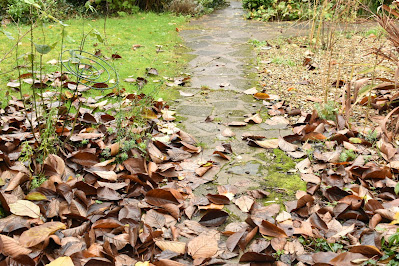 It is still a time of leaves on the path.  This is because I am tardy at removing them, but it will happen at some point.  The magnolia tree by the front gate seems to have a lot of leaves and they do not rot down quickly.  I kick them to the side as I walk through and think 'I really should move these', but thinking is not doing and doing is not happening. 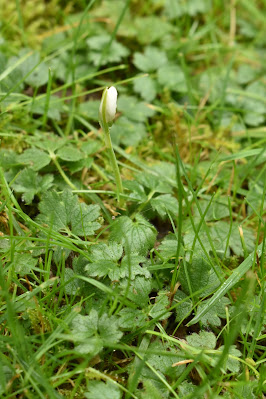 Very excitingly it is also the time of the first sight of a snowdrop.  This is in the front lawn.  You may think that a lawn should involve a higher ratio of grass to weeds, but I think ratios are over-rated. 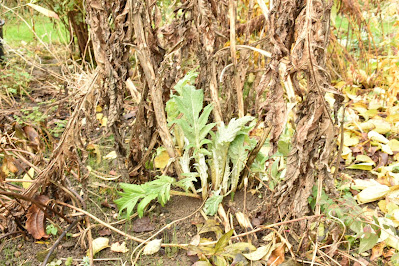 It is also the time that I get excited at seeing the new growth on the cardoon in the back garden.  I leave all the large dead stems until they fall over or until Spring arrives.  They provide good structure and good habitats for overwintering insects. 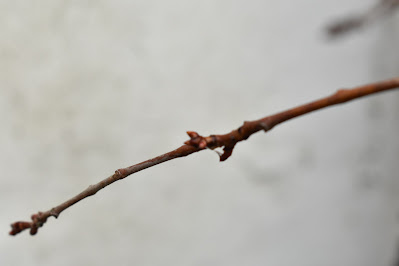 I spend a lot of time this time of year looking at the buds forming on the trees.  As the leaves fall you can see the blossom buds starting to fall on trees like this little apricot tree.  It gives me hope that, as ever, the season turns. 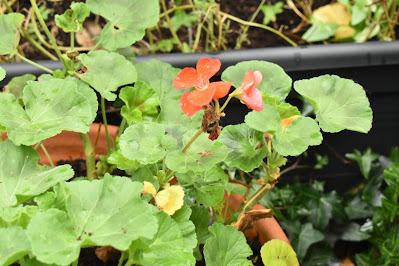 Even though it is late Autumn and we have had a frost or two, these pelagoniums are refusing to give up just yet. 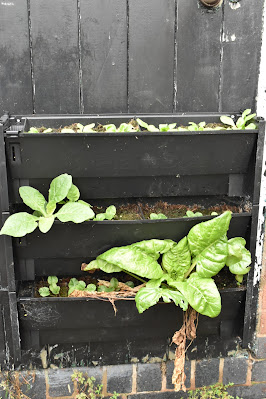 In the PlantBox living wall planter I was given to trial, the perennial spinach is growing well.  There is still a nicotiana insisting on growing and I have also planted some viola and primrose plugs so that I have colour over the winter. 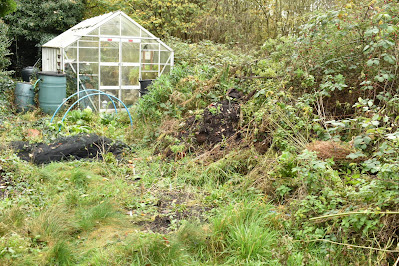 I run past the veg garden as it is what is currently described as a disaster area.  It is overgrown, full of weeds and, well, a disaster.  I need to take control of it.  I have plans to buy some woodchips to make proper paths and get a bit 'no dig' with it.  I need to stop planning and start doing (this is getting to be  a theme....). 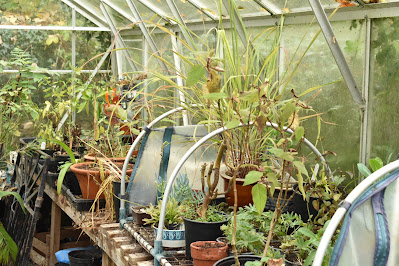 The greenhouse is fairly full of overwinterings and will soon be fleeced, the nights are getting chilly. 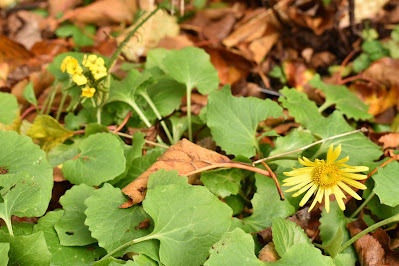 In the Conservatory Border there are signs of Spring.  The wild yellow wallflower that seeds itself around the garden is flowering and so is the Doronicum.  I love this wildflower, I was given the seeds some year ago and it reliably pops up year after year. 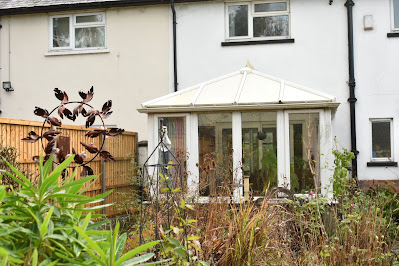 This is the last photo of the windspinner in situ for a while.  It won't take a lot of seriously cold weather and at the time of writing strong winds were due.  I decided I didn't want it damaging so took the top off and stored it in the shed. 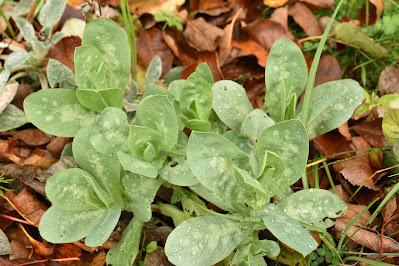 I have to watch where I put my feet as I walk into the border as the hardy annuals are proving their hardiness.  These cerinthe seedlings are growing strongly. 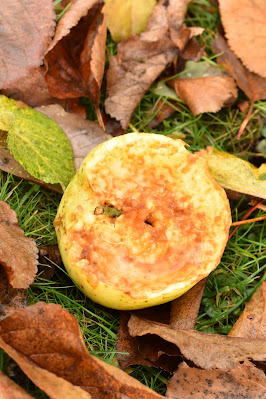 I also walk around the pecked apples on the lawn.  I move them to the side generally, but I don't clear them away as I want the birds to have them to eat. 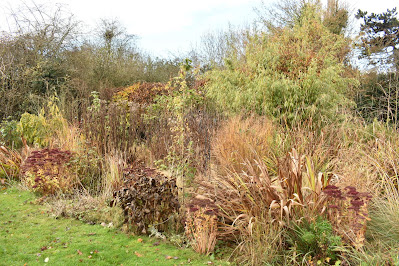 The Pond Border is still demonstrating how wonderful sedum can be this time of year.  I love the structure and rhythm they bring to the party. 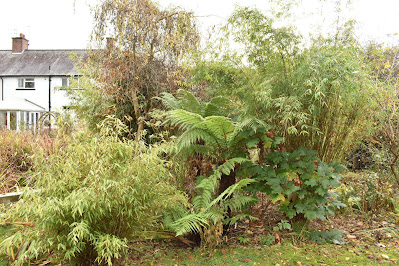 The Tree Ferns in the Exotic Border were not fleeced up yet when I took this photo and are growing well.  They will soon be put to bed for the Winter and the two baby ones that live in pots are already safely under cover.  The very small ones have not built up enough maturity to even risk trying to overwinter them outdoors. 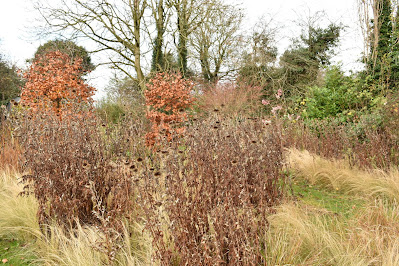 The Prairie Boards are looking good as they always do in Winter, though.... 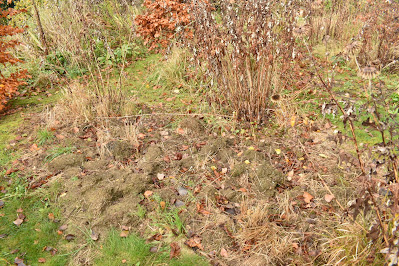 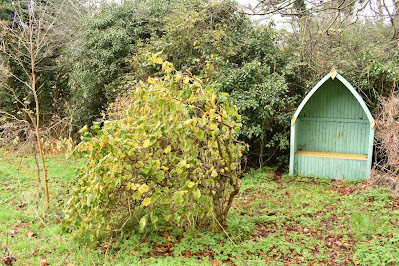 The contorted hazel is now a very fine shrub.  It was very slow to get going but now is rather wonderful.  I have to cut out the hazel shoots that come from below where it is grafted that are straight and fast growing but otherwise it needs no fussing from me. 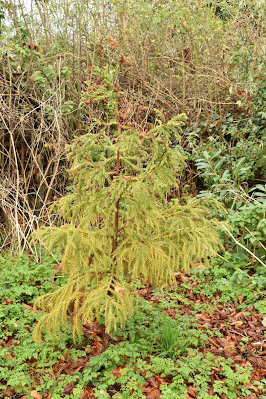 The Crytomeria sekkan sugi that spent so many years in the Courtyard Garden in a pot is happily settling in to the top of the garden.  It looked decidedly like it was dying earlier this year so I shoved it (technical term) into the Wild Garden to see if I could rescue it.  I kept it watered over the summer and it looks like it has pulled through, well at least for now. 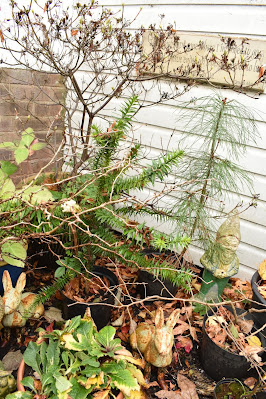 Meanwhile in the Courtyard Garden the small monkey puzzle tree and the Pinus mugo are still in their pots and still growing well.  In the Spring they will probably need to go into a larger pot again.  Maybe one day they will be released into the garden, but not yet. 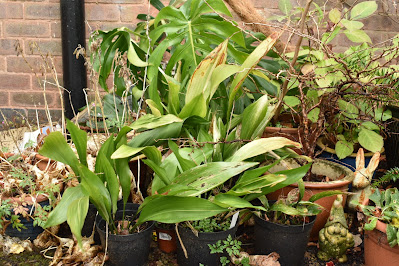 The Aspidistras are now refusing to come back indoors, they see no reason for such a move and so I acquiesce to their demands.  The eagle-eyed amongst you might think one of the aspidistras looks rather like a monstera plant.  This is of course ridiculous as that would rely on someone having put the monstera outside for its summer holidays and then decided it was too big to go back into the house.  I feel sorry for it as I await its inevitable decline, but it has got through a couple of frosts already..... 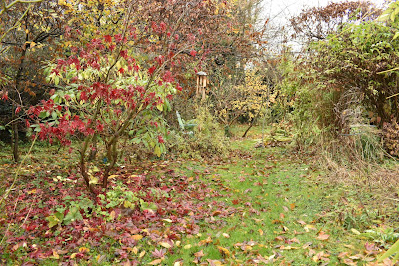 The Carol Klein acer is in that wonderful moment where most of her leaves are on the floor and creating a beautiful red effect. 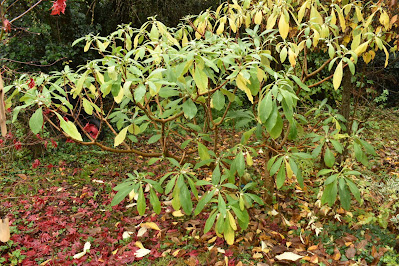 The Edgeworthia is laden with buds and getting ready to indulge me over the Winter months fussing over her and hoping that she will survive.  Who knows what kind of Winter we will have this year?  Will it be soggy, will it it be snowy, will it be a deep freeze or all three?  Time will tell. 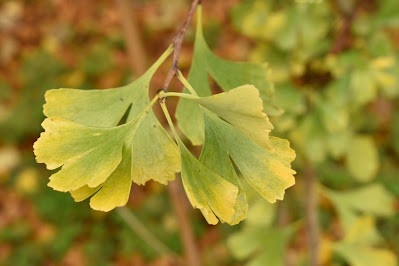 The Ginkgo in the back garden is starting to turn.  It is far behind My Beloved Ginkgo that lives in a pot who has already shed all his leaves. 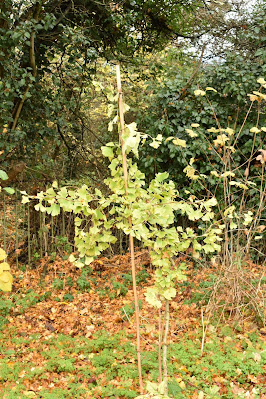 This ginkgo was bought as a small twig a few years ago and has decided he has put down his roots and now will grow.  I have had to encourage it to stand straight, but it is now coming on rather well. 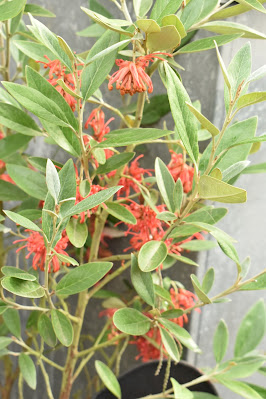 One of my favourite impulse buys, the Grevillea victoriae, is flowering well.  She is still living in  pot and seems to benefit from being by the warm house wall. 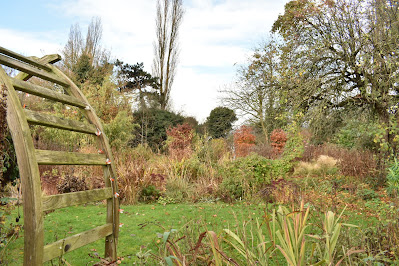 I stand in my favourite spot to enjoy this view of the beech pillars, now one of the highlights of my autumn/winter garden.  Planted as 18 inch tall twigs when the garden was still young and now definitely one of my better decisions. 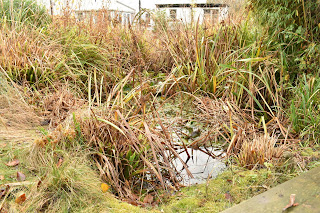 I finish as ever with my pond.  Not as full as I would have expected (query, is it leaking? *adds note to list).  The pond looks a lot better with less Carex Pendula overshadowing it.  One of the Winter jobs will be to remove more.
Now we ride headlong towards the shortest day and there is still much weeding to be done.  I know some people do not garden in the Winter, but what a joy they miss.  If the weather permits I shall be out there, getting on with getting on.
Stay safe and be kind
For more from the Blackberry Garden follow me on Twitter Facebook and Instagram
Crytomeria sekkan sugi Edgeworthia chrysantha End of month review End of month view gardening