It has been a while since a new area of the garden has been developed, really quite a while.  It would have been even longer but this new Evergreen Corner has happened almost by accident.  Well, maybe not accident, it is more a series of actions that suddenly melded together and has become a thing. 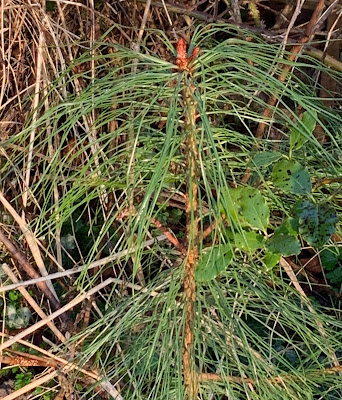 and let us not forget, if there is one thing I have always said it is that I am not keen on it is evergreens.  I dismiss them with a the briefest of gestures and a barely disguised sneer.  Except, of course, for the ones that I like.  I am sure you will understand how this works.  You know those things that are firmly in the category of disliked and yet seem to sit inside of the boundary which makes them acceptable.  Of course the boundaries and where plants sit within and without are totally subjective, at prey to whim and rarely if ever consistent.  T'was ever thus. 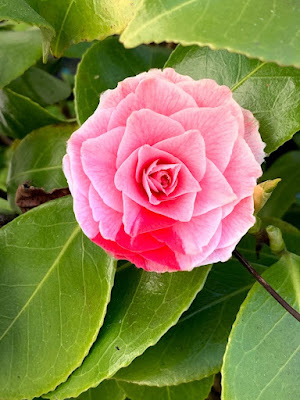 For an example I offer you the camellia.  The camellia is an evergreen, stays green all year and yet I never think of it is as such.  This is because I like it and it does not fit with my general opinion of not liking evergreens. 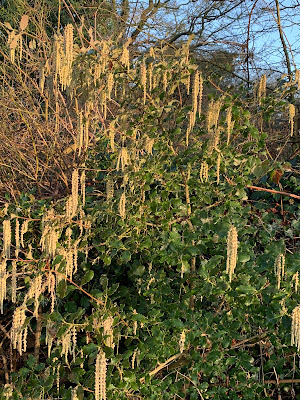 So how did this corner come about?  Well the Garrya was the starting point I suppose.  It pre-existed my buying the house and did well to survive as long as it has.  I was not a garrya fan, but it has won me over and is now a fine plant.  It has earned its place and instructed me in the 'evergreens are not always dull' lessons I needed to observe. 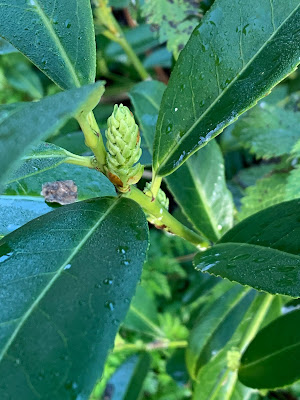 Then the small laurel was added.  I am not a fan of laurels generally.  Generally I regard them as one of my primary bête noire of the evergreens as they are green and just sit there.  Except, as you can see, they do flower if allowed to.  I have reprieved the original laurel that I have tried (unsuccessfully) to remove from the garden.  It has been allowed to grow and flower and it fills a reasonable space in the other corner at the top of the garden.  I planted this small laurel by mistake.  For no reason  I can explain at all I thought it was a rhododendron.  This is despite its foliage looking nothing like a rhododendron and that I am completely aware of what rhododendrons look like.  I cannot explain how this happened, it was very small, it had no label and in my excitement I thought 'oh look, a rhododendron' and planted it.  Sigh.  Anyhoo, once the mist lifted from my eyes I understood what it was and allowed it to be.  Had it been a variegated laurel this would never have happened.  They are still highly disliked. 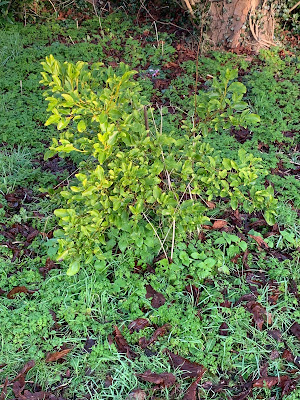 This is the Griselinia littoralis, a very slow growing tree that has been in the garden for many years now.  You may know of this plant as a hedging plant, but if you visit Portmeirion you will see it in its full glory as The Dancing Tree, this is a tree to stand by and marvel at.  I know that the chances of mine ever reaching such delights are slim, but I grow it nonetheless and whisper encouragement to it of what it could become. 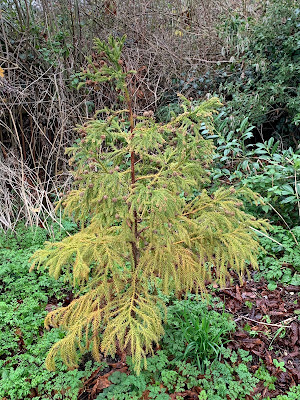 Suddenly momentum was building.  The Cryptomeira sekkan sugi came next.  I have written previously about how in the last twelve months I have released it from its pot in the Courtyard Garden.  I am hoping that it will thrive in its new position at the top of the garden.  It was with the addition of this small tree that this part of the garden started to really become something.  The cyptomeira inspired me to think of the plants around it and what could be around it.  Then the corner development picked up speed. 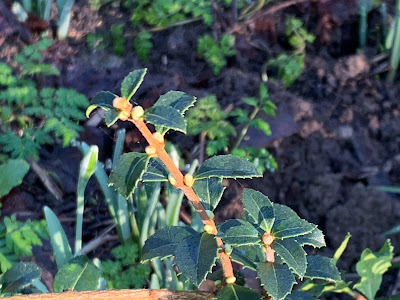 I went back to the Courtyard Garden and selected the Osmanthus as next to be planted out.  This shrub flowers in Spring and is a highly scented but was far too small to be planted out when I first bought it.  Now it is big enough I think and should hopefully enjoy having more root room.  Of course I shall miss having the scent in the Courtyard Garden so I will have to think of what to replace it with.  Every gap created is a new opportunity. 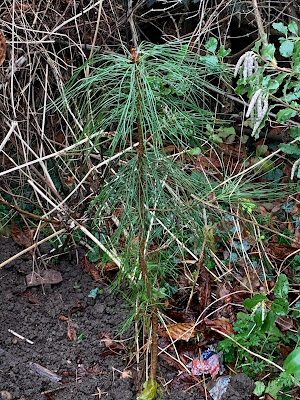 When considering my dislike of evergreens and conifers in particular I realised that in reality is it a small group of conifers I am not that keen on.  Pine trees are rather wonderful and I have come to love their architectural delights.  Look at the length of the needles?  These are almost knitting needles!  I planted the Pinus mugo into this corner that has so far been a little problematic.  Previously my beloved ginkgo was planted in this corner.  I find this corner a little bare and in need of something big.  I am hoping that this tree that has put on good growth whilst still in its pot, will now revel in its new found freedom. Ah Voila!  I have an evergreen corner.  I know it does not look like much at the moment but I am hopeful that they will grow well together, filling the gaps and being, well, a nice green corner.  Long may it remain...... green?

It is no coincidence that most of these plants have been growing in the Courtyard Garden.  One of the reasons for planting up the shady concrete gap between the conservatory and the utility room is that I wanted to see green in that space rather than concrete.  I wanted plants that could cope with hard conditions and would give me something to look at throughout the year.  Yes, the very reasons I am not keen on evergreens, I wanted that consistency of look that I do not insist upon from any other part of the garden.  Not all the plants in the Courtyard Garden are evergreens, there are deciduous and perennial plants in there too.  But these plants formed key parts of its backbone.  The Courtyard Garden is in a state of flux at the moment, but more of that on another day.....