A day of fog, fudge and reindeer

It has been my habit to go to Calke Abbey with a good friend for their food/gift fair on the last weekend before Christmas for several years now.  I am not sure how many years, but it is a good eight or nine.  It is a firm tradition for my friend and I to go, wander the gardens, buy fudge and then finish up at the garden centre down the road to see if there are any good plants on the 'rescue me' table. 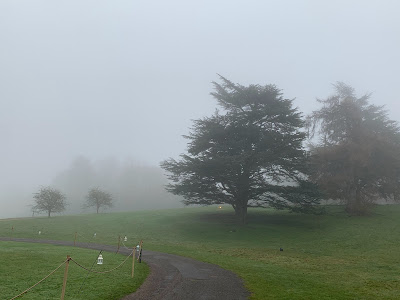 The day of the fair arrived and it was foggy.  Not only am I a 'snow wimp' I am also a 'fog wimp'.  It might sound like I don't like driving in weather and if I think about this too much I might agree.  I once had a very scary drive from Leicester to Nottingham on the A46 (drivers of this road will know the route).  I know the route very well but in thick fog it was very frightening and all I, and the other drivers on the road could do, was drive very slowly.  This is not an experience I wish to repeat.  The day of the fair was foggy but I was not going to let this deter me.  I decided to keep an eye on the weather and if it felt it was getting worse then I would set off for home.  Fog is a tricksy thing as it was much worse in some parts and not so in others.  As long as I took care (and I did) it was ok. 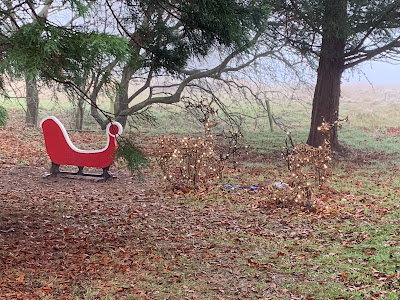 I have been visiting Calke Abbey itself since it was first opened by the National Trust, I know it very well and it makes an enjoyable walk.  They always do Christmas well and even on this damp, dank, day the lights throughout the grounds made me smile. 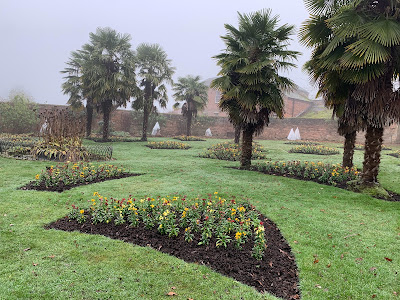 In the Walled Garden the wallflowers were flowering.  This prompted the sort of conversation that gardeners have.  Firstly we considered that they might be flowering as the weather has been so mild.  This is of course very possible but mine are not in flower yet.  We then considered whether they had been 'brought on' by growing in a greenhouse before specially planting out for the Christmas opening.  This is possible too.  Either way, they are a joy. 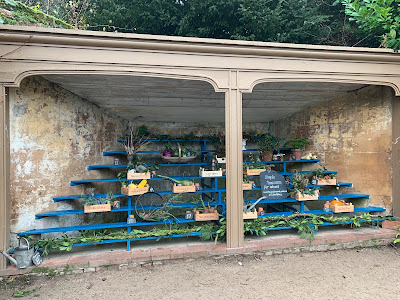 It is, as we all know, against the law to go to Calke Abbey without paying homage to the Auricula Theatre, which is currently displaying autumnal produce from around the grounds and gardens.  I love how they ensure that whenever you visit Calke, be it auricula season or not, they always make good, imaginative use of the theatre. 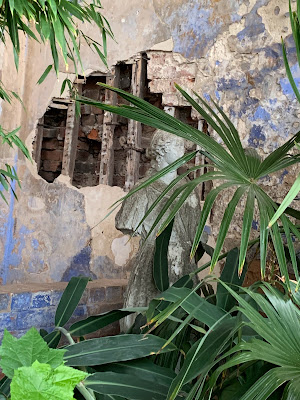 We called into the Orangery to say hello to Agnes.  I don't know her real name, but Agnes seems to suit. 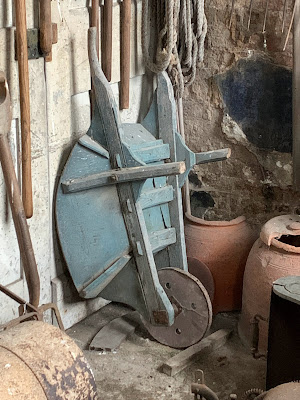 We then called into the potting shed where my eyes fell upon this blue wheelbarrow.  I have never noticed it previously, which does not mean it had not been there.  One of the joys of the potting shed is that there is so much in there.  Isn't it lovely?  I now want a pale blue wooden wheelbarrow. 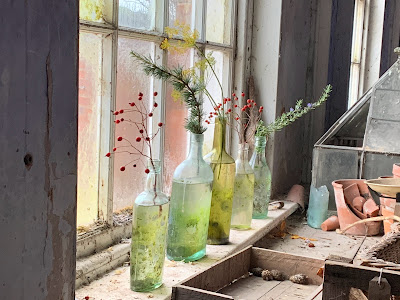 I also enjoyed this simple but so pretty display on the windowsill.  I never have the imagination to do little displays like this and I admire greatly those who do. 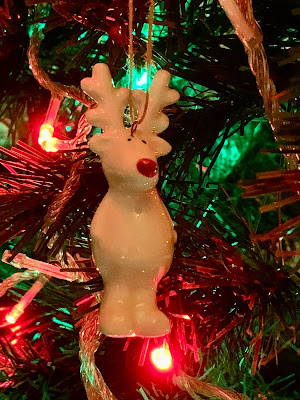 Then we popped into the Christmas Fair, the excuse for visiting this time which was the least busy I have ever seen it.  This felt safe from a Covid point of view but is very bad news for the stall holders trying to make their sales.  I do feel for them.  Fudge was bought (fudge has to be bought, it is the law) and I also bought this decoration for my Christmas tree, I tried not to buy it but failed, it is too cute and begged me to buy it.  The decoration has led to far too much wondering what the plural of reindeer is, only to be followed by what the singular of reindeer is (clue: it is reindeer).  Anyhoo, its a nice decoration and a nice reminder of a good day out.
After much talking and walking and a picnic lunch (the cold dank weather was not going to stop us).  We then moved on to the second part of our tradition.  We went on to the Ferrers Centre and the garden centre at Staunton Harold.  We had a hot chocolate with cream and marshmallows and cake (very good cake) and perused the various craft shops.  I nearly always buy something from the pottery in the corner, they always sell such wonderful things. 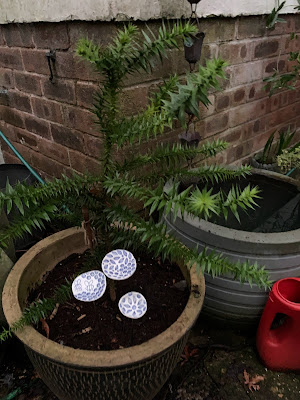 This time I came away with these three porcelain small dishes on stakes.  They are just so pretty. 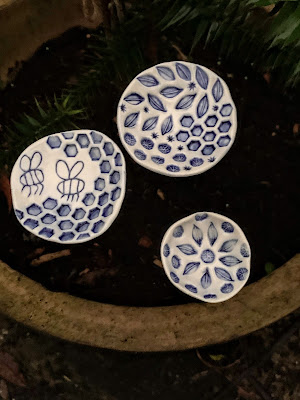 I could not resist them.  I popped them into the pot to keep the Monkey Puzzle tree company.  I imagine rain dripping from them, I will look forward to that (which does mean looking forward to rain, but oftentimes I do).
So whilst things are still difficult and staying safe still very much matters, it really mattered that we got to carry out our tradition this year.  It felt normal, not words often used at the moment.
Stay safe and be kind.
For more from the Blackberry Garden follow me on Twitter Facebook and Instagram
Calke Abbey Christmas Fair christmas tradition Ferrers Centre Staunton Harold