Ah my dearest Clivia - how I have wronged thee. 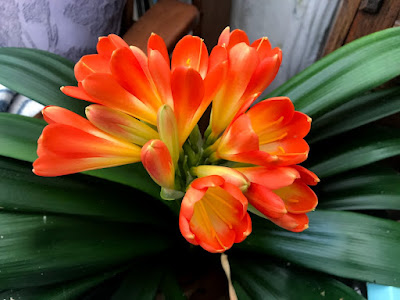 I remember so well that day when we first met, way back in February 2016.  I bought you from a plant sale at Little Ponton.  I had wanted one of you for a few years and the opportunity to buy a bargain plant was not going to be missed.  You came home with me, I loved you, I looked after you.  I let you Summer outdoors and Winter indoors. 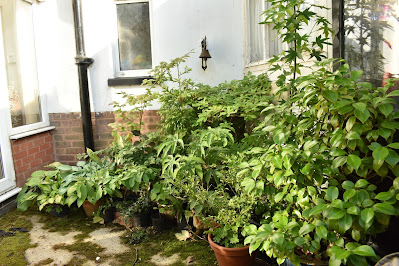 and then my dearest Clivia, I made a mistake.  I decided to place you outside in the Courtyard Garden for the Summer as usual and I repotted you into a large ceramic pot.  I have not got a photo that shows this, which indicates I think I knew this was not my brightest idea.
Why so? dear reader I hear you ask.  Well, it was a large ceramic pot.  It was a heavy ceramic pot.  It was heavy before the compost went in and just not movable once the plant was planted within it.  I realised this pretty swiftly but decided I would repot the Clivia into something lighter in the Autumn and move it back indoors as usual.  I had a plan and I like a plan.
The plan went wrong.
Some of you may recall that when on the way back from a walk to Kirby Muxloe Castle last year on Hallowe'en I broke my ankle.  This made life challenging for a few weeks and in relation to the Clivia and several other tender plants, it was a death knell.  I could not get them indoors for the Winter as I could not lift anything heavy until my ankle was fully healed.  I looked at them through the conservatory window and apologised time and time again as I watched them freeze and die.
In the Spring I furtled about in the pot to see if it was dead, and whilst it was quite rotted the roots did not seem totally lost.  I kept it watered and fed and hoped.
Nothing happened.
In late summer I decided to stop walking around this large pot of unhappiness and compost the Clivia.  I dug it out of the pot and.....
there was a sign of life, a little leaflet forming and heading for the sunlight.
I trimmed the roots to remove all the dead.  I repotted it into a smaller pot and popped it into the greenhouse to give it some extra warmth and..... 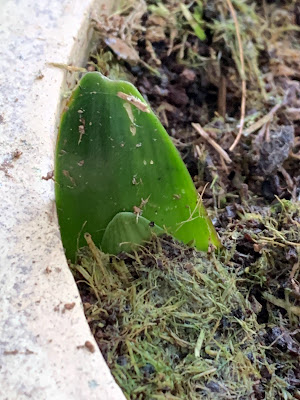 she lives!  The Clivia is now the conservatory to overwinter and recover but I have great hopes that one
day she will flower again.  Sadly several others of the tenders  were not so lucky.  (sorry Ensete ventricosum and brugmansia.....)
Stay safe and be kind.
For more from the Blackberry Garden follow me on Twitter and Facebook
clivia tender perennials