The Snowdon Chronicles - to Kirby Muxloe Castle and back......

well, nearly back anyway.  This story does not have a happy ending but until we get to that point it was a great day.  Regular readers will know I am currently in training ahead of my nighttime trek to the summit of Mount Snowdon and back in order to raise money for the horticultural charity Perennial.  In this dreadful Covid year they have had to cancel most of their fundraising events so this is my way of trying to help in any way I can. 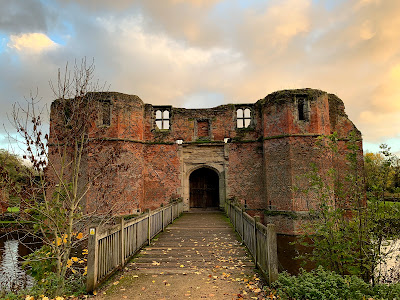 I live just outside Leicester, close to the motorway and a large retail park.  It was therefore a surprise to discover I lived within walking distance of a moated castle.  A longish walk, 2 or 3 miles there and the same back, but walking distance nonetheless and with the need to build stamina to trek up a mountain this seemed like a good walk.  At the time I was walking Boris was imminently going to announce bad news about another lockdown so being outside on a pleasant autumn afternoon seemed a good plan.  The news would be the news no matter when I learned about it. 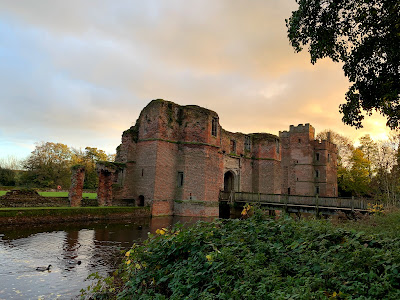 The day had started with Storm Aiden and been breezy and rainy, but now the sun was out and it was lovely.  It was quite muddy underfoot in places but nothing serious.  We walked there along the roads, through a park and followed the route of the stream that feeds the moat.
The 'castle' is run by English Heritage.  You cannot go into the castle at the moment but you can walk around it and that is good enough.  It is a fortified mansion rather than an actual castle, but as Leicester Castle has completely gone except for a grassy mound, this is good enough to be a castle for me.  It was mainly built in the 1480s but its owner, William, Lord Hastings, was executed by Richard III (yes, he now of car park fame).  It was never completely finished but was lived in until the 17th century.  The castle went into ruin until the early 20th century when it was started to be conserved. 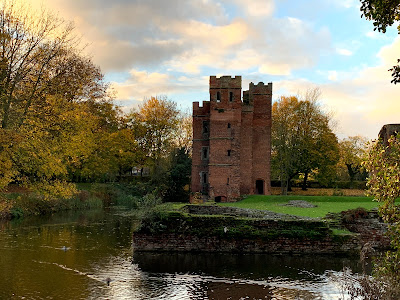 It is very atmospheric and the sun was just starting to decline whilst we were there. 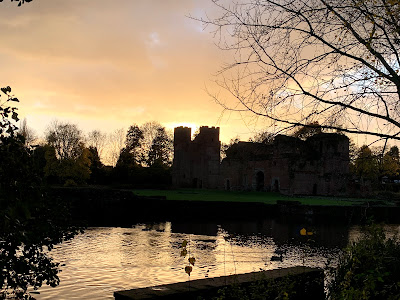 We had a lovely walk there and decided to walk back along the footpath that went along the fields nearby.  This would have been fine...... 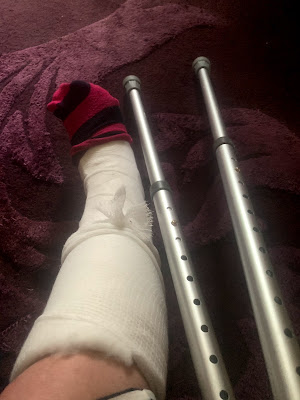 ....except I tripped over a tree root and broke my ankle in two places.  Luckily my daughter was with me and a good friend rescued us.  An evening in A&E later and I am out of action for six weeks.  The silver lining, if that is the right phrase, is that at least we are locked down for four of those weeks so there is no where I should be.   I can also keep working from home whereas in previous years this would have been very unlikely.  So I keep telling myself it could have been worse.
This has put a pause on anymore walks for a few weeks which does worry me.  I enjoy my walks and I am so keen to complete this challenge.  I should be fully healed before the trek and I have proper walking boots I will be wearing which will protect my ankles, so I feel paused not stopped.  As ever though I do need people to support me if they can.  The trip is fully paid for so all proceeds go directly to Perennial.  My Justgiving Page is here.  Rather excitingly I have now passed the half-way milestone to making my target.  I have achieved 60% of the £300 I wanted to raise.  I imagine none of you will be surprised that if I do reach £300 I will raise the target so I can keep going.  I am keen to raise as much as possible.
As soon as I am able to walk again I will start building up my strength, so I will continue to you update you on my walking adventures (with hopefully less drama in future.....)
Stay safe all and be kind
The full story of this quest can be found here
fundraising King Richard Kirkby Muxloe Castle Mount Snowdon perennial Snowdon challenge William Lord Hastings