Over a year ago I wrote about my beloved ginkgo (as it is generally referred to) and how after several difficult years it had reached a point in its journey where a decision had to be made.  I could leave it to follow its clear trajectory to die or I could do something to try and rescue it. 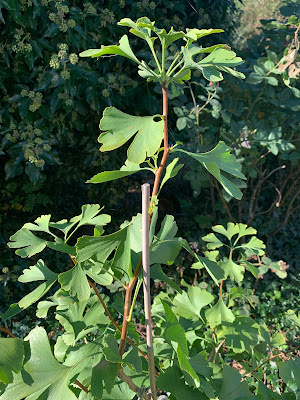 I decided to try this rescue in the full knowledge that such an action may result in hastening its death; but if the outcome is death anyway I felt this was a risk worth taking.
You may recall that last year after replanting my beloved ginkgo looked like this... 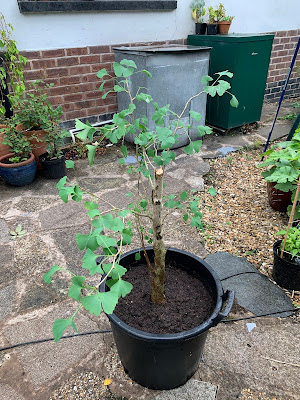 The the main stem was cut to below where it had been damaged in a fire some years ago.  The tree itself was looking rather sparse.  This current year my beloved ginkgo has grown strongly and I noticed that there was a strong straight tall branch that had emerged from fairly near the base that I could tie in to become a new leader for the tree.  I did not know if this was work, but it was worth a try. 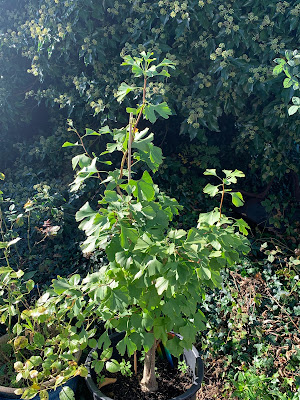 Well, la-di-da - just look at how well this has worked.  This has greatly improved the shape of the tree and this branch alone must have grown 30cm this year, which I take to be a very good sign. 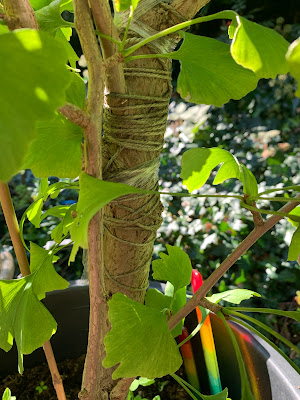 and is the bark still peeling away I here you ask?  No, well I say no, what I mean is it has not got any worse over the last year.  It is still wound with twine and this seems to have done its job well. 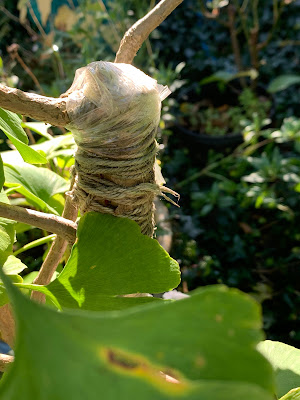 Similarly the grafting tape hat is also still in place and this seems to have worked well.  I made this little hat as I was worried that rain might get into the top and make the tree rot downwards, but so far so good.
Last year when the tree lost its leaves in autumn I wondered whether they would ever reappear in spring.  This year I feel more confident that all will be well.
I am not at the point where I think I can replant the tree back into the garden and I have to say I love it being by the back door where I can keep an eye on it. Here is to the next twelve months, let's hope my beloved ginkgo continues to thrive.