June 24, 2020
I have mentioned several times my beloved ginkgo.  Years of love have been poured into this tree and to say it means a lot to me does not come even close. 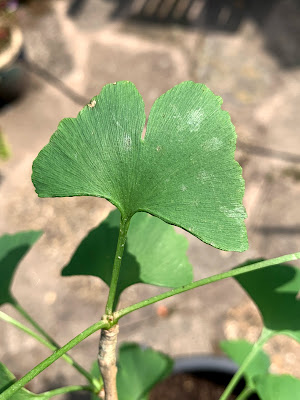 I cannot remember when I bought this tree, it could well be twenty years ago as it was several years before I moved into this house.  In my previous house this tree lived in a pot by the back door.  I had no backgarden at this house, just a back yard and a long narrow front garden.  I always promised the tree that when I moved to my forever home (not that anywhere is a forever home but....) that I would plant it into the garden.  This promise was kept.  It was one of the first plants to be planted into the Blackberry Garden.  It was was planted at the top of the garden into a nice corner and there it lived.....
.....unhappily.  This was not a lucky spot for it.  Firstly there was a fire that damaged it fairly badly.  It was a long hot summer and some people thought it quite funny to set random fires in the area around the school I back onto.  The fire was not set in my garden but it travelled.  The fire brigade put it out but the damage was done to my ginkgo. Thankfully this tree wants to live and so it started to regrow but the top of it never recovered.
A couple of years later and it suffered another set back.  A large black poplar used to sit behind my garden and bits started to drop off it.  The contractors who cut back the tree, against my specific wishes, dug up the ginkgo and then put it back.  They were trying to do the right thing but I had told them not to.  They thought I would not notice that the tree suddenly faced the wrong way.  sigh.
Fast forward to a couple of years ago when I had a bit of  wobble and thought I might move house.  I didn't and that is now history but it set a seed in my mind that I could not leave the ginkgo behind.  I had originally thought I could leave it, but it was too much to bear.  I kept walking up the garden to see it, wondering if moving it again was the right thing to do or not.   I could not decide whether another shock might be the end of it?
The other day there I was, pondering this question yet again.  I was looking closely at the tree, it has quite a few shoots this year but the bark was looking loose on the trunk in places.  This worried me.  This worried me a lot.  Damn it, I thought, I am going to transfer it to a pot to see if it will help it gain strength. 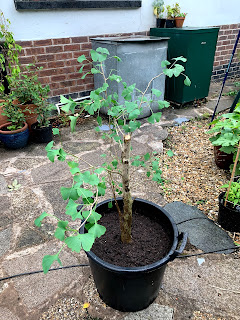 I thought it would be hard to dig it up, but it was not.  To my horror the roots were still wound up in a root ball as if they had just come out of the pot.  There was also still damage from when it had previously been dug up.  This convinced me that I was not doing the wrong thing.  So up and at-em, it easily came out of the ground and was plonked into a large 50l container.  I watered it and tidied off a couple of dead branches.  Then I turned my thoughts to the bark issue. 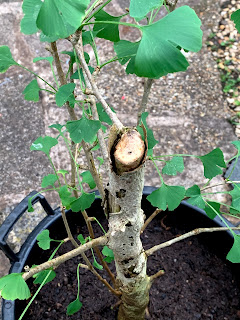 At the top it was a bit loose and papery, it was not coming off big chunks but there was a couple of holes in it, maybe squirrel nibbled.  So I decided to try and stop the damage getting worse and give it a chance to recover. 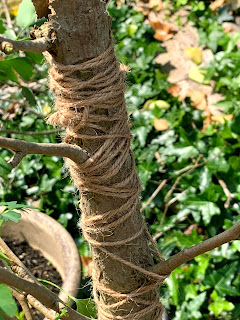 I bound it with twine.  You may laugh, you may say this is pointless and futile.  The problem is I sort of think the same but at least it made me think I was trying.  I worried about the tree further and decided to find my grafting tape.  A couple of years ago I damaged a branch of my pin oak tree and I bound it with grafting tape and it healed rather well.  With this in mind I thought I would see it if would help.  Of course when you want something you can never find it (ok, that's just me then).  I knew where I keep it, but it was not there.  A quick online order later and..... 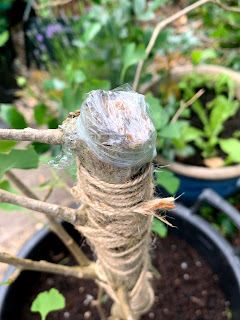 The ginkgo has obtained a little grafting tape hat to try and keep too much moisture getting into the top whilst it heals.
I am hoping the combination of grafting tape and twine it gives it a change to stop the bark peeling further and that the tree can gird its loins a bit.  Time will tell...... 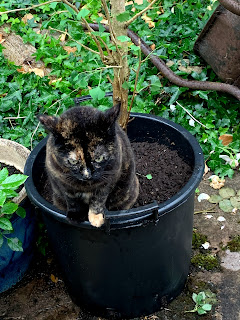 and Esme will keep fierce guard on it until then.
Stay safe all.
Container planting gingko