Ghost of the railway worker

You may be relieved to know that I am nearing the end of this saga, a tale in six parts (yes, that means one more). 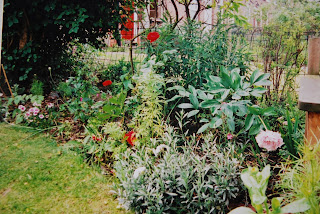 The garden I moved to next was the most significant for me.  In this garden suddenly my interest in gardening that was clearly always there developed into a full on, no holds barred, obsession.  The house was very small and originally built as a railway workers house, quite literally a two up, two down.  The garden was mainly at the front, it was 60 foot long (I know this as when I created the path along it I measured it) and there was a small, Victorian, blue brick back yard out the back with a couple of borders in them. 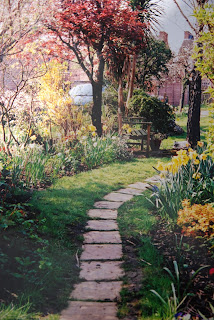 In the back yard there was a very productive asparagus crown.  To my shame I never ate any,  I let it grow into its ferny magnificence every year.  It was only later I realised I was missing a treat.

The front contained a lot of shrubs and heather when I moved in.  It was largely grass with bits of borders.  When I left it was a thin strip of grass with much larger borders containing roses, perennials and a beautiful tree peony.

I did take the tree fern (the now sadly deceased tree fern) when I left, but otherwise I left the garden.  Whilst I drive past my other gardens every now and again, this is one garden I will never return to.  I could easily drive up and check it out as it is largely a front garden, but the pain of what might have happened to it would be too much to bear.  Don't ask a question if you can't handle the answer is a rule of mine.

I used a lot of annuals in the garden as well.  Wallflowers in the spring, cosmos and nasturtians in the summer.

As the space was so limited I used pots to grow all manner of things.  The gingko tree lived in a (large) pot by the back door.  I grew veg in a variety of containers very successfully.  The twisted hazel and the olive tree lived in pots as did a rather lovely red acer.  All of these moved with me and now are planted happily in my current garden.  (I think I have killed the olive tree, moving on....)

This house was the first one I had ever owned that was just mine. I came to realise quickly I was incredibly territorial about it.  It  was my space, I would do what I wanted in it and the freedom that gave me was intoxicating. 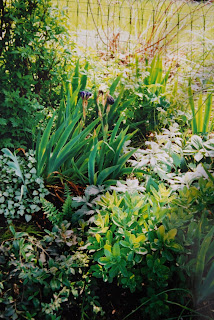 It was at this time I began writing my garden journal, but that will be the subject of a future post.

I loved this garden, it meant the world to me.  After about five years I came to realise though that it was becoming too small for me.  I cut my teeth on this space but now it was limited and it was time to start looking for a new garden to call my own.

Not all things go totally to plan - that is part 6 though, not for now

Talking of sagas - my favourite saga ever is: