July has spent a lot of time being scorching hot and quite dry until it decided to end cool and rainy.  This means the garden is confused and growing fast: I would say especially the weeds! 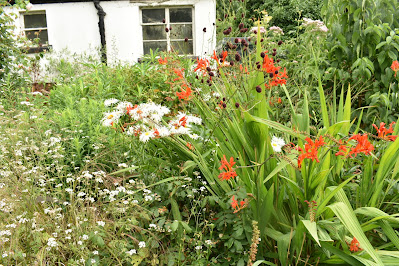 The garden is already looking late-summery, with the Shasta daisies and the Crocosmia lucifer making their presence felt. 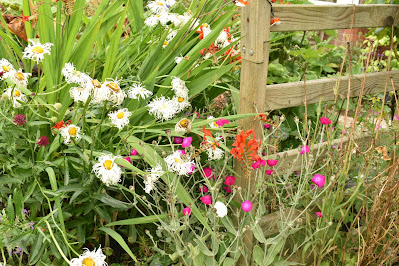 It is a combination I have in a few places in the garden and whilst the Crocosmia can get a bit out of hand, it generally plays nicely.  I like the self-sown pink lychnis that has grown through it here, I feel that it shouldn't work, but I think it does. 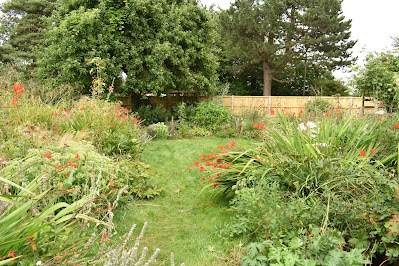 As the garden has developed over the years I have tried to get more repetition to create rhythm,.  I also try and create distinct differences in the borders so that some plants will not appear in all the borders.  I tell myself this is to create different characters but with a thread of cohesion (or do I mean crocosmia?). 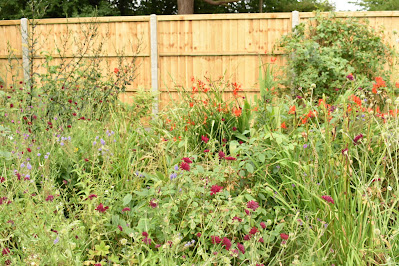 This part of the Conservatory Border is currently showing a lot of Kanutia macedonia but there are also some asters getting ready to flower.  You will note the sparkly new fence which my neighbours have just installed.  It will weather fairly quickly and is a little taller than its predecessor.  This gives me a bit more privacy and also a nice new blank canvas to plant up.  You cannot see them yet, but the two clematis I bought at Tatton Flower Show have been been wired to the fence. 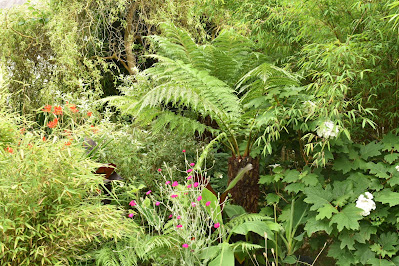 The Exotic Border, where the three tree ferns are making quite an impact is lush and green.  The various bananas are not planted into the ground as they are all quite small and I want to overwinter them indoors for at least one more winter before I plant them (apart from the Ensete which cannot bear frost, that will always be potted).  Many years ago my friend Michelle and I went to an exotic border day at Great Dixter and I remember Fergus talking about how green in colour their exotic planting was that year.  It made quite an impact on me and whilst this border has struggled for years, I feel that the tree ferns have give it focus and suddenly I am happy with it. 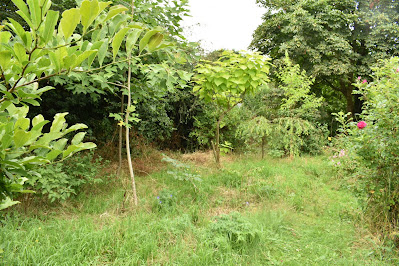 The grass in the Wild Garden had a bit of a cut back a couple of weeks ago; but now I am letting the grass grow longer again in this area.  I look at the trees I have planted in this area and whilst they are all still quite young, some are getting rather tall. 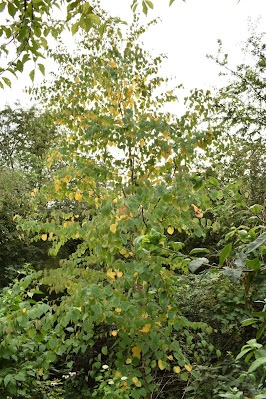 The Cercidiphyllum japonicum is now really quite tall and remains one of my very favourite purchases.  It tends to call Autumn fairly early and I can see it is turning already.  The hot dry weather has probably stressed it.  It is not releasing its toffee-apple scent yet, but it will. 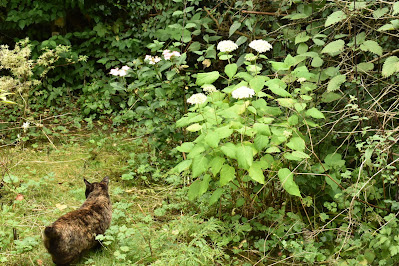 The Accidental Shrubbery is entering its hydrangea moment.  I have to keep an eye on if they need watering or not, but despite the heat they have not needed a lot of attention this year; this shows they are settling in and putting down roots.  Wave hello to Esme, she was following me around the garden. 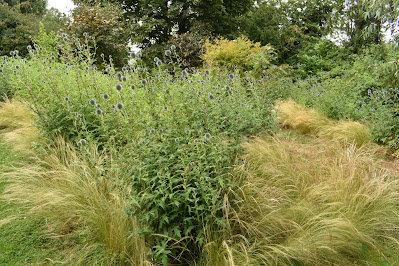 The Prairie Borders are starting to reach their peak.  The Echinops need thinning a bit and I never should have planted the perennial sunflower in these borders.  They have caused havoc that I will need to undo.  I have been despairing a bit of these borders this year.  The two large ones are looking ok, but have struggled with weeds and that flipping sunflower, but the smaller one that lies between the two large ones has turned into a disaster. 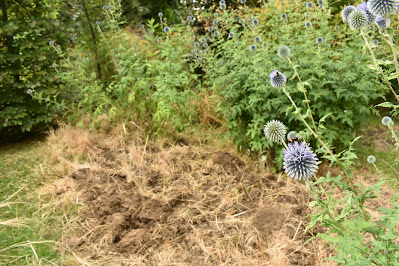 So I have weeded it and dug it over to start again.  It looks an even worse mess now, but I am letting the dead grasses add as a soil improver.  They will make this border better when I replant it I tell myself.  I need to focus on making sure all the weeds are gone first.  This was only the first dig, it will need a bit more. 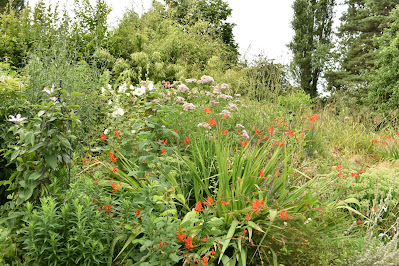 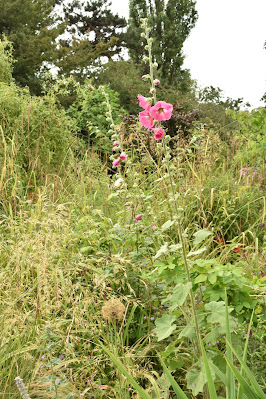 I do love hollyhocks. 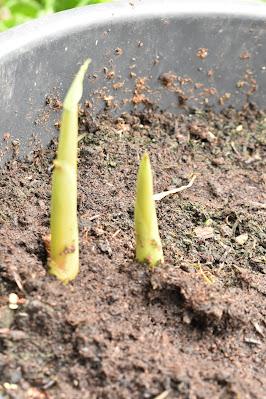 The Hedychium tubers I bought from the Midsummer Garden Life Festival a few weeks ago are sprouting. 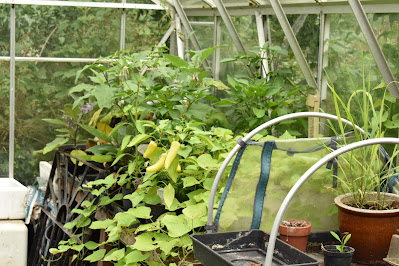 The Sweet Potatoes are taking over the greenhouse and the chillies and aubergines are growing well. 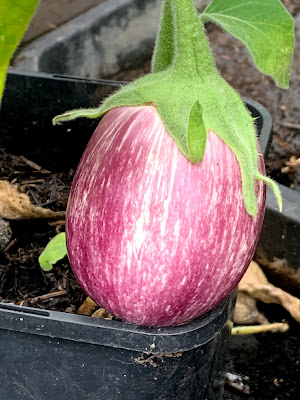 This is my favourite, it is so pretty.  I never think that aubergines taste of much so pretty is good enough for me. 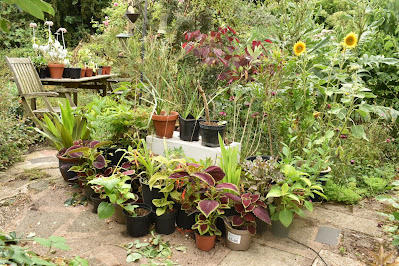 and I am very pleased with the coleus I have grown from seed this year.  They have really done well. 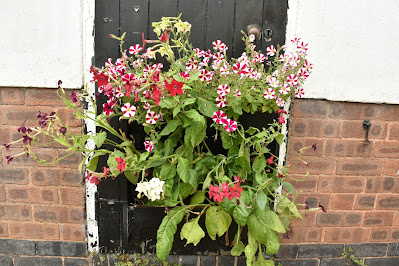 and the vertical wallplanter I was sent to trial from PlantBox continues to look wonderful with its petunias and nicotiana. 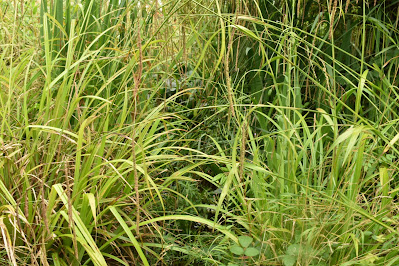 I end as ever on the pond..... no really, this is the pond.  The flipping Carex pendula is hiding it and it is low in level too.  I know, I know, it will get sorted.....
Stay safe all and be kind.
For more from the Blackberry Garden follow me on Twitter and Facebook
Ceridiphyllum japonicum End of month review End of month view Eupatorium maculatum hollyhocks Joe Pye Weed Prairie borders