Regularly readers may recall the year of the Accidental Watermelon where I bought some cheap seeds to grow Peperomia argyreia, the watermelon peperomia.   What I actually received were watermelon seeds that I knew immediately were not what I expected.  I grew them anyway and learned the valuable lesson of buyer-beware. 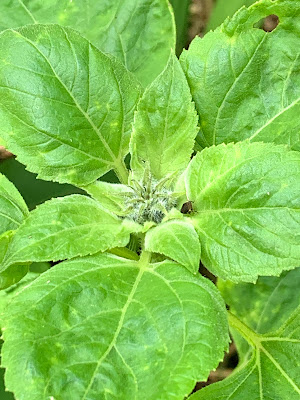 Fast forward to this year and my friend Graham Rice and I were having a conversation about a website he had found that sold pink sunflower seeds. The photos were quite amazing and the thought of a such a sunflower was very tempting.  If you google for pink sunflowers you will find some very exciting looking plants.   The seeds we were looking at were expensive and we agreed it was not worth the risk of them not being as pink as depicted.
So I wandered around the internet a bit more and found some pink sunflower seeds for a much lower price.  I read the reviews of the seeds which said overwhelmingly that they were yellow sunflowers.  Ordinary, pretty and definitely yellow.  I smiled to myself and pressed buy.
Some weeks later after I forgotten all about our conversation and my impulse buy, the seeds arrived.  It took me a while to remember I had ordered them and I looked at them rather confused at first.  Then as I was thinking 'they're sunflower seeds' I remembered and so I duly sowed them.  They germinated quickly and I gave a few seedlings to Graham so he could have some 'not pink' sunflowers too. 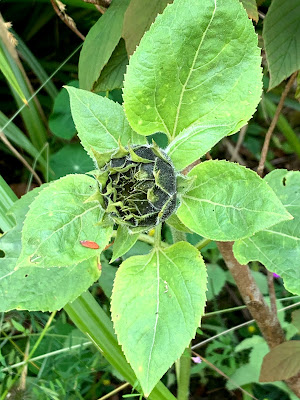 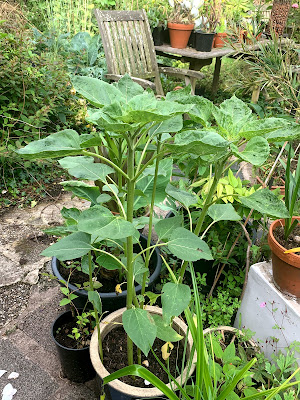 and some into a pot. 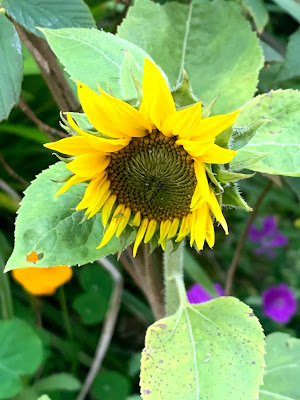 The day arrived that they started to open, firstly petal by petal: a bright, beautiful, shiny....... yellow. 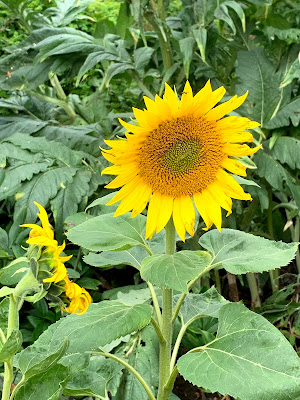 of course they are yellow!  I smile at them every time I look at them.  I had no expectations they would be pink so I don't even feel ripped off.  I had entered the purchase with my eyes open this time.
So there you have it, or more accurately I don't have it.  There are no pink sunflowers this year but I did have some fun growing these pretty yellow ones.  Next year when choosing sunflowers I will buy some from a reputable seller and enjoy the colour that they are on the packet.  I might choose some of those rather nice dark red ones ......
and if you want to read how Graham got on with his seedlings he has written about them here.
Stay safe all and be kind.
For more from the Blackberry Garden follow me on Twitter and Facebook
Accidental Watermelon annual sun flowers pink sunflowers sunflowers