The Genie is out of the bottle

Magnolias are known for making you wait a bit before flowering, so when you think they are going to flower for the first time and then have your hopes dashed it is a sad moment sprinkled with predictably.  Last year following my visit to the new RHS Garden Bridgewater I bought a couple of Magnolia Genie trees.  One for me and one for my daughter. 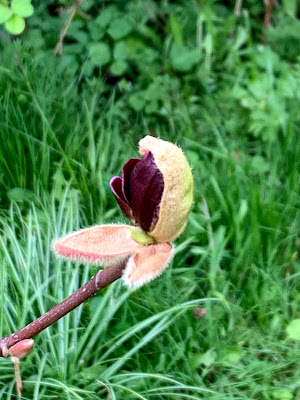 The tree lived in its pot for several months until I finally decided where to site it.  As the seasons turned into Spring I began to think that there were signs of flower buds on the young twig of a tree.  This was very exciting. 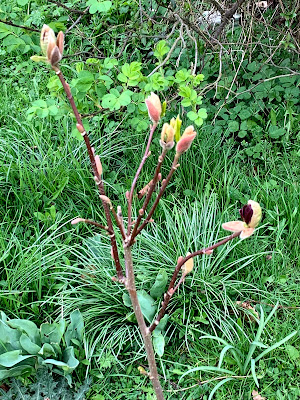 There were several flower buds and the month turned from February to March and then, if you recall, the frosts started to hit.  I decided I needed to take action if my precious Magnolia flowers were to survive. 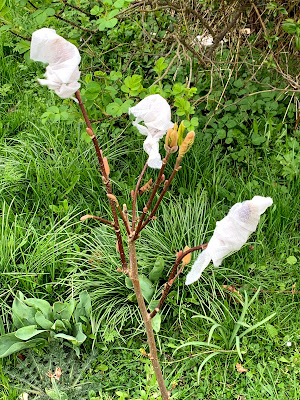 Little fleece hats were deployed.  I didn't tie them too tightly, but I wrapped them a few times to try and keep out the cold.
You may also recall that April was very dry, so I kept watering the tree just to make sure it would be ok. 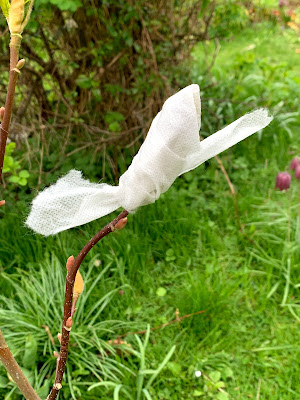 Dear reader, I think I can here you sniggering from here, and so you should.  When it felt like the frosts were finally over I gently unwrapped the Magnolia buds....
and they all, to a bud, dropped off into my hand.  I sighed, I maybe have sworn a little and then I told the little tree not to worry as clearly this year was not meant to be for it to flower.
but then... 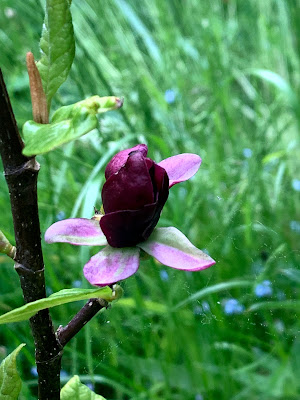 one day as I was checking on how my little tree was doing I realised I was looking at an opening flower bud.
I got terribly excited. 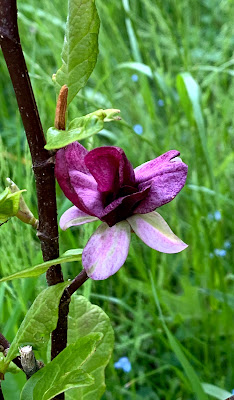 It is only the one flower, it does not quite look like the ones in the photos of what it is meant to look like but it is young and it got very cold and this is a second flowering that is often smaller than the first.  Most importantly I think it is perfect and to be totally celebrated and treasured.  It felt like a ray of hope that had made it against the odds.
Now I shall be very excited to see how my little tree does next year.  I might not bother with the fleecy hats again, but then again.....
Stay safe and be kind.
For more from the Blackberry Garden follow me on Twitter and Facebook
Magnolia Magnolia Genie RHS Bridgewater