The last day out

March 18, 2020
Some weeks ago I booked to go on a tour of RHS Bridgewater, the new RHS garden near Manchester.  I have visited previously back in October on a very rainy day.  I nearly did not book this tour but I thought I would like to see more of the gardens and hopefully not in the rain.  The world has turned and turned again since I made the booking and as I got into the car with my daughter I said to her that today might be the last day out for a while.  Sadly it would appear to be so. 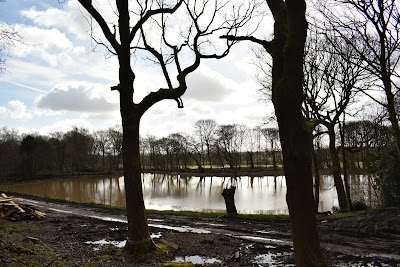 The sun shone, the journey was good and we arrived in good time.  There was a small group being taken around in the tour and we all kept good distance from each other and spent virtually all the time outside. 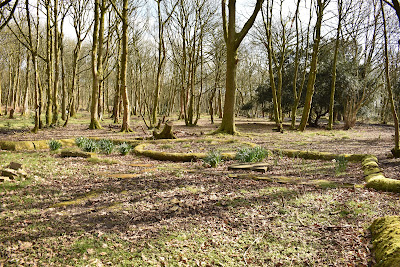 We saw a lot more than my first visit.  We were taken to the Scout's outside chapel, made from stones that had once been the edging to one of the grand fountains of the gardens.  Somehow the scouts moved the stones down to this new location. 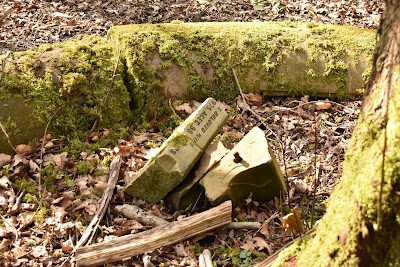 I worried a little about the broken gravestone.....

What I like about RHS Bridgewater is that it is not a great fancy garden any more.  It was great, it was hugely fancy, but years of neglect have created a new space.  Our tour guide said at various points in the tour that they were not going to restore the gardens to their golden age, but that things such as the Scout Chapel would remain.  This feels totally right to me.  History does not begin at one point and end at another.  The sense of place is the culmination of all the experiences this area has had.  The Scouting years are a key part of that story. 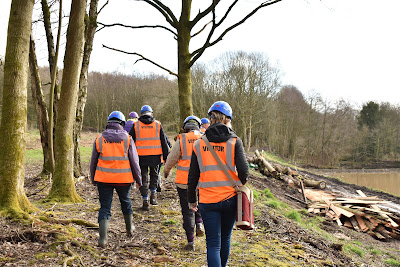 The gardens are still very much work in progress, so to go on one of the tours requires hi viz and hard hats.  We made a stylish and highly visible group. 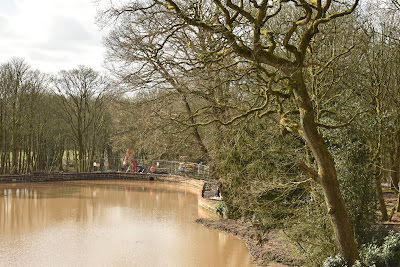 We walked to see the old lake, which has a fine new wall keeping the water in.  They decided to let the lake fill naturally expecting it to take several months; I think it is no surprise to anyone that it took a couple of weeks with the weather we have had this winter.  You can see the round overflow point that allows the water to spill down into the new Chinese Streamside garden.  More of this later. 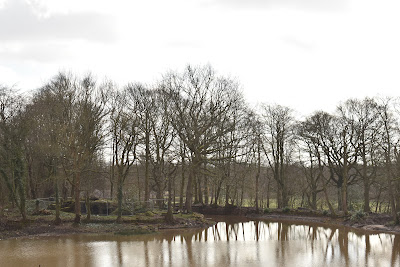 The lake is only a fraction of its original size as it dried up sufficiently for trees to self-sow into it.  This corner shows the island which has two grotto type structures on it.  This will not be open to the public for the foreseeable as it will be costly to make good and safe.  The focus has to be on the doable at the moment. 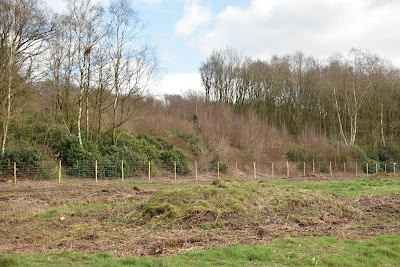 We walked up a little further and this rough piece of land, which has remnants of things that have now gone, including the fountain stones that have moved down to be the Scout Chapel.  The wooded terrace was once the fine-lawned terrace that led to the formal ornamental gardens which is where we currently stood.  All the trees are self-sown.  This shows what a major task it would be to restore it to its glory days, so the decision to not completely restore is indeed a wise one. 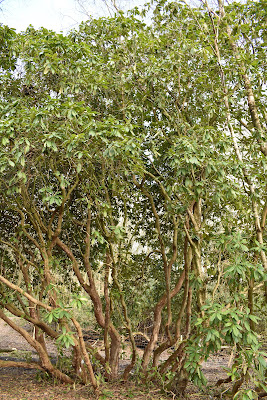 We moved on.  This is Rhododendron Cynthia, a survivor of the original garden.  I love how massive and structural rhododendrons can become. 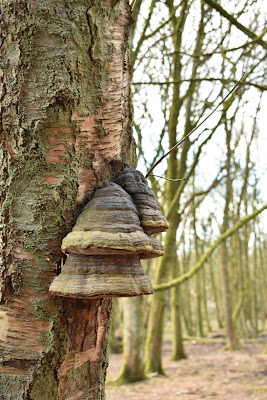 Apparently this is Elephant's foot fungus?  We stood and looked at it and understood where it got its name from. 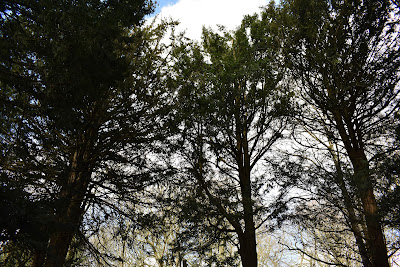 We moved on to this circle of  tall yew trees.  Apparently back in the day this was a low hedge that surrounded a rose garden.  The roses are long gone. 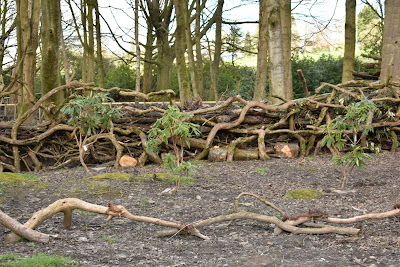 We then moved on to admire the new plantings of rhododendrons.  I loved the fence made of rhododendron trunks.  They had to remove many self-seeded ones from the area to open up the woodland.  Beautiful as they are, some can be quite a menace if left to their own devices. 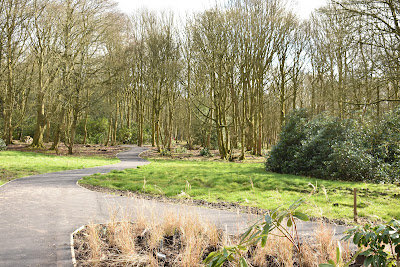 There are many good pathways through the garden.  It is being carefully designed to be very accessible. 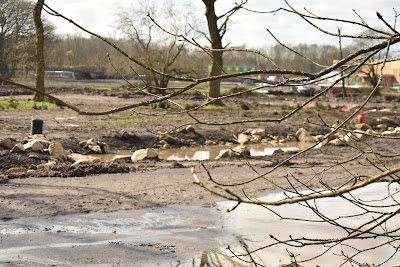 Onwards, onwards, this is the location for the Chinese Streamside garden.  The stream is not the river closest to the front of the picture, that is just the waterlogged pathway caused by the heavy machinery vital for making the gardens.  The stream will be inbetween the stones. 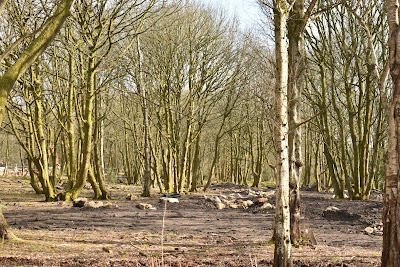 These lead up through the woods to the lake we stood by earlier.  The overflow from the lake will feed the stream but it is being artificially managed otherwise the upper lake would just empty. 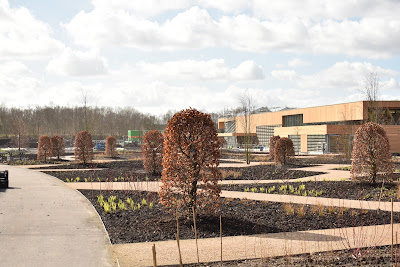 and then we were approaching the visitor centre, the actual real entrance to the garden. 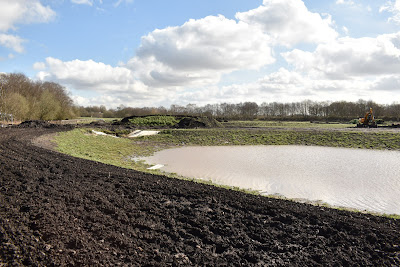 There is a new lake being created at the entrance.  I confess I got a bit obsessed with the colour of the soil.  It is so black, so different from the red clay where I live. 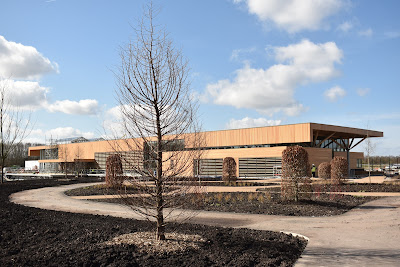 The lake will go up to the new entrance, there will be a cafe, gift shop and of course, plant sales.  All of my favourite things. 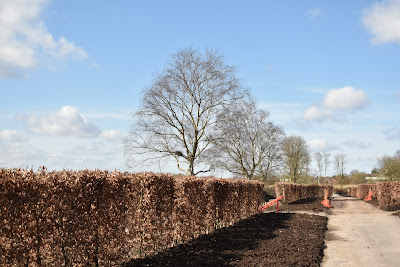 We then made our way into the Walled Gardens,  you may remember from my previous visit there are 11 acres (11 acres!!!!) of them.  They are lined by the instant beech hedging.  This hedging makes a great effect and of course will grow and develop through time. 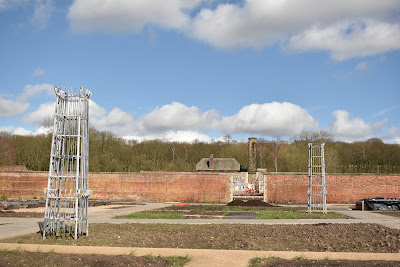 The sky remained blue and made a great back drop for the towers that reflect the shape of the boiler house chimney. 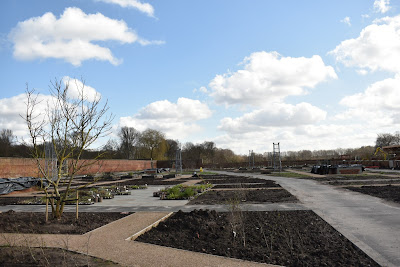 Planting has commenced in the Walled Garden in that dark (so dark) soil. 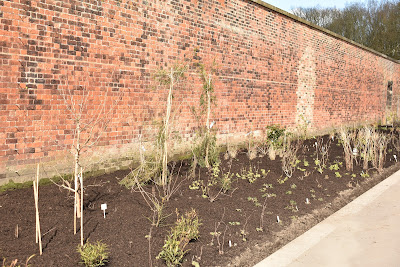 You cannot see from this photograph, but the walls have all been wired up ready for climbers and roses and espaliered fruit trees. 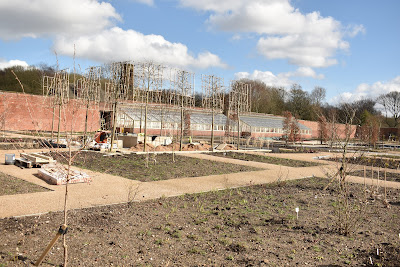 They have also rebuilt the glasshouses that now form part of the far wall.  This is the wall that was heated by the boiler house. 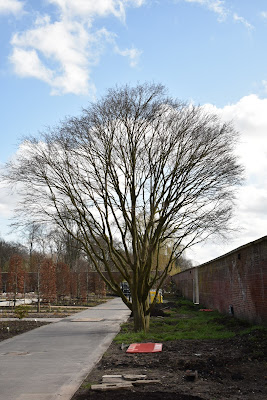 This huge Acer palmatum is left over from the Walled Garden's time as a garden centre.  It grew to large to be sold and is now a part of the garden going forward.  Another moment where the history of the garden is writ large upon it. 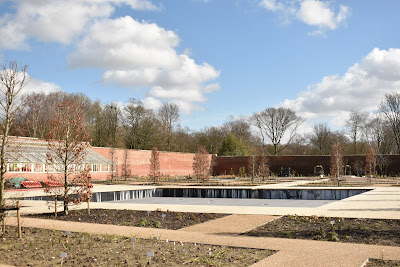 There is a huge reflective pond in the centre of this part of the Walled Garden, fed by a series of rills.  I love a good rill. 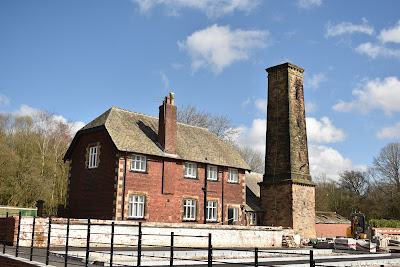 and the boiler house and bothy stand guard over the Walled Gardens.  Stamping their authority on how they should be maintained. 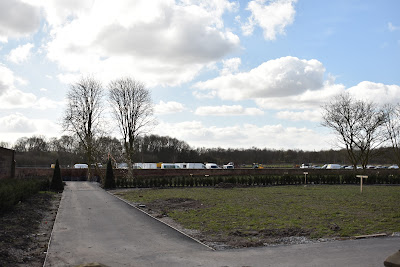 The Walled Garden complex includes a large orchard that will become part picnic area when the gardens open.

We arrived home happy after a lovely day out to the news that social distancing was being imposed.  Social gatherings should be avoided and no non-essential travel.  A day or so later and all the RHS shows up until the end of June were cancelled.  So many things are not going ahead and so many livelihoods that depend on them are endangered.  We are living in extraordinary times.  It will have been, as I had feared, the last day out for quite a while.  At least there was a memory of a sunny day to keep us smiling into the unknown.  Let us hope that the July opening date will be possible.  I will be returning to see it once opened.