A rainy afternoon at RHS Bridgewater

October 27, 2019
and when I say rainy, I mean torrential for a lot of the time so please excuse the photo quality as they are through the veil of rain.  I seriously considered not going as the forecast was a yellow weather warning for rain.  I decided though that this was my chance to go and visit RHS Bridgewater before it opens to the public next year, so rain mac and walking boots were deployed and I drove north. 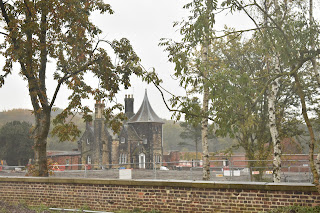 The RHS have been allowing the public to tour the gardens as they are being developed over the last few months.  I have been very interested in the new garden since it was first announced in 2015 and when I saw an advertisement for the tours and knew I wanted to go.  It is very much a working building-site so we had to wear hi-viz and hard hats whilst on site.  I can confirm that hard hats are good at keeping the rain off. 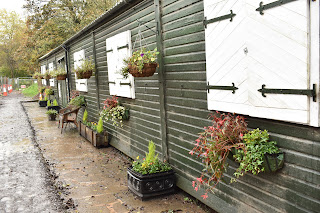 The tour base is decorated with hanging baskets and planters.  The site is already being used by a group for planting for wellbeing and these are some of their work. 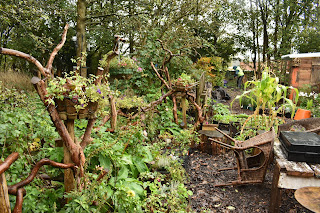 They have a small area they have 'reclaimed' at the back of the Scout Hut, which even in this rain looked great.  We were told that the grounds have been used for scouting for many years. 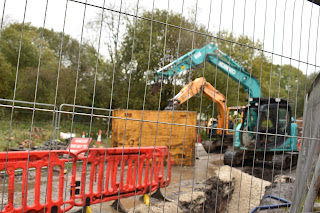 Our safety was looked after, which was necessary as machinery was all around us. 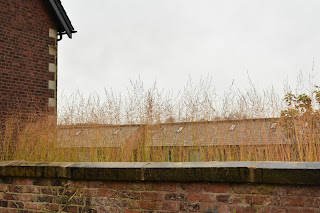 These grasses are part of the Tom Stuart Smith garden created for RHS Chelsea Flower Show this year.  They are just being kept in this space at the moment as they will be released into the garden-proper when it is ready for them. 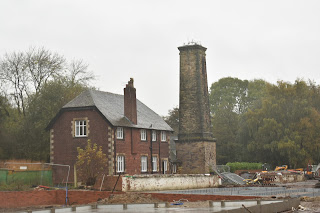 This is the very smart gardeners' bothy with the boiler and chimney close by so the gardeners can keep the boiler running.  It is quite an impressive chimney and bothy.  Both show the size of operation that was being run here when the garden was in its heyday.

RHS Bridgewater is built on the site of Worsley New Hall.  It was built for the first Earl of Ellesmere, Frances Egerton and was completed in 1846.  It has a fairly familiar sad story of the toll of two world wars eventually leading to it being demolished by the end of 1949.  Two layers of the basements are still in existence, as is an anti-aircraft operations bunker which if you look on youtube you can find film of the inside. There are also many of the outbuildings in varying degrees of repair such as the bothy referred to above, and the Gardener's Cottage (above).  There is much repurposing and renovating to be done. The eleven acre walled garden remains and for many years was used as a garden centre.  It is currently the focus of a lot of the work of phase 1 of the project.  The restoration of these gardens will take at least ten years so the project is being split into phases. 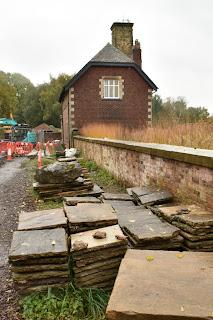 As you walk around the side there are currently piles of 'finds' kept carefully to one side.  They are intending reusing as much as possible. 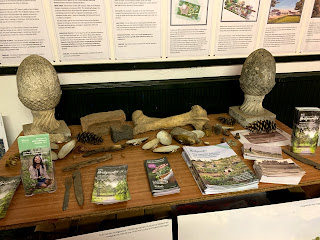 They have also found other 'finds' that will go on display when the exhibition rooms are ready. 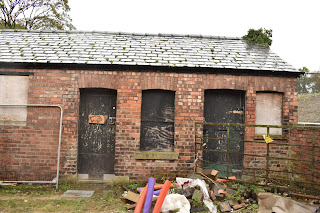 These are the old stables used for the working horses for the gardens.  They currently hold the pig food as they have six pigs who are currently being used to clear areas of the site.  They have successfully cleared what will be the orchard and now are being used further up in the site.  Sadly we did not get to see them as it was not possible to get to that area. 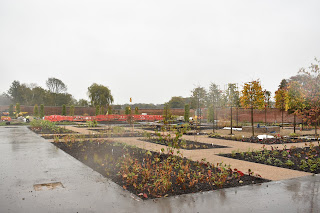 We were allowed to stand in the doorway of this part of the walled gardens.  The Mediterranean Garden is the far side and the near side is the Paradise Garden.  You can see it was, by this point in the tour, raining even harder. 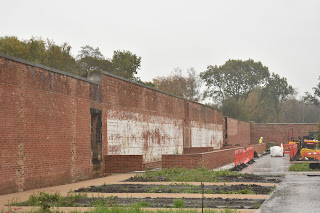 The white patches on the wall indicate where the glasshouses were and will be again soon. 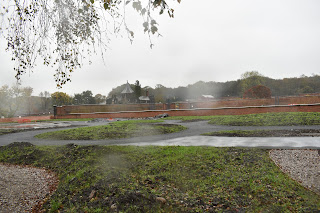 We then walked around to the other side to the Wellbeing Garden, 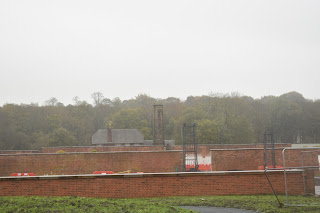 I loved this view across the Walled Garden.  You can see that there are metal structures that mimic the boiler chimney.  These will be planted up and I think they will be a great feature. 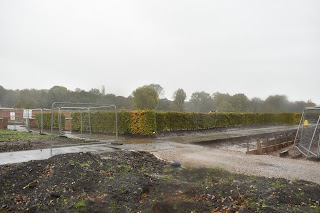 and this rather impressive hedging.  The hedging has only been there a brief time, but it was grown in sections and carefully planted out in the same sections so it all fits together very neatly. 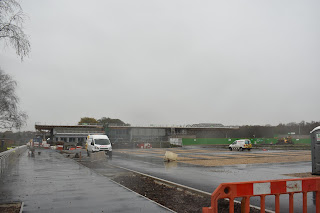 The Welcome Centre is progressing well.  It really looks impressive already and I am looking forward to seeing it finished. 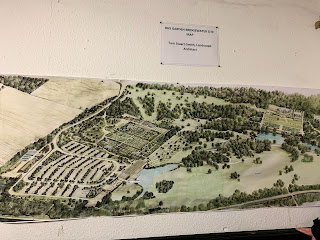 This is the plant of the gardens as originally designed by Tom Stuart Smith. We only really went around the area of the Walled Garden and you can see that is a fraction of the 154 acre site.  This is a huge and impressive project.  It is estimated that the gardens will bring £13m to the area; they are already providing employment for over 100 contractors on site and there are many volunteers who are also giving their time to make this project happen.

I have to thank our tour guide Lesley who seemed totally unphased by the torrential rain.   Over 3000 members of the general public have been on tours already and even though it was the rainiest of rainy days I was very glad I managed to go.  I for one cannot wait for them to be open and I hope to get there as soon as I can when they do.
rainy days RHS Bridgewater Worsley New Hall