A simple act of kindness

I wrote recently about the death of my beloved cat Trev.  It was a shock when it happened and it took me a few days before I could tell people what had happened.   I told close family but I had to wait until I felt strong enough before I could write about it publicly.  The reaction I received was such overwhelming kindness that I cannot begin to tell you how much it was appreciated. 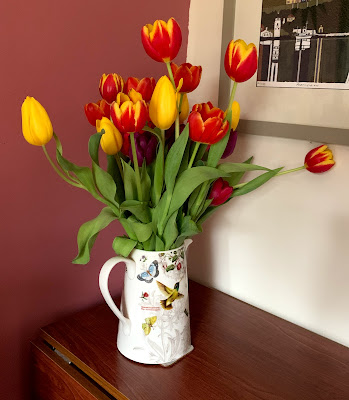 A few days passed and the postie knocked on the door and delivered a heavy box of flowers to me.  I say heavy because, well, they felt surprisingly heavy.  I unpacked them to find a card from a kind friend I know from Twitter who had sent them to me to make me smile.  They did make me smile and quite teary, I know some of you will recognise this feeling. 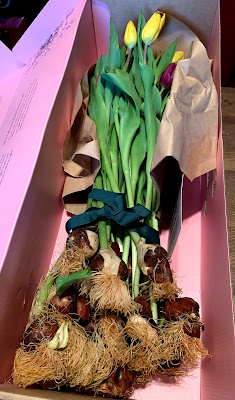 The reason why the box was heavy soon became obvious.  It was a goodly bunch of tulips and the weight was because they still had their bulbs attached.  I admit I blinked at first at this wondering what to do.  Unusually for me, I hunted for the instructions to see what they said.  I am usually 'just get started and then read the instructions when I get stuck and its all going wrong' sort of person.  The instructions were great as they gave me options.  I could pop them into the vase intact and then later plant them out, or I could snip the bulbs off, place the tulips in a vase and plant the bulbs out straight away. 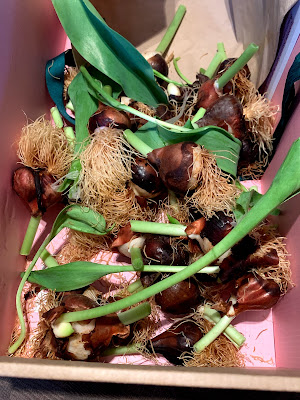 I thought for a millisecond and snipped the bulbs off.  I knew exactly what I was going to do.  I arranged the tulips in a pretty vase using my favourite technique of plonkibana - the ancient art of plonking flowers in a vase.  I then went outside and looked for a suitable container. 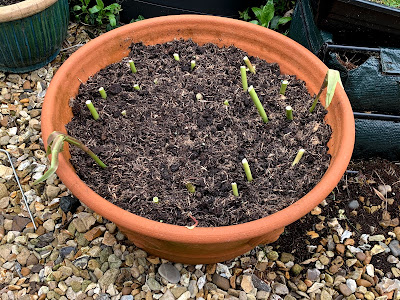 The half-dalek pot was waving at me and I knew it was the one.  Within moments it was filled with fresh compost and the tulips bulbs arranged carefully (also plonked) within it.  I deliberately left the stems quite long so they could poke out of the compost and get some energy ready for next year.  Will they flower again next year?  Who knows? but I will enjoy waiting to find out and it is a living memory of a kind act.  For those of you who are interested: the flowers were bought from Bloom & Wild, a company I use frequently to buy flowers from to send to family and friends.  Isn't it a great idea to leave the bulbs on? 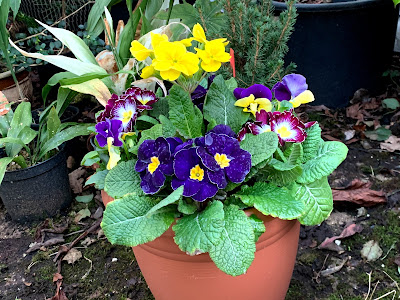 A few days pass and I had reason to go into work, something I had not physically done since January 4th.  To go into the office I have to have to have regular negative Covid Tests beforehand so making sure I was complying was the first order of the day.  This is something I need to get used to as I start to go to the office more often.  A good friend, who is also a colleague, was going to be in the building as well for a different reason and we agreed we would socially distantly say hello.  As we stood by her car she says to me 'I have something for you, for Trevor'.  She reached into the boot of her car and pulled out this glorious pot of primroses and pansies.

She doesn't know I teared up again from this kind act as I walked over to my car.  I put this pot so I can see it from the Conservatory which is where I work when I am working from home.  I can turn and see it and smile.  A smile for  good friends, kindness and Trev.

We all need more kindness at the moment.