The Veg Diaries - fresh potatoes for Christmas and the New Year

It is cold out there at the moment and whilst Leicester is so far snow free, some parts of the country not that far away have had their first snowfall.  Whilst all may appear quiet in the garden there is something veg-wise I want to update you on. 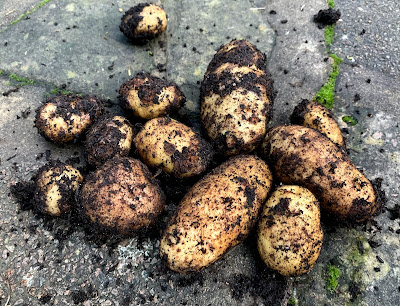 You may recall way back in June I wrote about being sent some seed potatoes to plant and hopefully have fresh potatoes for Christmas.  The potatoes were sent to me by The Potato House and, full disclosure, I did not pay for the potatoes but my words and opinions are my own.
I planted up the seed potatoes in June, they had been especially held back to prevent growth until later in the season.  I have known friends who have grown potatoes for Christmas and, (I feel I should almost whisper this), always thought it must be a faff and not something I was thinking of doing.  It has turned out to be not a faff at all.  Admittedly not being able to do much in the garden for the last seven or so weeks has meant everything has had to look after itself; but before then I earthed up the potatoes a couple of times but generally left them to themselves.  As with most of my veg this year they were grown in containers and potatoes seem to not mind this at all. 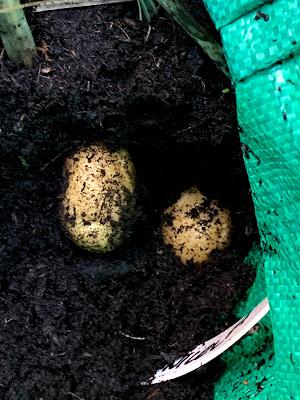 I did do a test furtle a few days before Christmas.  I posted a photo on Twitter and a friend called them 'earth eggs'; I really liked this as an idea; it turns out it is an Animal Crossing reference (she says as if she knows what this is.....).
There are two bonuses from growing them in containers:  firstly they are placed not far from the back door which means that even the lazy such as I am can nip out and furtle a handful when needed.  Secondly: when the container is empty you can just compost the old compost and if there are any tiny potatoes left in there you can remove them quite easily.  When I grew potatoes in the veg borders no matter how careful I thought I had been there were always some popping up through the next year's veg.
Anyhoo: the varieties grown for Christmas consumption were: Maris Peer, Coleen, Sarpo Kifli and Record.  The variety that produced the most tubers has been the Sarpo Kifli and the Record potatoes are a close second.  I still have some left ready to be furtled when needed.
and the taste?  The taste was superb.  I always steam new potatoes and these had the most wonderful flavour.
I am now converted to growing fresh potatoes for Christmas - well, actually, a potato is not just for Christmas and I am looking forward to getting through the first couple of weeks of the year with fresh tasty potatoes.  What could be better through the dark cold weeks ahead?  Oh I know - planning next year's potato crop: I need to be thinking about which ones to buy for the new growing season...... 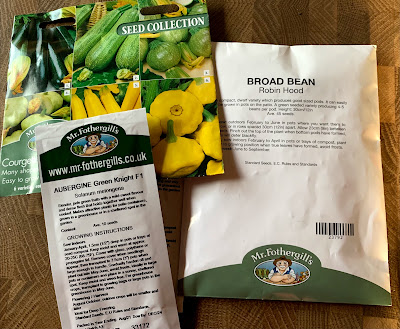 In the meantime the first seeds I have bought for the new growing year have arrived.  I have decided to grow broad beans again after a couple of years rest.  I like broad beans and I am still not going to grow them every year I am sure, but it felt like a good year to dust them down and get cooking with them again.  I am also going to try different aubergines this year, hence the 'Green Knight' seeds.  They look a bit like hattifatteners......
What veg are you thinking of growing in the new season?  Are you going to try anything new?
Stay safe all and be kind - there are hard weeks ahead so take care.
fresh potatoes for Christmas Record Sarpo Kifli The Potato House