June 28, 2020
June has been a bit of a month in the veg garden.  Things have been progressing fast and it is now getting very exciting. 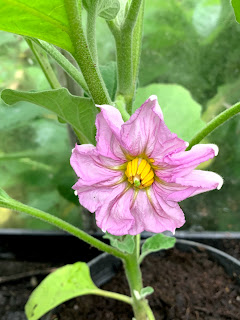 This is an aubergine flower.  I have grown aubergines for a couple of years now in the greenhouse and last year was the first time I had any real success with them.  I use plug plants as I find it more reliable than seeds usually.  But, as we all know, this year as not been usual.  I ordered my aubergine plants from Thompson and Morgan in January.  I ordered a grafted plant 'Bonica hybrid'  I get a discount as I am member of their plant trials panel.  Sadly, like many plant deliveries, they got stuck in the post and.... 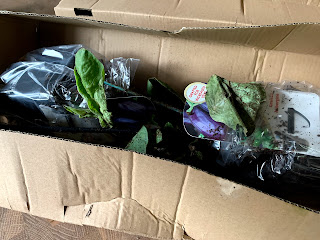 the pack of three arrived with two looking near death.  I emailed the customer service desk, sent them photos of the delivery and a few days later some replacements arrived.  This made me very happy.  The replacements are 'Black Beauty' as they had run out of the original plant. 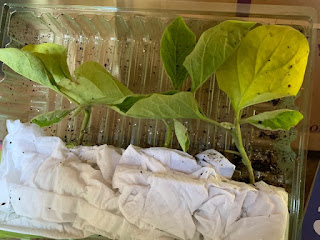 I potted on the replacements and a few weeks later here we are with flowers appearing and.... 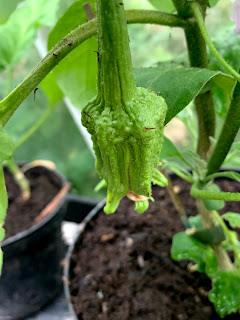 Bonica is a wonderful plant and flowering well.  This could well be the first aubergine of the year.  She is the first grafted vegetable plant I have tried and so far so very good. 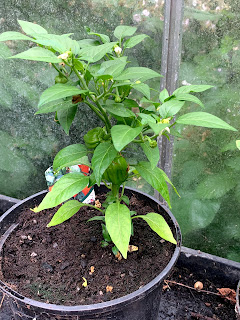 The chillies are also doing well in the greenhouse.  Nice fruits are appearing and I recently potted them on again.  These are also from the Thompson and Morgan trial and are called Cheyenne. 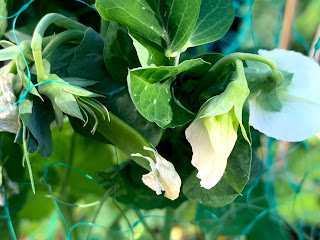 Outside into the container veg patch and peas are forming.  I love love love growing peas.  I know the harvest period is fairly brief but every fresh pea is a wonderful pea.  I have done some successional sowing to extend the season and I am looking forward to the first crop. 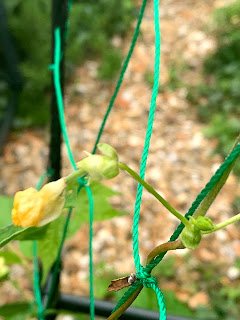 There is also the first runner beanlet and... 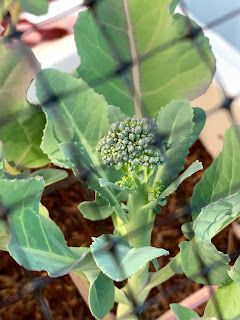 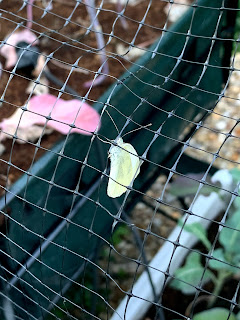 My cabbage netting might not be as effective as I had hoped...... 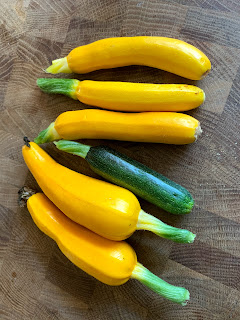 I have had my first harvest of courgettes, I was so pleased to get a nice crop forming.  I bought these courgettes as plants from Thompson and Morgan as part of the trial - these are the 'Colour collection' but I cannot see it as available on the website any more.  I tend to pick them fairly small if I can, though I find towards the end of the season some always escape notice and become marrows.... 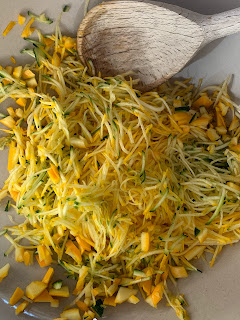 I made courgette and cheese loaf with them, I thought they looked so pretty when I was prepping them I had to take a photo. 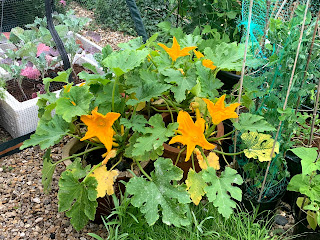 The courgettes responded to the first picking by bursting into flower the next day. 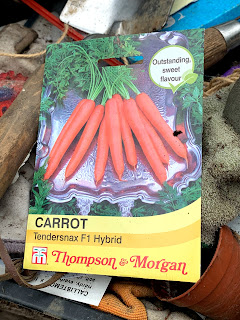 I have succession-sowed some more carrots.  I received these seeds 'free' with the planters I bought from Thompson and Morgan a few weeks ago. 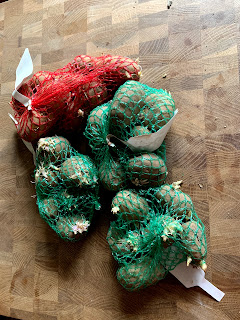 and, a first for me, I have planted some potatoes for Christmas.  Now is the time to be thinking about planting them if you want new potatoes in winter.  I was sent these tubers from The Potato House, I have not paid for them but my words and opinions are as ever my own.  I have four varieties, six tubers of each:  Maris Peer, Coleen, Sarpo Kifli and Record. 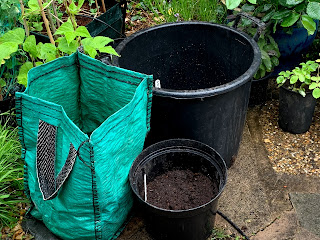 I have planted them into containers and placed them into the container veg garden.  You can see they are a variety of different types and sizes.  I only had one potato bag left and I briefly thought I would buy some more but then I thought again and applied my principle of using what I have already have.  I looked at what size potato growing containers are and some were smaller than others.  So I used pots I already had in the greenhouse and I will see how they grow in the different sizes. 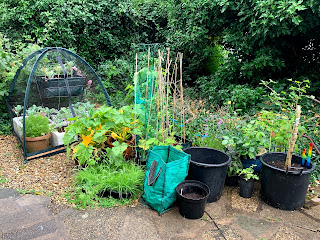 This piece of the garden has never been well used before, it is just outside the kitchen window and was a walking through/washing line place.  Now it has become a serious growing space it brings me great happiness.  Why I didn't start doing this years ago I do not know, well probably it was because I was developing the main garden.  I have never enjoyed growing vegetables as much as I have this year.  This is definitely a habit that will stay.
Stay safe all.
container vegetable growing The Potato House Thompson and Morgan vegetable gardening Vegetable Growing