A slight covering of snow

Only the other day I wrote about The Uncovering and now it is it has been covered, briefly, with snow.  We have had our first Winter covering of snow for the year.  Well, I say covering, it is not quite a complete edge to edge white out - but it is as close as we have got so far. 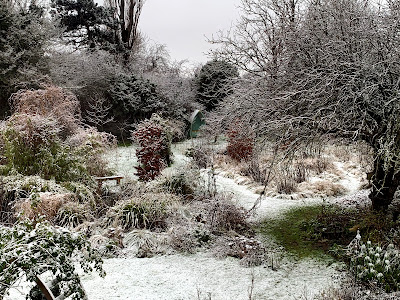 It was an unexpected snowfall as it was not forecast.  I feel a complex blend of outrage at this in a 'how dare the forecast be wrong' kind of way whilst also being rather pleased that there has been surprise snow.  In that smug 'aren't I clever' moment I also note that it started snowing on my daughter's birthday.  I have a small smug moment as I always think it snows at this time of year in the two week zone between my daughter and my son's birthdays.  This is largely stapled into my memory as most birthday parties for them when they were younger seem to have had an element of 'will we have to cancel if it snows too much'.  As I write this the notion of any birthday party is of course impossible due to Covid restrictions and worrying about snow cancellations seems so last decade now.

I know I have to rush outdoors quickly to take some photographs before the snow begins to thaw, as snow rarely lasts long here despite the day feeling bitterly cold. 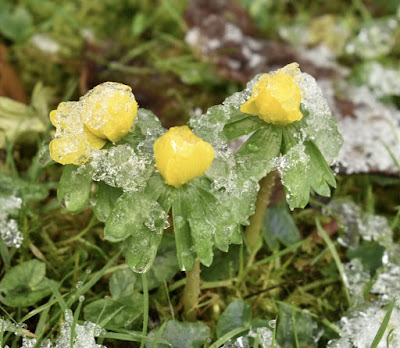 It is against the law not to take photos of flowers shivering in the snow and ice. 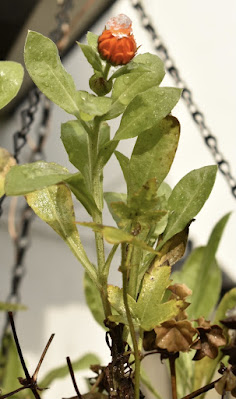 This hardy Pot Marigold in the hanging basket is proving its hardy description.  I think it is declaring itself hard as nails in a voice that to the untrained ear sounds exactly like Jason Statham.  I may never look at marigolds in quite the same way again, who knew they used so many expletives!! 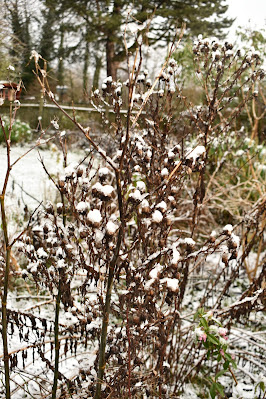 I always love how snow perches so delicately on the long dead flower heads that I leave over the winter as structure and places for wildlife to shelter. 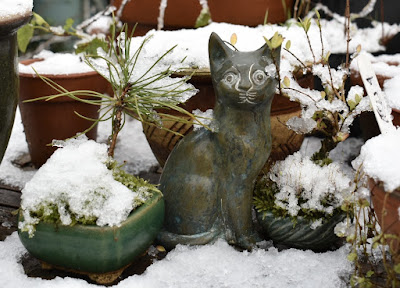 The snow thawed with more snow forecast as I write.  Whether it actually arrives is one thing and will it settle again and stay longer is equally hard to know.  Snow here has a fleeting beauty and in these Covid days is not as disruptive for me as I have nowhere to travel to.  As it thaws it will add to the already high water table and floods that are close by.  This will make things worse for some areas that are already suffering from floods.  The alleged 'innocence' of snow is misplaced.
Here though, in my garden I can look and enjoy its fleeting beauty.  It feels like a real winter if we have snow and I can now tick this box as complete and to look ahead for the signs of Spring and growth returning.
Stay safe and be kind
garden gardening signs of spring snow snowy garden