It is the time of the year that I call 'The Uncovering'. 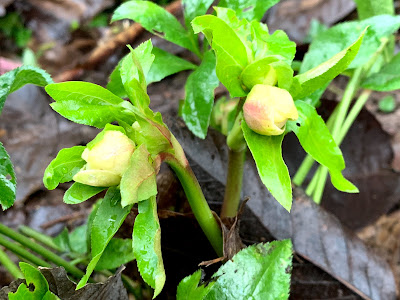 I have confessed previously that I am not a fanatical tidier in the garden (or in the house for that matter... ).  I am not quick to remove the leaves that fall on the borders as I like to think of the worms pulling them into the ground and generally improving the soil for me.  I have more leaves than the worms can cope with so after a suitable period of time I do start to clear them away.  Not every single leaf, but enough to let what is underneath breathe and get some light. 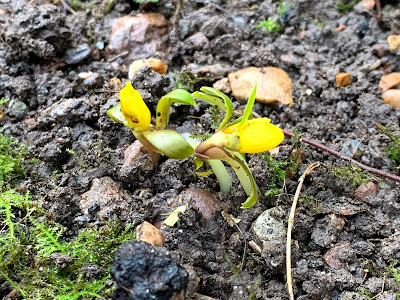 As I gently remove the leaves, I can see the bulbs and corms underneath blink into the sunlight. 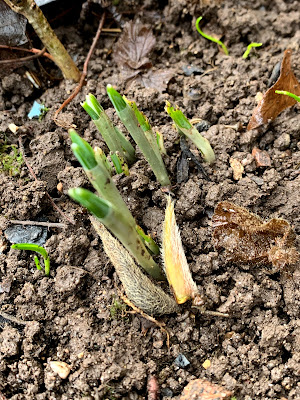 The magnolia tree in the front garden is one of the main reasons I bought this house, but its large leaves rot down slowly and blanket everything underneath them.  As I move the leaves away, like I am looking for hidden treasure, I find a fluffy covering from the magnolia buds that fall away as the buds start to stir into life.  I leave it there, a sign of the flowers waiting for their moment in late Spring. 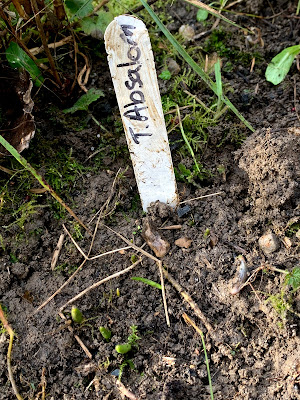 In the back garden I move along the borders, weeding and removing detritus that is covering the precious things.  This Tulip Absalon is one of my very precious things.  It was, relatively to what I will usually spend on a single bulb, quite expensive when I bought it.  It is incredibly beautiful and has the dual purpose of also reminding me of a good day out.  I thought I might have lost it last year so I am delighted to see signs of it returning for this year. 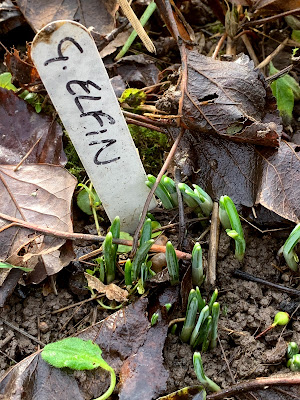 Overwhelmingly the snowdrops in my garden are Galanthus nivalis, the 'common' simple snowdrop.  I have occasionally bought a named, slightly more expensive snowdrop or two.  When I say expensive again this is all relative as I am not keen to spend money on a single bulb that might just disappear.  Let's just say G. Madelaine - where are you now??  Sigh.  These G. Elfin however are as you can see growing strongly and are starting to form a rather nice clump.  They also have the dual benefit that when I look at them and read the label I say to myself 'pity the Gelth'  (google it, you won't be surprised at where it comes from.) 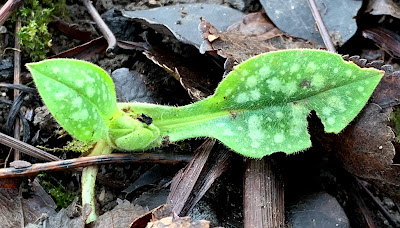 With each uncovering I smile and think how wonderful the plants will soon look newly released from their winter blanket.  I nod hello to the worms that still have some leaves to pull down into the soil.  I inwardly smile darkly and think how many slug eggs I have uncovered that will soon be feasted upon by the robin that is following me as I work. 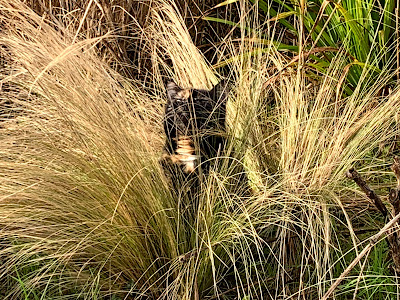 and Esme sniffs at the air to see if Spring is on its way.  Not yet, I say to her, not yet.......
Galanthus Elfin galanthus nivalis gardening tulip absalon winter gardening