June 21, 2020
It is almost three months to the day since I last had a day out.  I have been for walks and I have been going to the local Co-op which might have become the highlight of my week.  I did go on a walk that included a nursery visit and one small plant was purchased, but like so many of us I have not had a proper,  plant-buying splurge time away from the house. 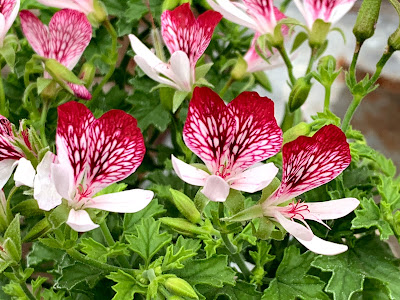 New to my weekly routine is a Tuesday late afternoon soiree my a good friend I work with.  Every Tuesday we log off from work, pour a glass of something alcoholic and then by video call put the world to rights.  This routine is a keeper.  We soon get to talking plants and online squiffy purchases have been made during these sessions.   On one of these chats my friend said how much she loved pelagoniums and needed some for pots in her gardens.  Fibrex, said I, you need to look at the Fibrex website, they are the ones.  One box of pelagoniums delivered to her house later and she agreed.  A week or so later and we are chatting on Twitter and she is saying how much she loves her pelagoniums and I said we should visit Fibrex when it becomes possible.  It is about 1 hour for both of us to get there.  It was agreed, this would happen.
When it was announced that nurseries could re-open we went to our diaries and decided a day we both could go.  To say I was looking forward to this is the understatement of understatements.
Except....
I found it hard getting out of the house.  I can faff at the best of times but I am generally a very punctual person.  This time I faffed as if preparing for the faffing olympics.  I kept thinking of things I needed to do before I get out of the house.  I checked my car a couple of times for tyre pressures etc because it has not had a long journey for three months.  I had to go and check the front door twice to make sure I had locked it.  I realised I was putting off actually going and that this is what lockdown has done to me.  I am usually a very confident driver, I love driving.  I used to drive an 80 mile round trip to work every day before the lockdown happened.  I have lost my confidence and this in itself shook me.  I finally got myself (and the car) in gear and set off. 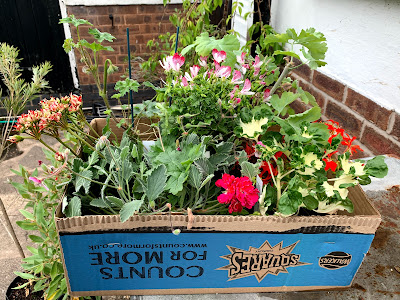 We had the best afternoon in, well, in three months certainly but actually longer.  We socially distanced, of course, but to actually spend time with a friend was just amazing.  It turns out that she is taller than I remembered.  I might have said I had not seen her standing up for three months, which apparently was an ill thought through comment as I thought she would laugh until she would cry.  I meant, I clarified, that video conferencing means you only see people sitting down (sigh).
Anyhoo - what did I buy, well... 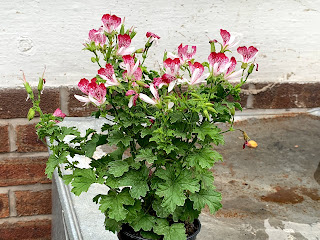 This is an Angel Pelagonium 'Eskay Saar.  I missed her on the first sweep of the greenhouse as I think we were talking too much, but there she was on the second sweep waving hello and jumping into the basket. 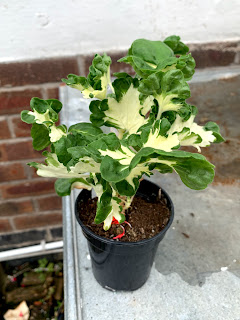 This is 'Freak of Nature', I have no idea what the flower will look like and I don't care, the foliage just bowled me over. 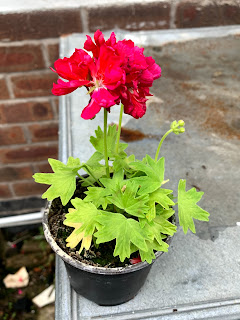 I must have dropped the label to this one, but she is a pretty little miniature. I love the pale lime leaves and the sweet double flowers. 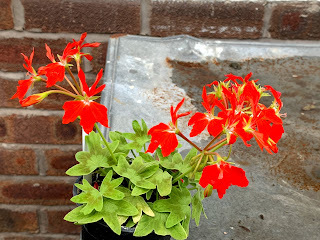 My friend does not like orange flowers, my friend is wrong.  This is Vectis Starbright and she is a doozy of an orange.  I could not refuse this plant. 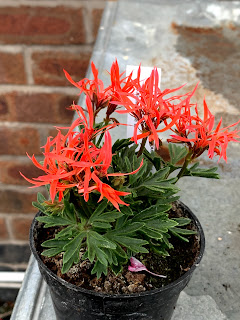 Still on orange, this is 'St Elmos Fire', so so pretty and a great film and earworm to boot!  Though it did make me want to go home and watch the Breakfast Club..... if there is a Pelagonium Breakfast Club I will buy it sight unseen! 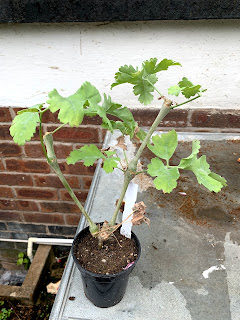 This pelagoniums foliage reminded me of gingko leaves.  It is P. Gibbosum.  I looked it up on google whilst in the nursery to see what the flowers are like.  They are small and yellow and have sweet scent in the evening to attract moths.  The description said it has swollen nodes. 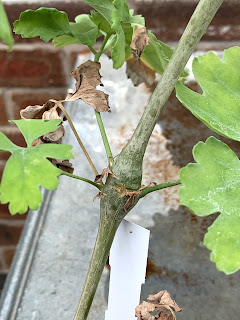 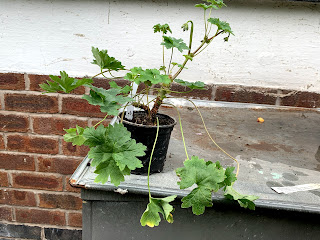 This is a zonartic pelagonium, Rushmoor Mississipi.  There were some in flower but I chose this one that was still in bud so that I would not knock the flowers off transporting her home.  She was my luxury buy, not that she was overly expensive on her own, but she was a bit more than the others cost individually. 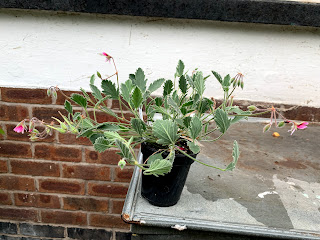 This is Renate Parsley, my favourite pelagonium.  This was the one pelagonium on the list that if nothing else I was going to buy. 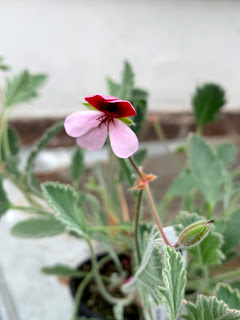 Something about the grey foliage and two tone flowers just makes my heart sing.  I failed to keep my last one alive over the winter so I am determined to do better this time.  If I could propagate her I would be over the moon.
She does, however, now have real competition.... 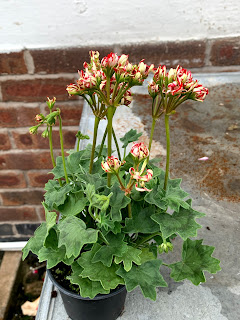 This is Britt Ekland.  Isn't she amazing? 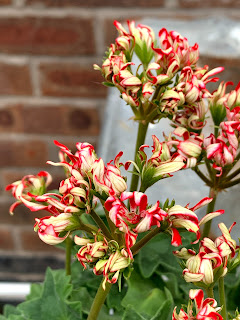 Look closer, I think she is truly wonderful.  Ok, I have to confess, her name is not Britt Ekland.  Her label had dropped out.  'She's Swedish' I was told, at which point I decided that she must be Britt Ekland as she is Swedish and very beautiful too.
Is that it? you ask, noooo, they sell other plants too.  Dear Reader, two shrubs jumped into the car.... 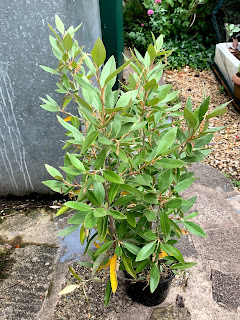 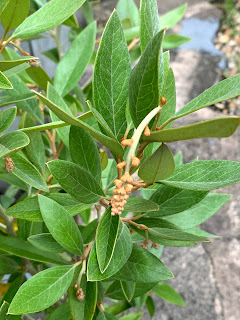 She is covered in buds and I cannot wait to see her flower. 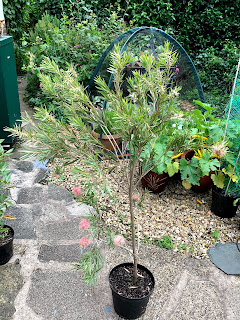 and finally, this is Callistemon Injune (Named after a town in Australia called Injune, not because she flowers in the month of June, except she does). 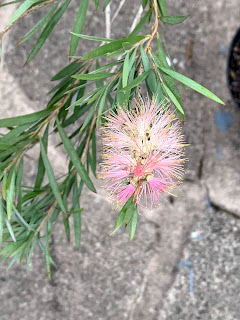 and what a pretty flower it is.  I realised as I bought her that she is my fourth callistemon and that I rarely if ever mention them.  I don't know why as I am incredibly fond of them.  I shall remedy this.
It was so good to visit Fibrex again.  It is a few years since I was last there and I was going to go to their Gardeners Gathering this weekend but of course they have had to cancel that.  I always go and say hello at garden shows and I know that supporting independent nurseries like them is so important at the moment.
I drove back far more confident than I drove there and determined I must go out more (staying safe) to prevent the anxiety from getting worse.  I drove home happy, I had some amazing plants, I had a wonderful catch up with my friend, we laughed so much and it was just a huge relief to be out and about again.  There will be more trips out, there will be a normality.
Stay safe all.
callistemon injune Fibrex Nurseries Grevillea Victoriea lockdown lockdown anxiety lockdown life pelagoniums species pelagoniums zonartic