January 19, 2020
Gardening is often about making decisions. Deciding what to plant, when to plant, what to remove, what to let be, do I do this today or tomorrow or ever?  Many gardening decisions are fairly benign, you think about what the desired outcome is and when you get to that point decide if you like it or not and if not, decide what to try next.  The most difficult thing for me is often the waiting for that outcome.

The garden grows at its own pace and nothing I can want or do will change that.  I have said before that one of my favourite quotes is "A garden is a grand teacher. It teaches patience and careful watchfulness; it teaches industry and thrift; above all it teaches entire trust." (Gertrude Jekyll 1843-1932).  It is very apt for me as the garden has taught me to wait, to see what happens and then work with what is rather than what might or should be.

Cyclamen are one of my favourite early Spring flowers and having them start to naturalise is a moment of sheer joy for me.  This patch at the top of the garden was started from three pots bought probably five or so years ago.  I planted them and whispered to the nearby ants 'when you wake up, take the seeds and spread them throughout the garden'.  Whilst at first I thought they might not have heard me, it turns out they must have done as a few years later they are now popping up throughout the garden.  Planting cyclamen was a good decision. 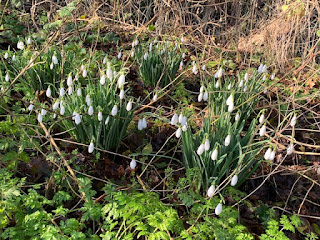 Another decision I made when I first moved into this garden was to plant lots of snowdrops.  Most years I plant 200 or so and now I also divide the existing clumps.  The first snowdrops planted over ten years ago are now forming good sized clumps.  The plan to have lots of snowdrops has worked and this was very much a good decision.

Not all good decisions, as mentioned above, are about what to plant; some are what to remove. 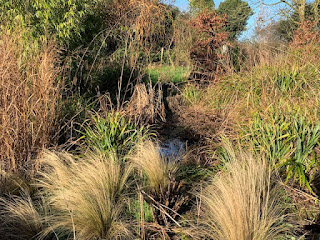 Mid-last year I wrote one of my regular 'Irritating Plant of the Month' posts about a barrier of Rose 'Claire Austin' that I had in the Pond Border.  I had planted these roses some years ago and they had formed good large plants.  I never minded that they blocked the view of the pond as I liked that I had to walk around the garden to discover the pond.  Not having the whole garden on view immediately and having to discover things is something I like.  As time went on though they had become to feel like a barrier, too much of a block that somehow no longer worked for me.  I did not remove the rose bushes completely as removing a rose bush is a big task and costly if it later turned out that actually I liked them after all.  For the first month or two I just kept them pruned right back to the lowest I could go.  These are tough rose bushes, they were not going to die from this treatment.

A couple of months into this routine and I decided that the one of the three shrubs was now definitely missing from the view that I liked.  I allowed that one to grow back (more of this later in the year as it grows up again).  The other two, the most central two, have remained cropped and now fully expect to be removed completely.

The decision to cut back the roses was a good one, the decision not to go past the point of no return for all three shrubs was also a good one.  Now I stand in these Winter days and look across the pond from a viewpoint I have not had since the pond was first created and  I smile.  I rather like seeing the pond from this perspective.   Ten years after the initial creation of this border I feel another set of decisions coming on..............
cyclamen coum pond Rosa Claire Austin roses snowdrops