Irritating plant of the month - you're just in the way

June 20, 2019
Those of you with a nervous disposition need to look away now.  This month's tale of woe involves the brutal removal of several rose bushes. 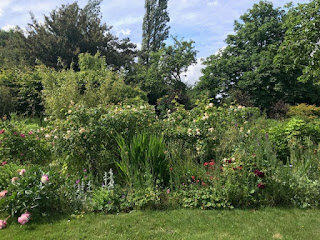 I shall explain.  I have planted the roses in my garden since starting developing the garden twelve years ago.  The roses in the Pond Border must be around ten years old give or take.  I checked their size before buying and decided carefully where they should go.  Ten years later and they are all doing well, some of them a little too well be honest.  Dear reader, this month's irritating plant is, with some regret, Rose Claire Austin. 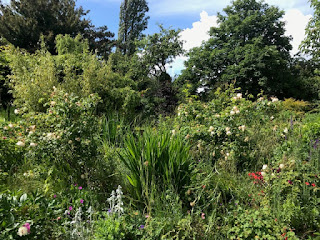 This is actually a very good rose, I like this rose a lot and I bought six of them in total.  One  was in the front garden and was removed a few years back when I revamped the Knot Garden.  One is in the Coal Bunker Border and one is in the Conservatory Border.  It has a nice ivory/white flower and it fairly bullet-proof. 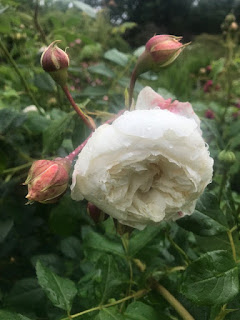 Despite my claims above of careful planting, for some reason I planted three in the row in the Pond Border.  This is a vigorous rose and needs hard pruning to keep it in any sort of check.  Even with hard pruning the ones in the Pond Border formed a sort of hedge that blocked out a lot of light around them and, well, looked rather more solid than I liked.  I have slowly reached the opinion they need to go.  I kept thinking about it and thinking about it until suddenly I could delay no longer.  The loppers were deployed and the middle shrub was taken out.  Already the border looked more open. 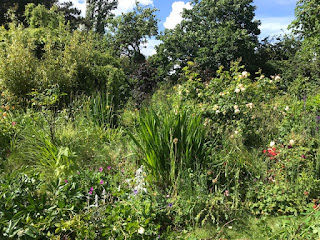 Lop lop lop lop - the second rose was removed.  I am quite scratched by this point but definitely on a roll. 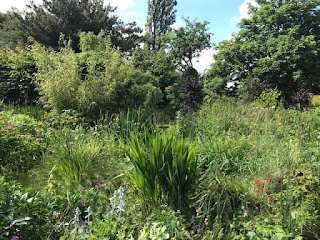 Loppity lop lop lop, the third was removed.  I also removed a couple of small hawthorn trees that had been hidden from view and a few more obvious weeds, but I need to go back in and sort this area properly.  I'm already thinking the crocosmia is getting too big for its boots..... 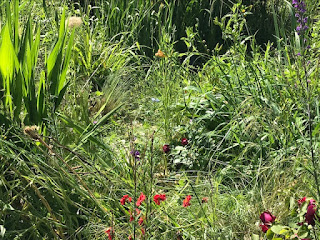 First immediate benefit was the reveal of this small red rose to the rear of the photo that was swamped by the larger white roses.  Hopefully it will now have a chance to do well. 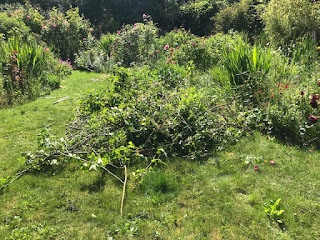 This is what three massive rose bushes look like then cut down.  Before you all start berating me for roseicide, I need to say that at this stage all I have done is cut them right down to be stumps.  I have not actually removed them.  I need to get used to seeing the space they have revealed then I shall probably take the plunge and remove them completely.  I have to say I really like the vista they have opened up across the pond.  Progress will be reported in my End of Month Reviews.
Irritating Plant of the Month Rosa Claire Austin