June 02, 2019
May has been quite warm, mainly warm and also mainly dry.  There has been some rain but not as much as some have had and not as much as needed.   I might be obsessing about the lack of rain more than is reasonable, but we have not had enough. 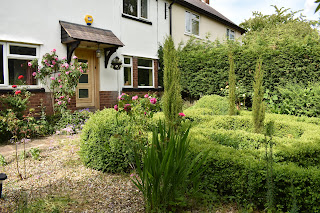 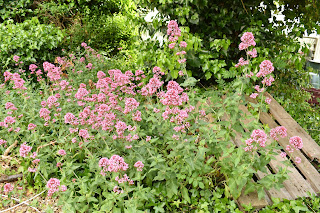 In an area better described as 'less perfection' there is an outbreak of Valerian.  I like Valerian as it is so good for pollinators.  It does has a tendency to take over any amount of available space whether it is really available or not.  I am not sure how so many have appeared almost overnight, but there they are and I have not the heart to remove them just yet.  I will have to remove them though at some point or next year I will not be able to get to the back door.  Do not worry though, there are plenty in other areas.  Oh and the discarded pallet is the cats favourite scratching area and snoozing in the sun opportunity.  It might not look the most decorative of things, but it saves the back of my sofa from cat-attacks. 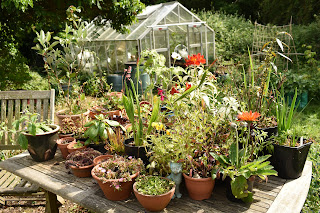 On the way in to the back garden the table that used to be for eating/drinking from but it is now full of plants is looking full of plants.  It is quite colourful and I can ledge a mug of tea on the edge still. 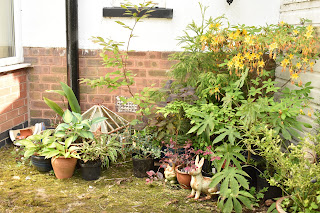 The Courtyard Garden is dominated by the superbly scented Rhododendron Luteum.  The hostas in pots are happy enough and you can see one of the aspidistras doing bunny-ears impressions at the back.  The bunny is also doing bunny ears, but that is closer to the front.... 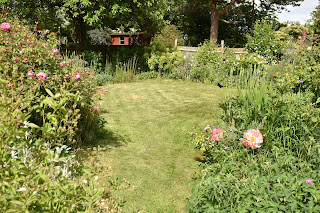 I want you to note that I remembered for once to cut the lawns before taking the photographs this month.  You might also notice that the lawn looks a little dry.  Did I mention we have not had a lot of rain recently?  It is still rather green but there are pops of colour.  The peony Coral Charm is flowering well and I think it might just be the best peony ever.  It is a wow of a plant, but it does need staking and, of course, I haven't.  I shall have to remedy this in future. 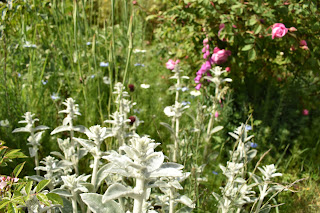 There is quite a bit of stachys self-seeded into the Pond Border and I am enjoy where it has placed itself.  It can get a bit carried away with itself but it is a great plant and worthy tolerating its foibles. 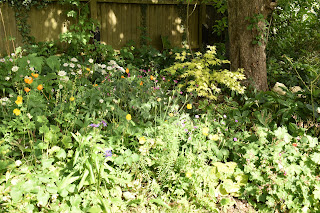 The Spring Border has now finished being peak-spring and it looking a bit splodgy.  For the rest of the summer it becomes the shade border as it is under the Bramley Tree. 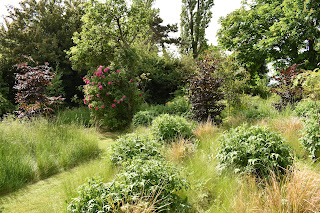 If I turn around from the Spring Border I see this view of the Prairie Borders to the right and the grassy knoll to the left.  The three beech pillars are looking more like pillars every day and the Wild Edric rose that is climbing up the apple tree can be seen it all its glory.  So far this year this rose has been the glory moment of the garden.  The Prairie Borders have not fully grown back yet from their spring hair cut, but they are getting there. 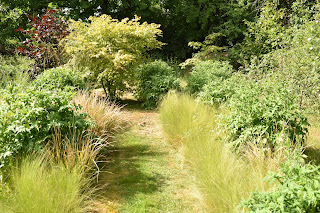 The mown paths through the Prairie Borders lead the eye, this one leads up to one of the Aldi acers.  Bought around 11 years ago now for about £2.50 each, I have two and they have become fine trees. 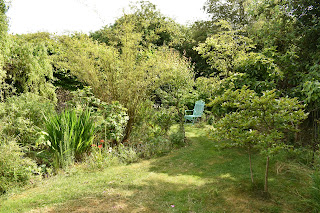 This the view across the Dancing Lawn.  The Exotic Border is on the left and the start of the Wild Garden is on the right and loops behind the apple tree that overlooks this lawn.  I am not sure how exotic the exotic border is going to be this year.  It is the sunniest border and has the best drainage in this overwhelmingly clay-based garden.  It is dominated by a large bamboo and I have just planted out the dahlias and Persicari orientalis into this border.  It will decide it's character for the year at some point. 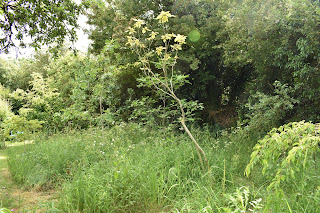 The Wild Garden is looking lush.  The bulbs are now over and the trees are leafing up well.  The cow parsley has just passed its best.  This part of the garden is full of all sorts of insects.  It is a great joy. 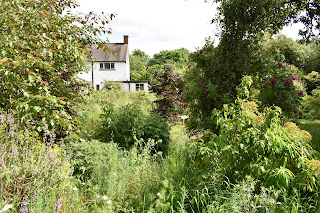 From the top of the garden  I look back over the Woodland Border, which quite frankly is not very woodland at all, but hey, my garden my rules.  I like this view.  If you peer closely you can see the bench that overlooks the pond, the Exotic Border is on the right by the bench and the beech pillars add colour and height. 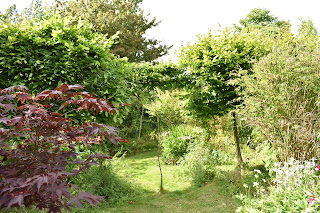 The pleached hornbeans are now joining up across the gap left by the now long-gone pergola.  This is very pleasing.  It has taken a couple of years to get to this stage but it has been worth the wait. 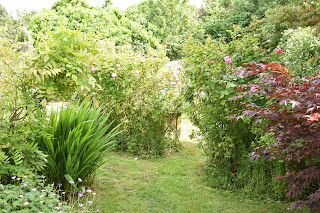 If I turn around from this point, the Carol Klein acer is to my right.  She is such a good tree now.  I am not sure how old this tree is as I did not originally buy her, but she lived in a pot before moving to this house and has been planted in the garden since about 2008.  To the left is the edge of the Pond Border and ahead is the Rosa Hyde Hall hedge.  The gap I go through to get to the veg borders the other side of the hedge does not look very distinct from this view.  I do have to manage it and stop it from sealing up by the rose branches.  The rose hedge was planted to replace the thrice-failed yew hedge.  I bless every day that the yew hedge never happened as the hedge flowers for months and brings great joy. 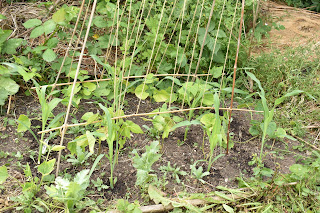 In the veg borders there are vegetables.  So far my year of focussing on being better at veg growing is doing quite well.  This is a border of sweetcorn, borlotti beans and courgettes; a sort of three sisters approach.  I have use this approach previously using the sweetcorn to hold the beans up and it does work; but I think the beans do need a bit more help, hence the support. 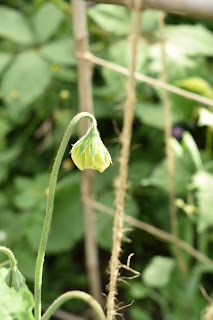 Soon there will be sweetpeas.  I still have some germinating in the greenhouse, but the first batch that were sown in March are about to do their thing. 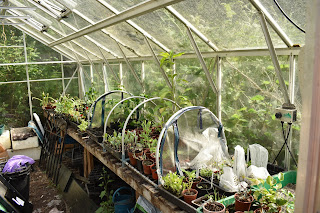 The greenhouse is in its mid-season mode.  I am no longer having to do the complicated game of 'Tetris' to try and fit every thing in, but it is by no means empty. 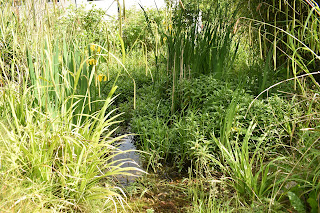 I finish as usual on the pond.  I have cleared out most of the parrot weed so that has given space for other plants to take over.  In the autumn I shall remove most of it to give the pond some space to breath.  The pond is currently only about half full, this is really really worrying for this stage of the year.  That the pond did not fully refill over the winter is a geninue cause for concern to me.  If we have another drought this summer we are starting at a much lower point in the water table and the effects will be faster and worse.  I feel like the voice of doom but......

Thanks as ever to Helen for hosting this meme.
End of month review End of month view Gertrude Jekyll