It is clearly an annual event that I stand in front of the pergola and consider it.  I mainly consider its longevity, or should I say lack of it?  This time last year the pergola was wonky.  I purchased the means to make it less wonky and less wonky it has remained, but....

but having straight uprights is not making up for the rotting horizontals, so I knew a decision was going to be needed sooner rather than later. 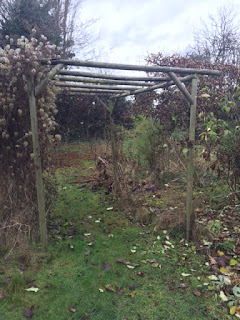 I could just replace the horizontals?  It's not a massive job and it would preserve the home of two rather nice clematis that grow up each side.

Or I could remove the pergola (and said clematis) and put in a new hornbeam to pleach. 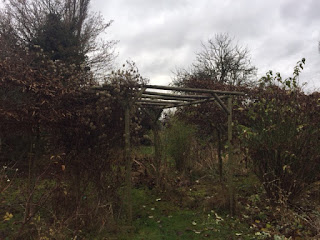 I began to think about putting in a new hornbeam and I realised that this would make more than a little change.  Let me explain:

The pond is fairly central to the garden and with its surrounding border it takes up quite a wide spread of the garden.  When out in the garden I have to decide whether to walk to the left of the pond, through the pergola into the Wild Garden and around to the Prairie Borders; or go along the formal lawn to the right of the pond and into the Prairie Borders and around to the Wild Garden.  The pergola makes a sort of gateway into the left of the garden.  If I put in a new tree it will change the spacings as it will have to go fairly central into where the pergola currently stands. Height also has to be considered. If I put in another hornbeam then I would have to raise its pleached arms so I can comfortably walk between the trees, in fact I would have to make an arch in the hedge.  I like the sound of an arch.

After going through this thought process there was little left to consider as this all seemed rather exciting; so I bought another hornbeam.  I popped it into the vegetable beds whilst I thought a little further, just to be certain I was not going to change my mind. 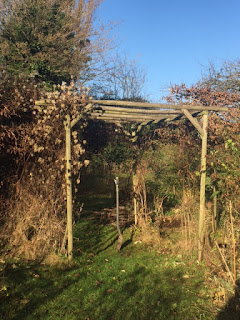 A nice mild day arrived and I spent a few hours walking around a spade left in the position where the new hornbeam would need to go.  I decided it was time to stop shilly-shallying and get on with it. 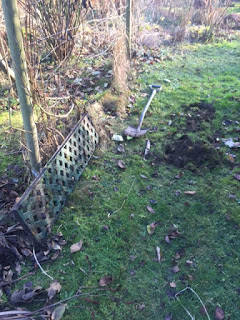 First job was to remove what had once been the back-rest of a bench that had been in the garden when I first moved in.  The back had been used as a sort of bridge over the artificial stream that briefly was created in the garden.  When I filled in the stream I put the bridge back, grass grew over it and it sort of created a reinforced bit of ground where I often walk.  It now needs a new role in life. 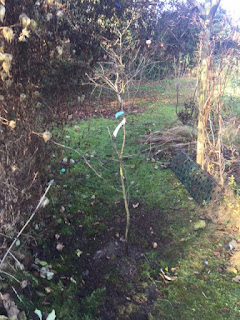 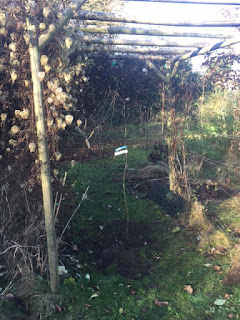 ....and then I trimmed off most of the lower branches.  I decided I would leave the pergola standing until it either finally falls or until I know the tree has settled in ok and the pergola is surplus to requirements.  When it falls hopefully the tree will have grown a bit and be more the required height.  By then I will have also worked out what to do with the clematis as well.