May 26, 2019
When I first started putting trees into this garden one of my dearest wishes was to grow a Davidia.  I bought one, killed it.  I bought another and planted it in another part of the garden: killed it.  I bought a third, the last one under the rule of three (three strikes and you're out).  It lived, it nearly died, a tree fell on it, but it lived.

Since planting the Davidia the garden has grown up around it.  Due to said tree falling on it, it has been little more than a glorified twig, as it was halved in size which means it is not as tall as it should be for its age. 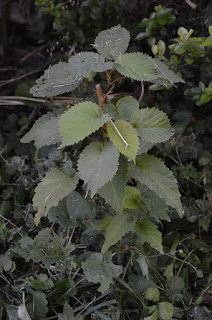 It was healthy enough though.

Every spring I keep an eye on it, waiting for life to return and this year it was not doing so with any vigor.  I watched it over the days and still there was virtually no sign of life.  I worried about it, I thought it might be dead, but at least little sparks of green appeared.  I stood back and considered its position.  What has been quite a sunny sheltered spot was now rather shady.  I wondered whether it was getting enough light. 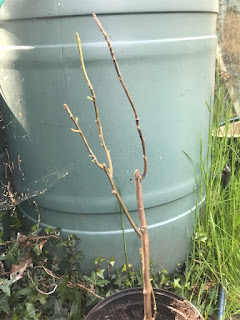 After much thought and concern I decided to dig it up and put it in a pot for a while.  Whilst this sounds drastic, as often in these cases the worst thing that could happen is that it might die faster rather than just withering away. 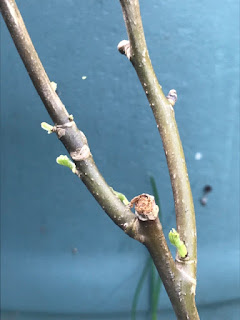 I have also learned from last year's experience that putting some plants into pots seems to perk them up.  So I wandered up the garden with a spade and dug it up.  I watered it carefully and whispered words of love. 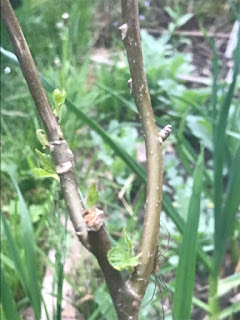 A week later and there is definite growth.

For the meantime the tree will be fine in the pot and it will hopefully give it some respite and time to gain some strength.  It will stay in there for at least one year, at least.  I may keep it in there longer.  It is destined to spend some time in the Courtyard which is partly the home for plants I do not feel confident to put out in the garden just yet.

The Davidia is not really an irritating plant in that it does not annoy me, but it is a cause for concern.