The quest for the right Liquidambar

November 12, 2015
One of the joys of my garden is that I have the space to plant some trees.  I have been able to plant many of the various trees that are on that list that has accumulated over the years.  The progression of this tree planting has not always been easy.  A couple of trees that I have planted have struggled for various reasons.  I tried several times to get a Davidia to grow, it needed relocating, it needed some tender loving care and it needed not to have a huge chunk of poplar tree fall on it.  It has however, done really well since its last adventure and I think I can declare the Davidia now established and growing.

Another tree I have gone to the limit of the 'three tries and you're out' rule is a Liquidambar.  I planted one very soon after moving into this house.  It started to grow well until an unfortunate incident with an out of control brushcutter decimated it.  I felt very stupid after cutting it down and bought another to replace it the following autumn.  I tried this one in a different place.  This was a mistake, it became apparent after a year that it was not thriving, it was not happy at all.  So I dug it up and relocated it, which was my second mistake.  Well, it was either a mistake or just bringing on the inevitable.  The long and the short of it was that after hanging on for another year it finally gave up the ghost and died.  I thought for a while whether I should try and again and decided I would. I also decided that some research on getting the best tree would be a good idea.  So a visit to a local arboretum was clearly in order so off to Bluebell Arboretum I went. 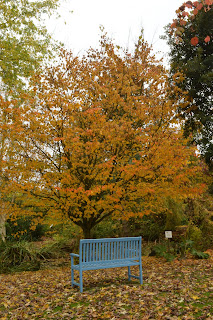 The day of the visit started quite misty but the sun eventually broke through.  We wandered around admiring various trees but my focus was on Liquidambars.  A shortlist was drawn up: 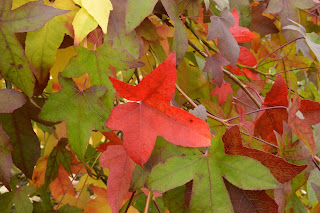 Leaves were studied and admired. 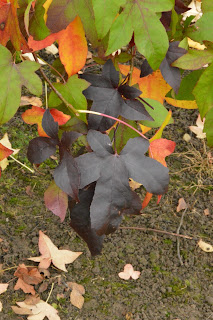 Shape was considered as well as colour. 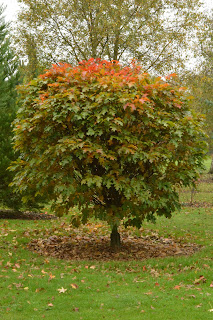 Size and shape of tree and the how the autumn turn worked down the tree was also on the list for comparison. 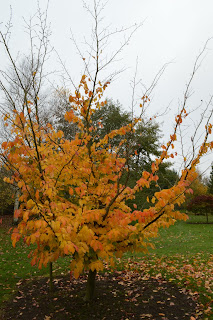 There was a lot of variation of colour, 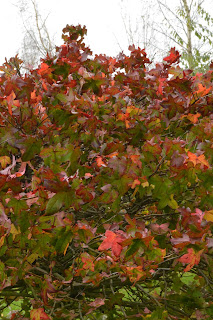 Some were brighter whilst others were darker, 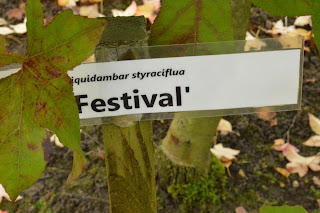 Names were photographed so I could remember which I had seen and liked and consider before purchase. 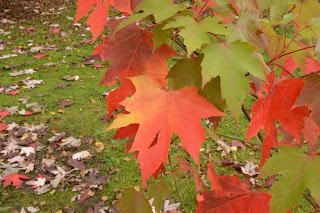 This was very useful as there was so much to think about;

and then the winner was found, 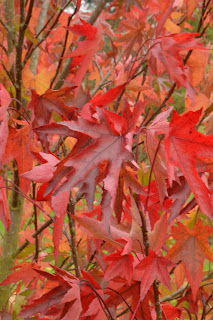 I thought this one had the best colour and the best leaf shape.  It is: 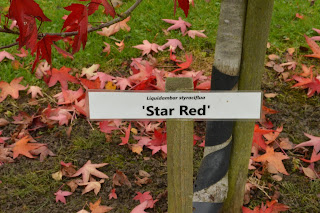 I fell in love with this tree and had to have one.  Sadly there were none in the nursery so I knew some internet searching would have to follow.  I eventually found one called Red Star, a bit of research later I found that the latin name for them both is Liquidambar styraciflua ‘Stared’.  I also could not see a difference and so a purchase was made. 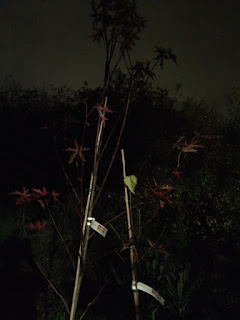 Now we all know that if we order bare root trees this time of year that they will arrive on the day you get home the latest from work and when it is raining and blowing half a gale.   10 minutes of unpacking by torchlight later I realised they were not bare-root but in containers so whilst they did need unpacking, I realised that I did not need to quite rush to release them. 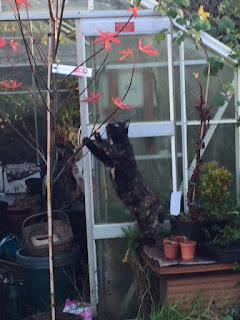 Esme had to approve the choice of tree before it could be planted.  It passed the test. 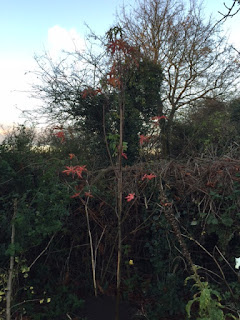 The tree has now been located in the top boundary of the garden, the soil is good up there and it helps fill the gap left by the poplar destruction. 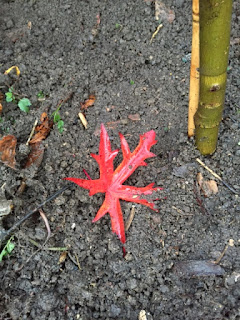 It shed a few leaves as I planted it, I had to stop and look for a moment as they are truly beautiful leaves.  I am really hopeful that this time I will be successful.

Hang on a moment I hear you say, that dark photograph seems to show another tree, with a definite non-liquidambar leaf and you used a plural back there when you talked about unpacking them.