May 07, 2019
When I saw that there was a new book about Kiftsgate Gardens and that it was subtitled 'Three generations of women gardeners', I immediately asked if I could review it.  My motivation for wanting to read this book is that Kiftsgate is a particular favourite of mine.  I have visited Kiftsgate a few times and I regard it as a garden with heart.  This meant the book had quite a job to do to ensure it lived up to my expectations. For the purposes of transparency I have to declare that I have not paid for this book, however my words and opinions are my own and I have received no payment for this review.

Vanessa Berridge, the author of the book, is a garden historian who has written and contributed to several books and also writes for magazines and newspapers.  The photographs are by Sabina Ruber who is a well known accomplished garden and plant photographer whose work appears in many books, magazines and newspapers.  The foreword is by Robin Lane Fox, who writes the weekly gardening column in the Financial Times, he is renowned for his scholarly writing on gardening.  Even before opening this book I was impressed by the credentials of those involved in its creation.

This books works because it is more than a book about the garden. It is in two distinct sections: starting with its history and the descriptions of the three women who have created and dominated this landscape with their talent, vision and personalities.  The first was Heather Muir, who moved to Kiftsgate 100 years ago in 1919 with her husband Buchanan.  The next woman to take charge of the gardens was Diany Binny, Heather's second daughter.  Diany and her husband made many changes to the house and gardens when they took over the running of them in the 1940s.  In the 1980s the house and gardens moved to be run by Diany's daughter Anne.  The house and garden has remained under Anne, a family garden and gardened to be so.  I am not going to go into detail because that is what the book is for.  What I was interested in reading about where Anne set up the nursery/plant sale work in the garden so that visitors could take home a piece of Kiftsgate.  I have my piece of Kiftsgate, my brugmansia was bought from there a few years ago and it is always one of my favourite plants.

The book then takes us around the gardens a section at a time.  This is not a garden set in aspic.  Each generation has made and makes its contribution to its development.  There are surprisingly modern elements in what could be seen as a traditional interwar garden.  It is a garden of challenge and surprise.  Vanessa writes skillfully about this, keeping it all in context.  This is supported perfectly by Sabina's photographs.  It is a book that is generous with its photography, the pictures are plentiful and a good size.  I like the nice touches, I like that there is a ribbon bookmark built into the book.  It is a book to be dipped in and out of and handy a handy marker is very useful. 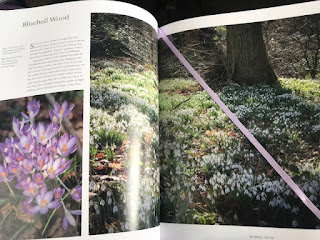 I also like that there are vignette biographies and explanations throughout the book about important people who are mentioned.  So there is a section on Major Lawrence Johnson, their Hidcote neighbour; there is another on Vita Sackville West and also artists and other notable people who have had a connection and/or influence on the gardens through the generations.  Possibly my favourite part though, through all the very charming family photographs, is the cartoon on page 41 by Simon Verity who was also the sculptor of the seated woman that now features in the garden.  It shows the ability to not take oneself too seriously, always a good quality.

It is good that there is a section on the current Lead Gardener, Philip Vincent, who has worked at the garden since 1993 with both Anne and her mother Diany. Another key member of the team mentioned in the book is Tom Coleman, the chief propagator.  Amazingly the gardening team is really quite small.  This makes it clear that the garden is an astonishing labour of love and commitment from all involved.

It is a joy of a book.  If you have visited Kiftsgate then this books gives valuable insights into the creation of the garden.  Even though I have visited several times I saw some areas that I do not recall ever seeing (which means I have to return to find them).  If you have not visited Kiftsgate yet (and I do mean yet, you should visit if you can), then this is invaluable preparation for your visit.  Vanessa overlays history and charm onto the fabric of the garden.  There is something about knowing more about these incredible women who were not short on personality, that really adds to the knowledge of the garden.  I now need to return to the garden soon.