I am not sure where I was when I first encountered a perennial sunflower, but the very thought of it seemed magical to me.  I have grown annual sunflowers for years, some years more successfully than others, but the notion that there could be one that would reliably return every year was a plant I just had to have.  I was aware however that they could be a 'vigorous' grower. 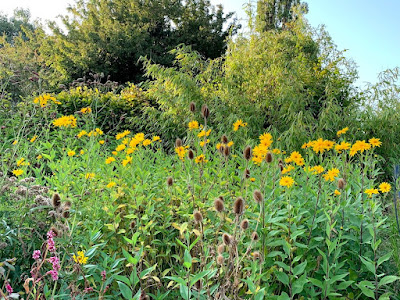 Now we all know that 'vigorous grower' is often code for 'this will spread, grow it only if you think you can control it and if you think you can control it you are probably wrong'.  Which is absolutely true in the case of this sunflower, it is thuggy mcthugface.  It is also fantastic late colour and wonderful for pollinators and birds.
I originally planted three Helianthus 'Maximiliani' into the Pond Border and yes they soon spread.  It got to the point where I did not think I could grow anything else in that border.  So I dug two of the clumps out, which did take quite a while as if you leave any of the tuberous roots behind they regrow.  The remaining clump I eventually worked out was fairly easy to control if you wait until the perfect day to do it.  The perfect day is a wet wintery day when the ground is sodden and the top growth is all dead.  You can then pull them up quite easy and most of the time the tuber will come with them.  As I am not trying to eradicate it, the bits that stay behind are fine, the end result is still thinner than when I started. 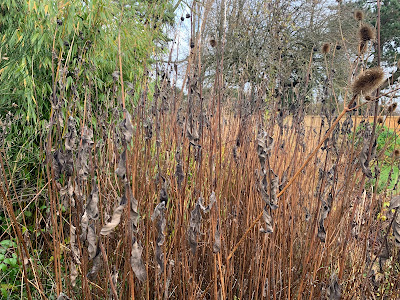 The clump in the Pond Border looked like this, it was two years worth of growing as due to my broken ankle last year (have I mentioned I broke my ankle?) it did not get done. 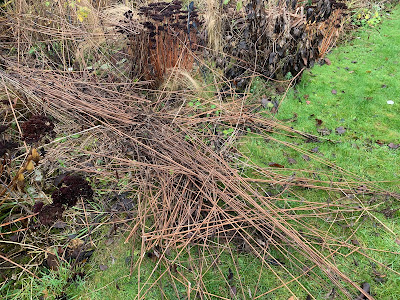 There was soon a goodly pile of detritus mounting up on the lawn. 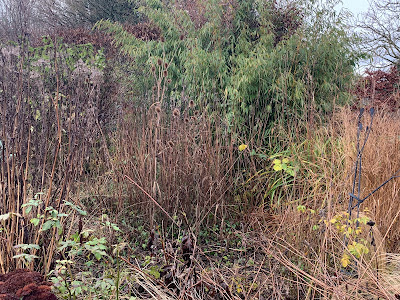 Happy with the result, which I admit is not easy to really see but there is now a large weedy gap where there wasn't one previously, I moved onto the Prairie Borders where the helianthus was similarly making its presence felt.  It was growing so well that earlier this year I dug up the middle smaller Prairie Border as I decided I needed to restart/rethink it.  I am still rethinking it, it is just an empty space at the moment and I do need to kick my brain into action and decide what to do.  I am waiting for the garden to tell me what it wants, it will, eventually. 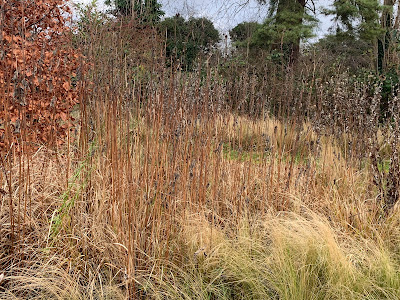 I knew it was a risk planting this sunflower into the Prairie Borders, so I blame no one but myself. 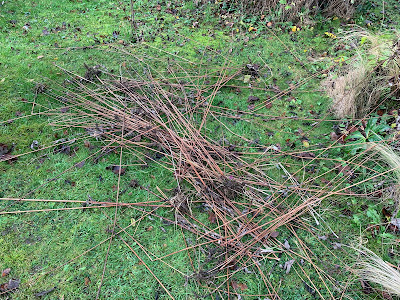 Quite swiftly another pile of stalks and tubers accumulated..... 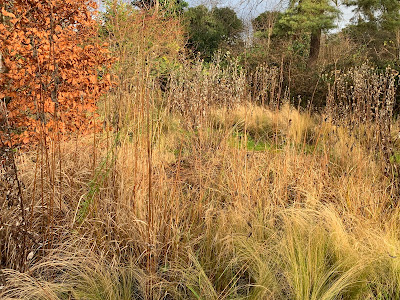 ... and I was satisfied I have removed enough.  Of course time will tell and I will let you know next Summer if I have achieved the look I expected.
Until then....
Stay safe and be kind.
For more from the Blackberry Garden follow me on Twitter Facebook and Instagram
helianthus maximiliani perennial planting perennial sunflower winter garden tasks winter garden tidy winter gardening