The B Word update

April 14, 2019
or should I now call it the V Word as I am focussing on the veg rather than the other thing whose name cannot be mentioned.

A few weeks ago I wrote about growing more veg this year as the atmosphere of uncertainty made me think I needed some certainty I could count on.  I decided I would grow more vegetables this year and, as importantly, take more care about doing so than my usual hap-hazard approach.  So it is time I gave you an update.

The first hurrah is that I have started to harvest the purple sprouting broccoli I planted last year.  I usually grow this vegetable as I find it very well mannered.  It does not glut, because it is over-wintered it seems to suffer few pests and it tastes better than any broccoli I have every purchased.

The garlic I planted out in March is growing well.  The sticks are the anti-cat sticks to keep them off the veg beds.  You will also note the cracks in the soil, it is very dry here and I am on the verge of having to water these to keep them growing. 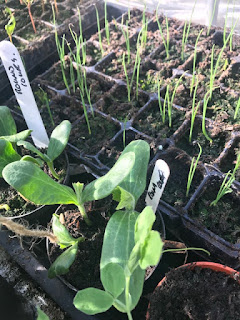 The courgette and onion seeds have germinated and look ok despite the recent frosty nights.  They will need pricking out soon. 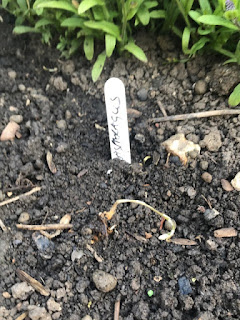 I have bought some seed potatoes at last and they will be grown in containers.  This poor looking thing is the bargain basket asparagus I purchased at the same time.  It looks more dead than alive but it was worth a punt.  I know that even if it does survive that I will not harvest this year, this is more of a long-term project.  Time will tell. 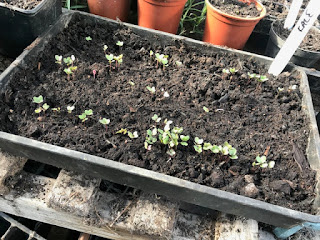 I had sown some kale seeds, 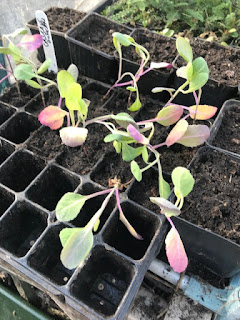 and bought some cabbage plugs.  When I showed a photo of my cabbage plugs on twitter it was remarked that they looked a bit hungry.  I potted them up to recover in the greenhouse for a week or so to encourage some decent growth. 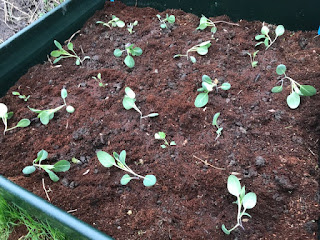 You may recall I made a new raised bed the other week, this was destined to be the cabbage bed.  The plugs developed well and so I planted them out.  I stood admiring them and then thought about pigeons.  Then I remembered the blue piping that has been cast aside for many years.  When the veg beds were first created some blue plastic piping was bought to create netted areas to protect the vegetables.  It was used for one year and then not again for reasons too complicated for anyone to care about.  During the 'great clear out' last year it was found again and made ready to go into a skip.  It did not fit in the skip so sat unloved but in the way again until last week..... 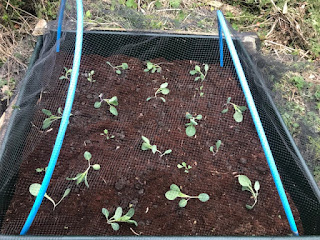 Piping hooped and net erected, it almost looks like I know what I am doing!

I am now hopeful that this last couple of weeks of frosty nights is now over, so there will be more more seed sowing.  I have french beans and sweetcorn to get started, wish me luck.
Cabbage Duncan Courgette GYO Kale Vegan gardening vegetable gardening