The joy of peperomia 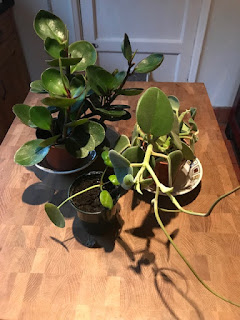 Currently there are only three; I say currently as I recognise that this will change fairly shortly. 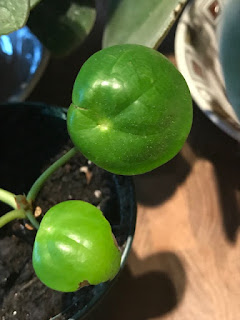 It began with this one, Pilea peperomioides, the Chinese Money Plant.  Now if you look this plant up you will see it often described as 'easy', it is also described as a) difficult to find and b) the friendship plant as it develops new plants very easily that can be given away to friends.  I found one relatively easily and as mine is rather small it was a reasonable price.  Whether it is easy or not I shall let you know.  It lost two or three leaves fairly alarmingly when I first got it but it seems to have settled down now.  It does not like to stay too wet so sparing watering is advised.  I have mine in a window that gives it light but not too much scorching hot sun. 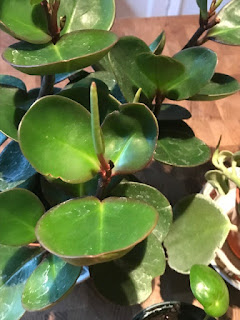 Next there is this one I bought the other day from Ashwood Nurseries.  It waved from me from the corner of their houseplant greenhouse and it felt rude not to wave back.  I did not throw the label away before writing down its name, that would be foolish........ ok I did, don't judge me.  It might be a Peperomia clusifolia Red Margin, but then again it might not be.  I like the red edges to the foliage and stems and also rather delightfully it has spikey flowery bits.  This is exciting.

I am lucky to have some very good friends who listen to my ramblings and then encourage my foibles.  I mentioned briefly the joy of the Pilea and lo and behold this rather darling plant duly arrived.  Its a bit like spacestar ordering.... 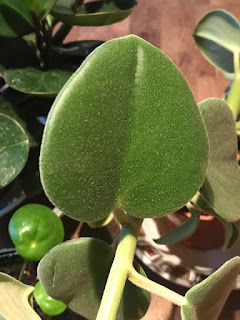 This is such a sexy plant, there is just no better way of describing it.  The leaves are wonderfully textured and it just has to be touched and admired. 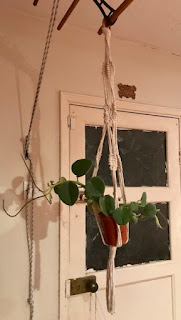 Here it is demonstrating my first attempt at making a macramé plant hanger (I went to a workshop at Crafty Sew and So we had a great time and I learned a lot).   I love the shape of this plant.  It sprawls well and has the long pointy flowery bits too.  Again I am rubbish with names so I am going to say it is a Peperomia polybotrya and wait to be corrected.

and yes of course I call it the peperami plant, its rude not to.

So watch this space, I already have my eye on another one I want (plant, not peperami).
houseplants macramé Peperomia clusifolia Peperomia polybotrya Pilea peperomioides