A visit to the Thompson and Morgan trial grounds

August 14, 2014
The other day I received an email that I can only equate to being like finding one of Wonka's golden tickets, it was an invitation to visit the Thompson and Morgan trial grounds which are at a secret location (no, really) to the east of where I live, actually to the east of where many people live.  It was an opportunity I just could not refuse so on the appointed day I set off, sat nav and instructions duly to hand. 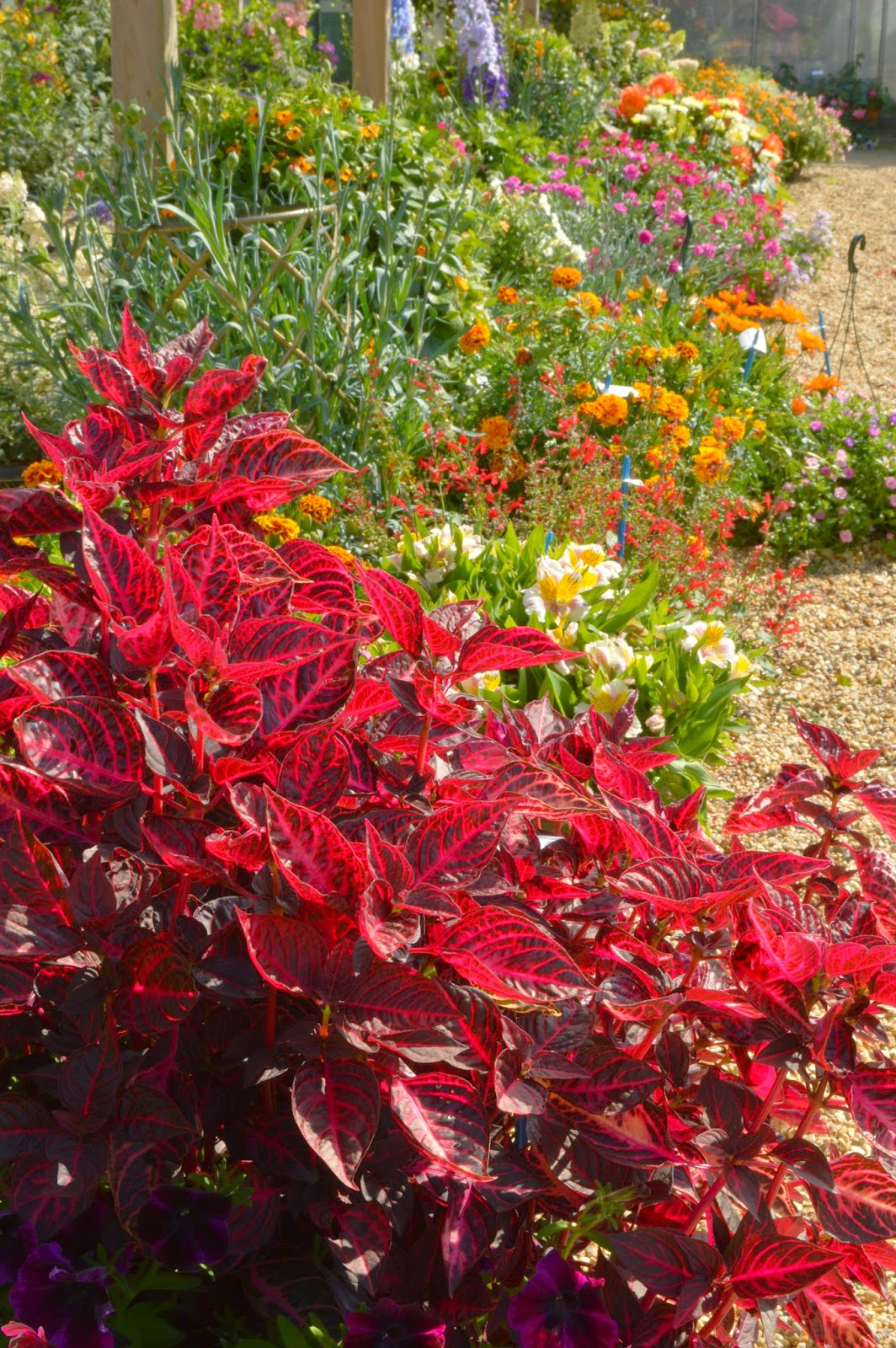 On arrival we were warmly welcomed by Michal Perry and Kris Collins; Michael is to many is the public face of Thompson and Morgan on Twitter and on home shopping channels and I suppose for the purposes of this day he was our Willy Wonka.  He showed us around, talking us through the plants: old favourites, new plants and secret developments for future seasons.  He talked about the history of Thompson and Morgan and the various different branches of the company which in itself was interesting as it was founded in 1855 which is a lot older than I thought (though admittedly I had not really thought about it much). 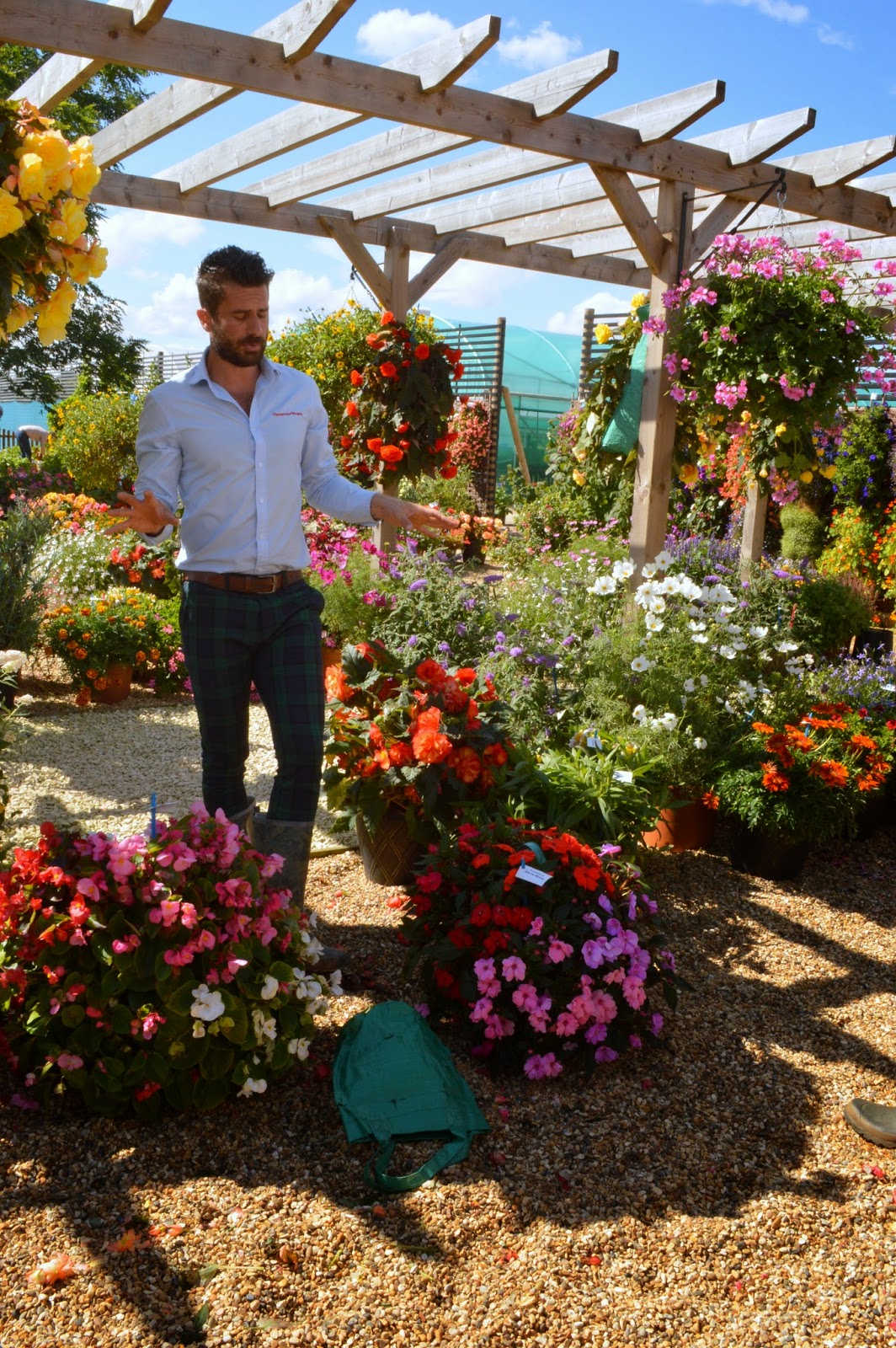 The trial grounds were fascinating, probably not as large as you would expect, though, again, I didn't really know what to expect.  The mass of colour from the planting was almost overwhelming and there were bees and butterflies everywhere.  Michael talked us through some of the thinking behind some of the developments they make in plant breeding of look for in other plant breeders.  They have buddlijas that do not seed around as prolifically as other types and scented begonias and petunias.  They sell plants that have good colour and performance and can sell plants that garden centres would struggle to market as they might not display as easily as other plants on the shelves but perform brilliantly in our gardens.  This shows I was clearly listening to the sales pitch. 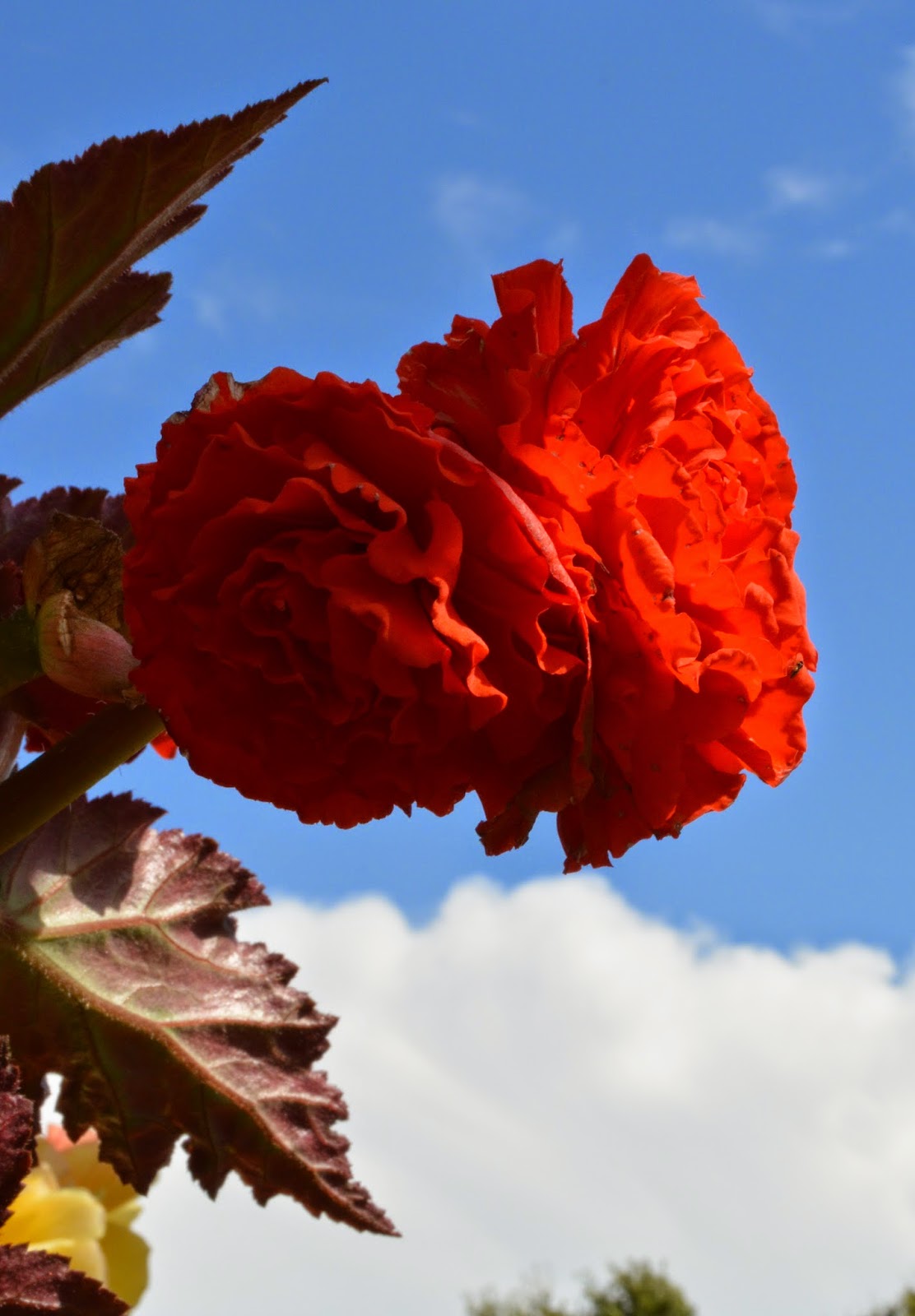 There were also products to see that show off the plants to their best advantage such as wall pouches, planting bags that can be moved around easily and hanging baskets.  They also develop planting mixes for hanging baskets that all flower at the right time yet do not overwhelm each other. 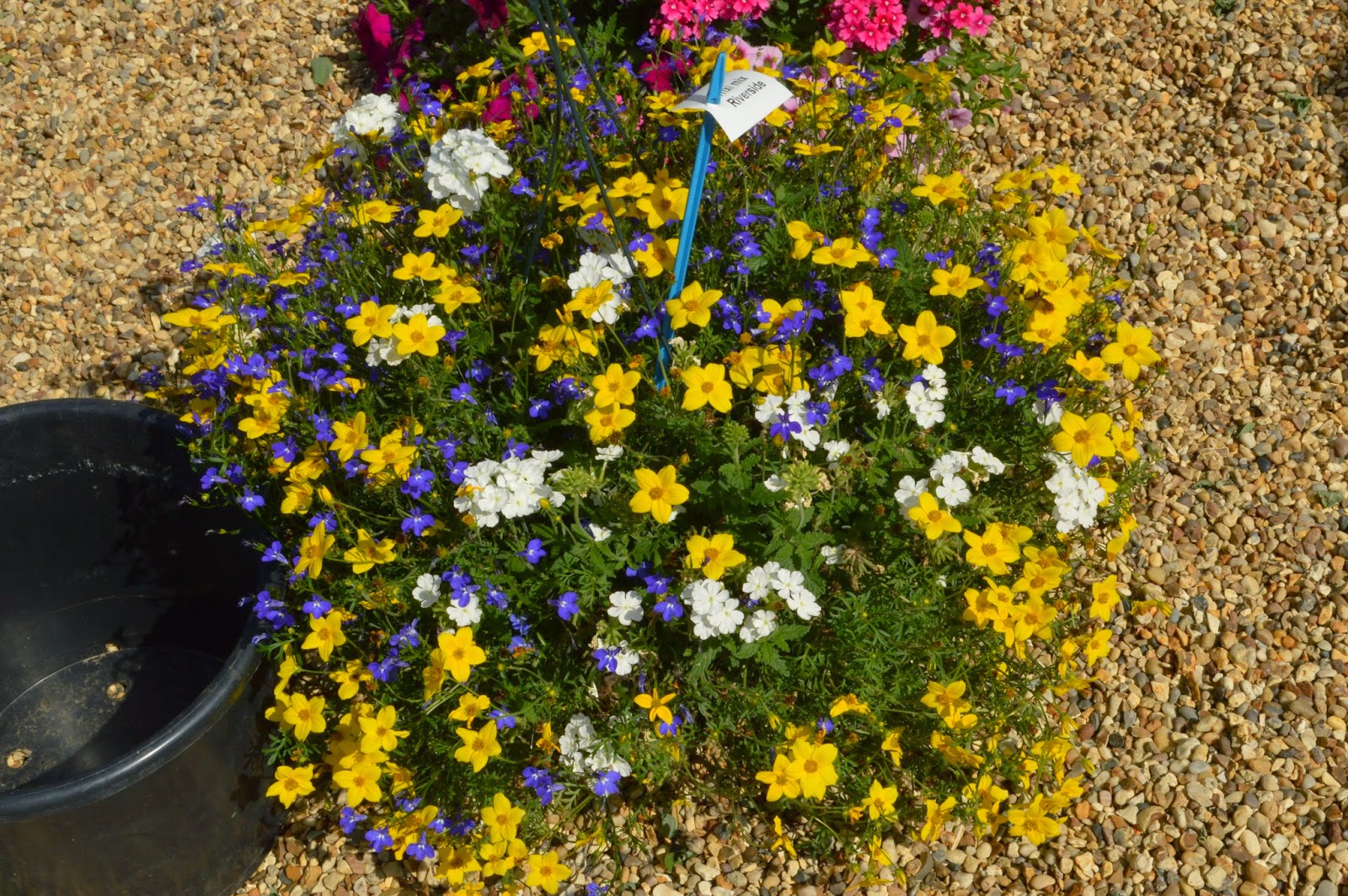 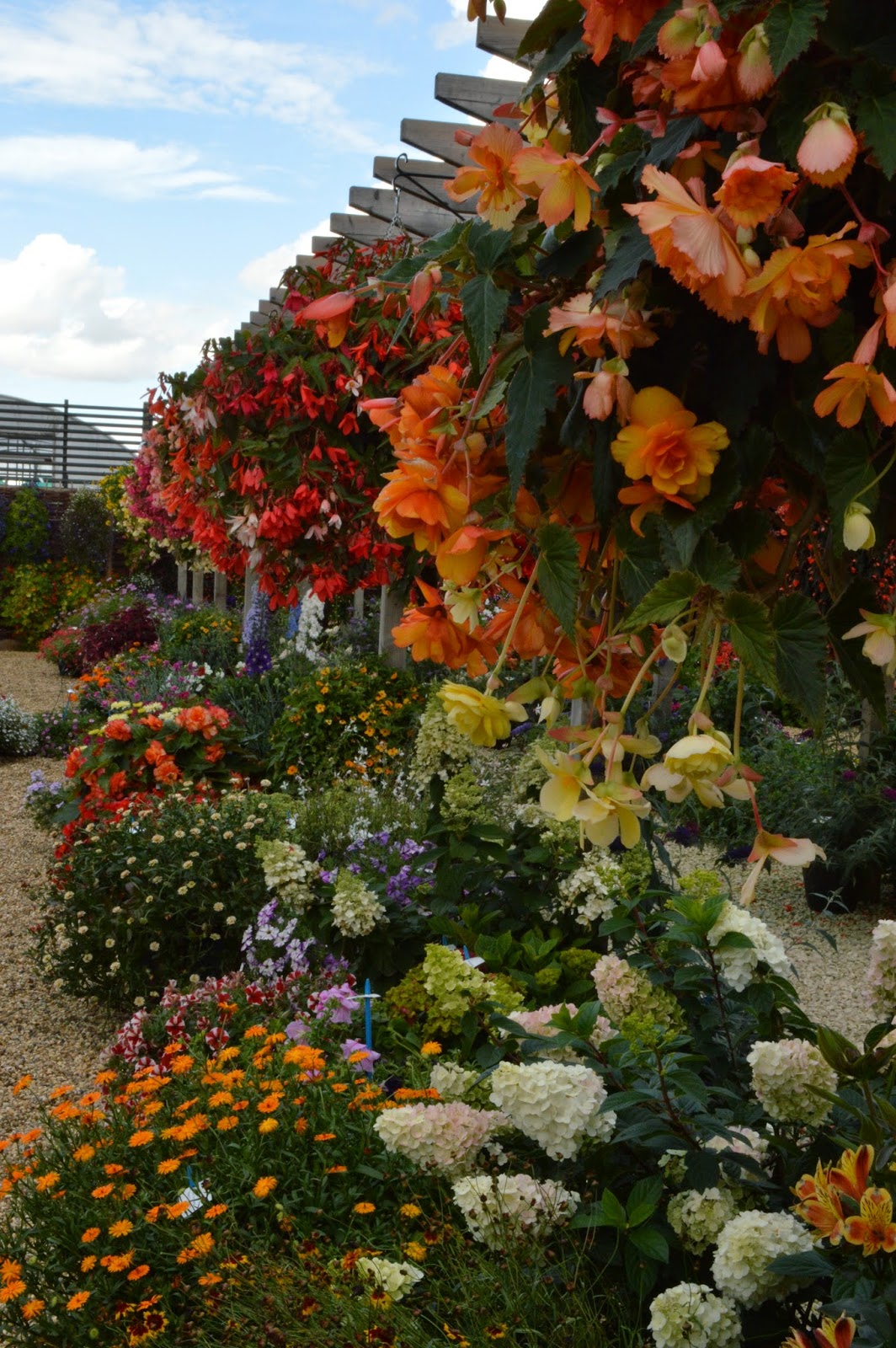 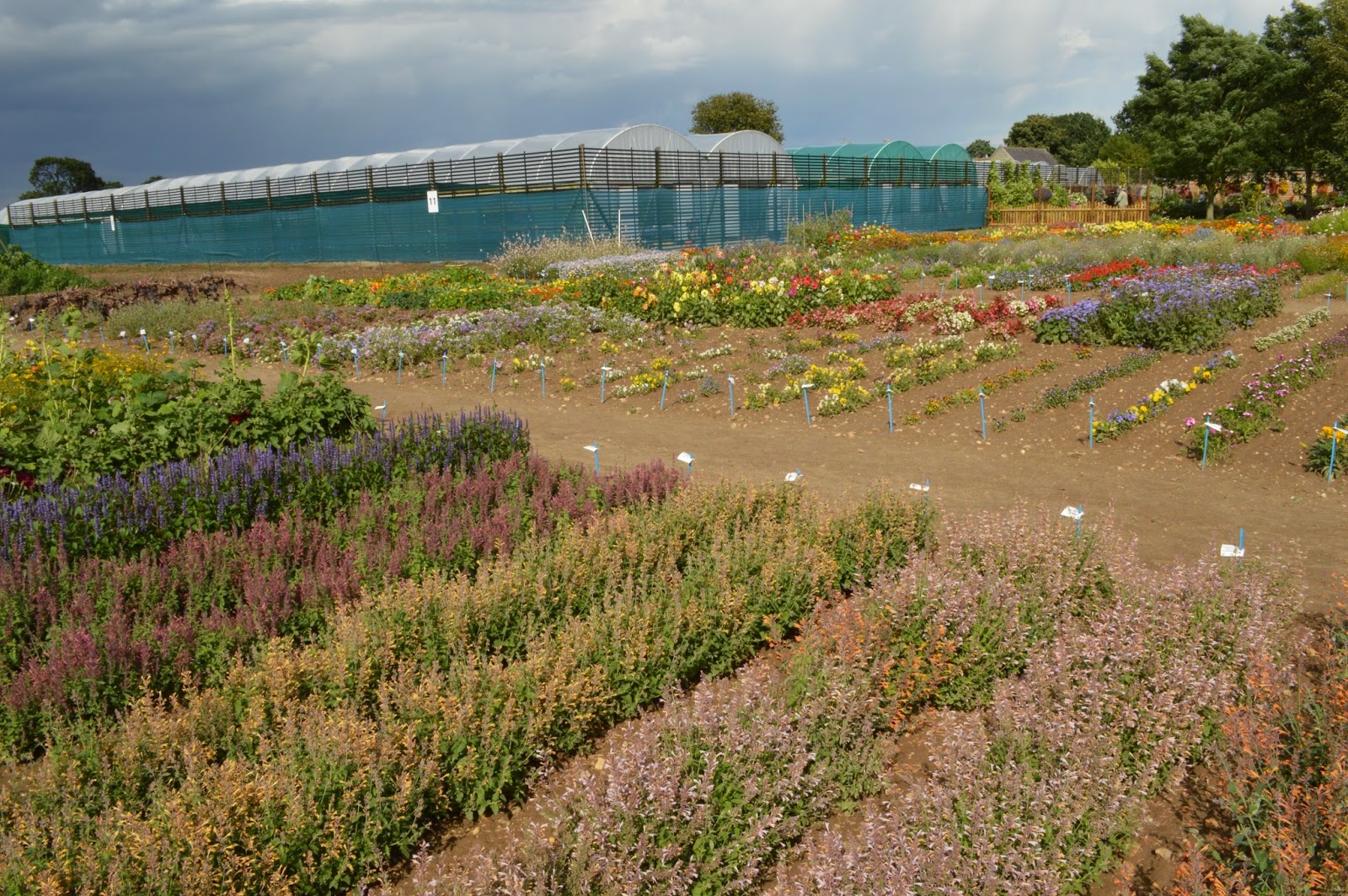 Row upon row, some being trialled for colour and form and disease resistance. 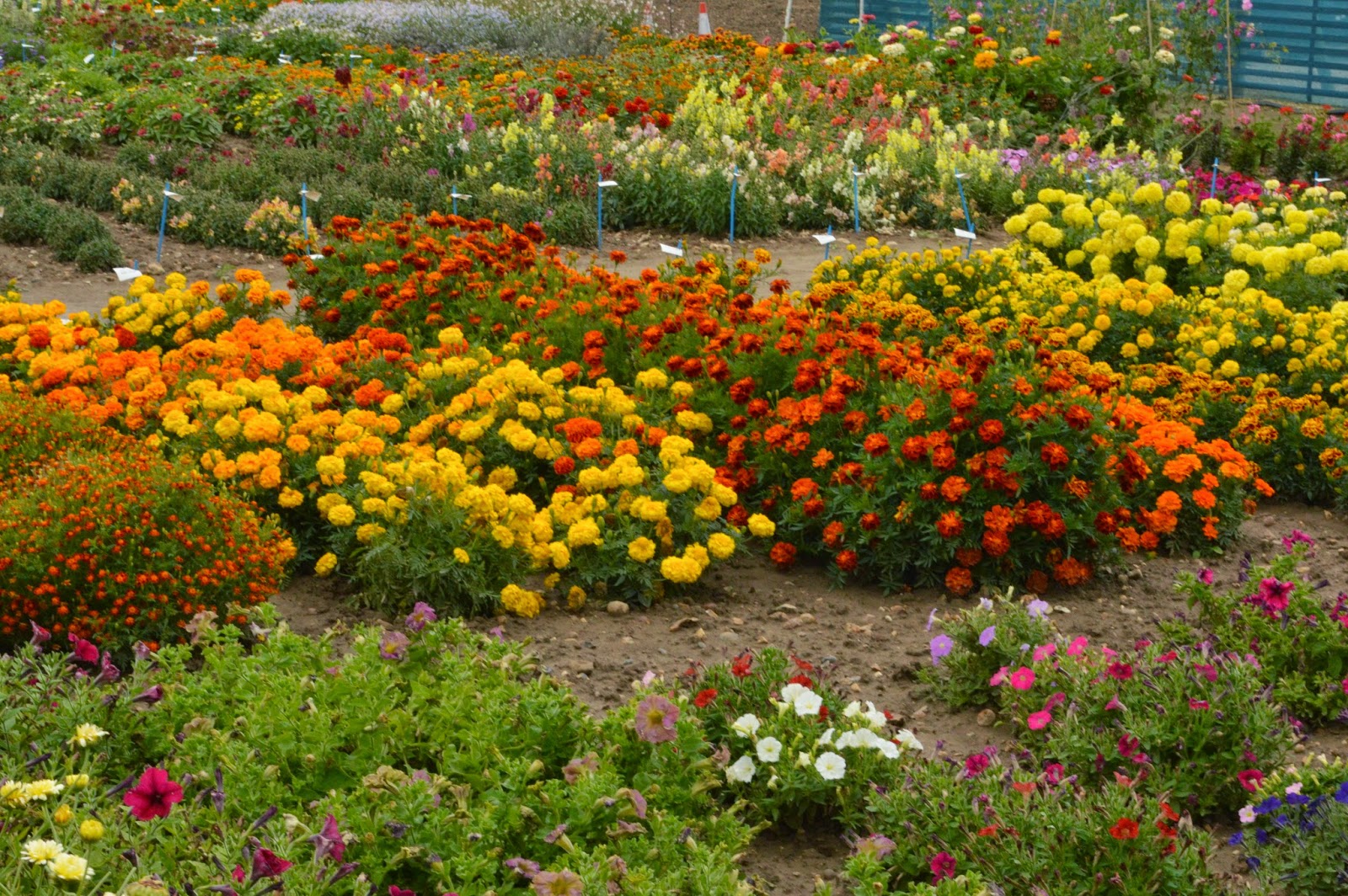 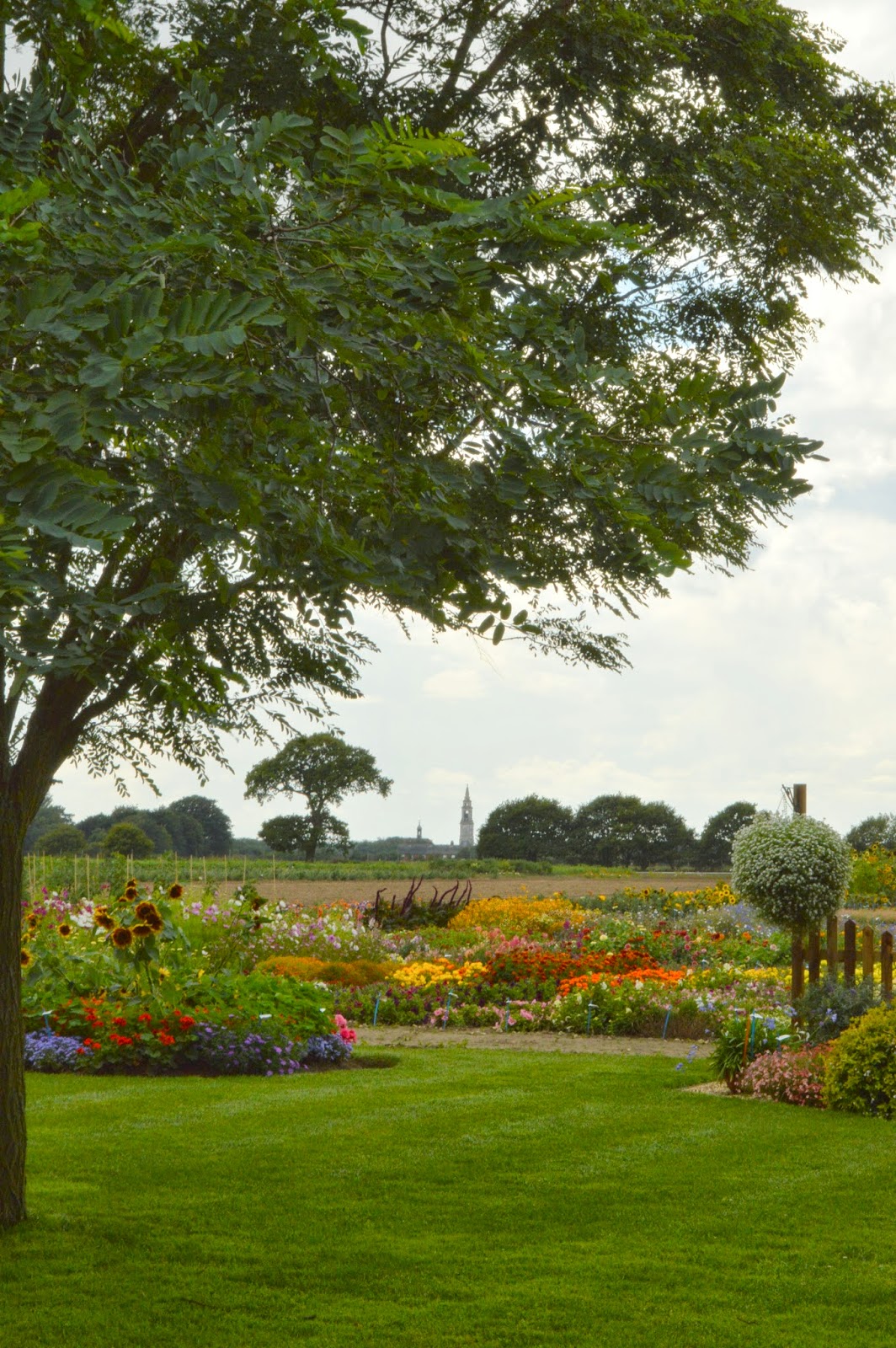 These rows of sunflowers just looked amazing.  It was a very blustery day and even though they were getting quite battered, most were standing up to it ok.  I love growing sunflowers and seeing the range of colour and size was fascinating.  2015 is apparently going to be the year of the sunflower, so expect to see lots of sunflower seeds to tempt you. 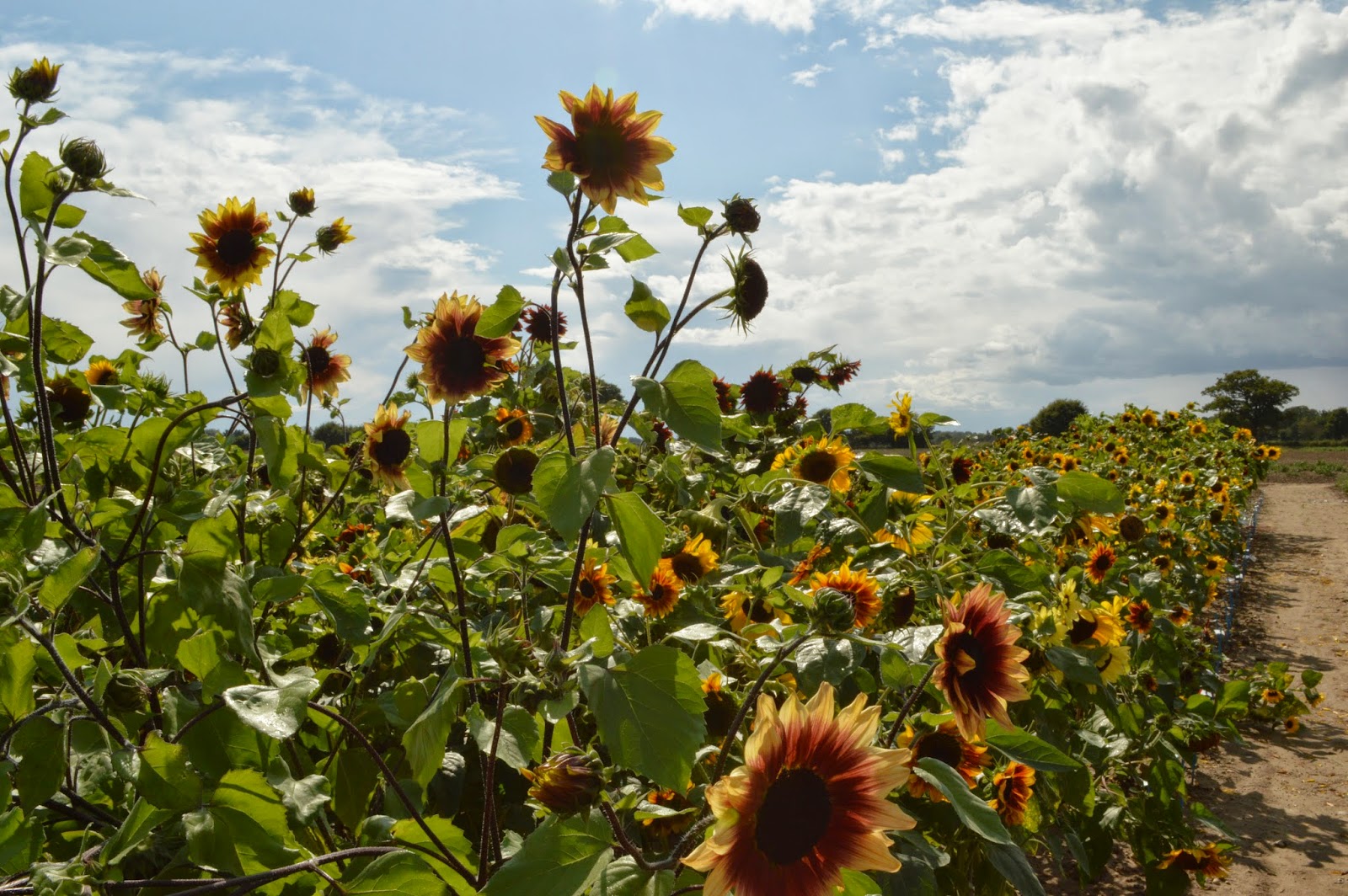 There were also some planted up borders and these were very well planted.  They have quite a team of gardeners and you can see the care and pride they take with these borders.  Obviously they are there to show off the plants to look their very best, and they do succeed in this.  This led to various oohs and ahs as we inspected the planting. 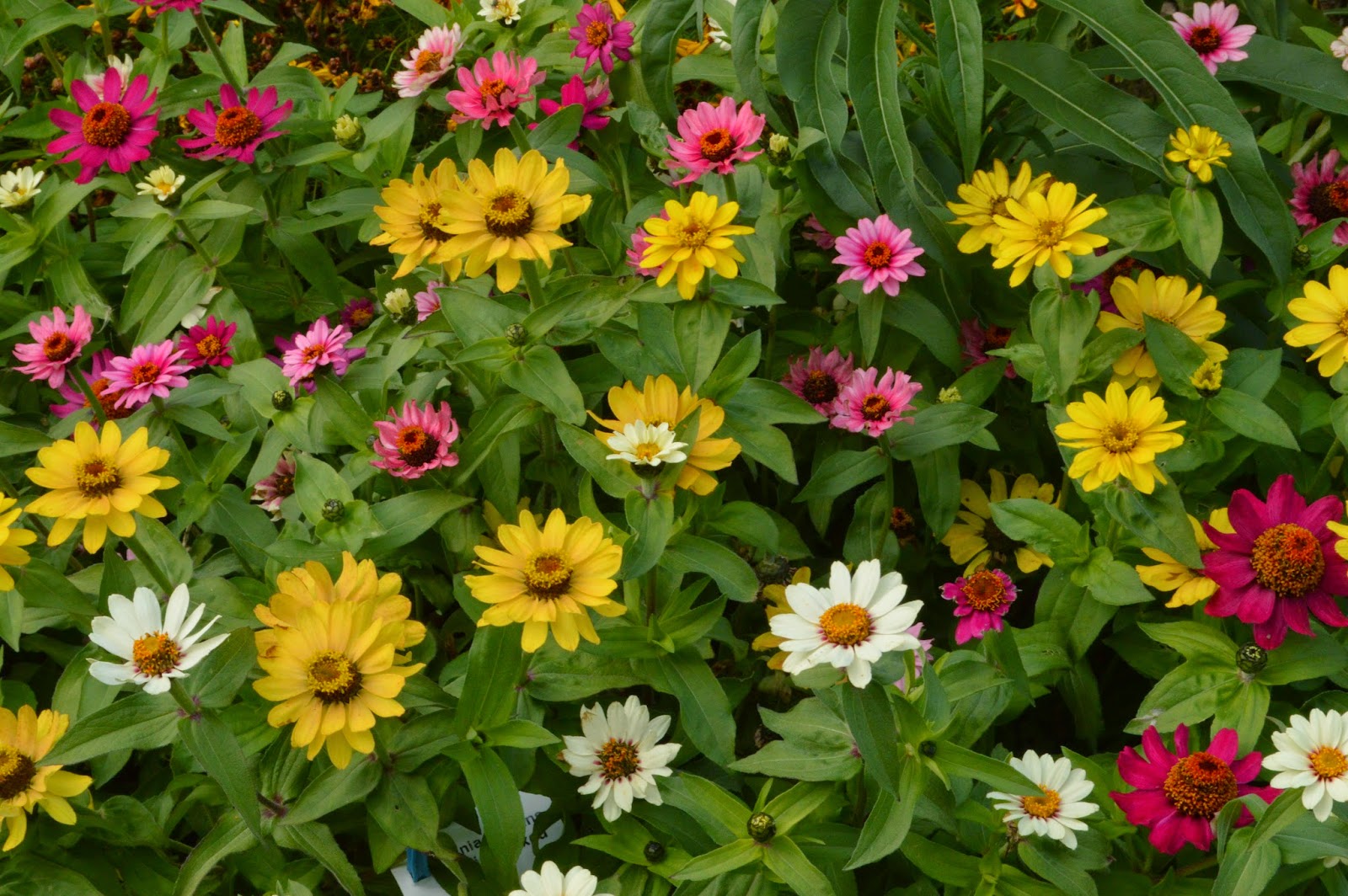 I love growing zinnias so these caught my eye, 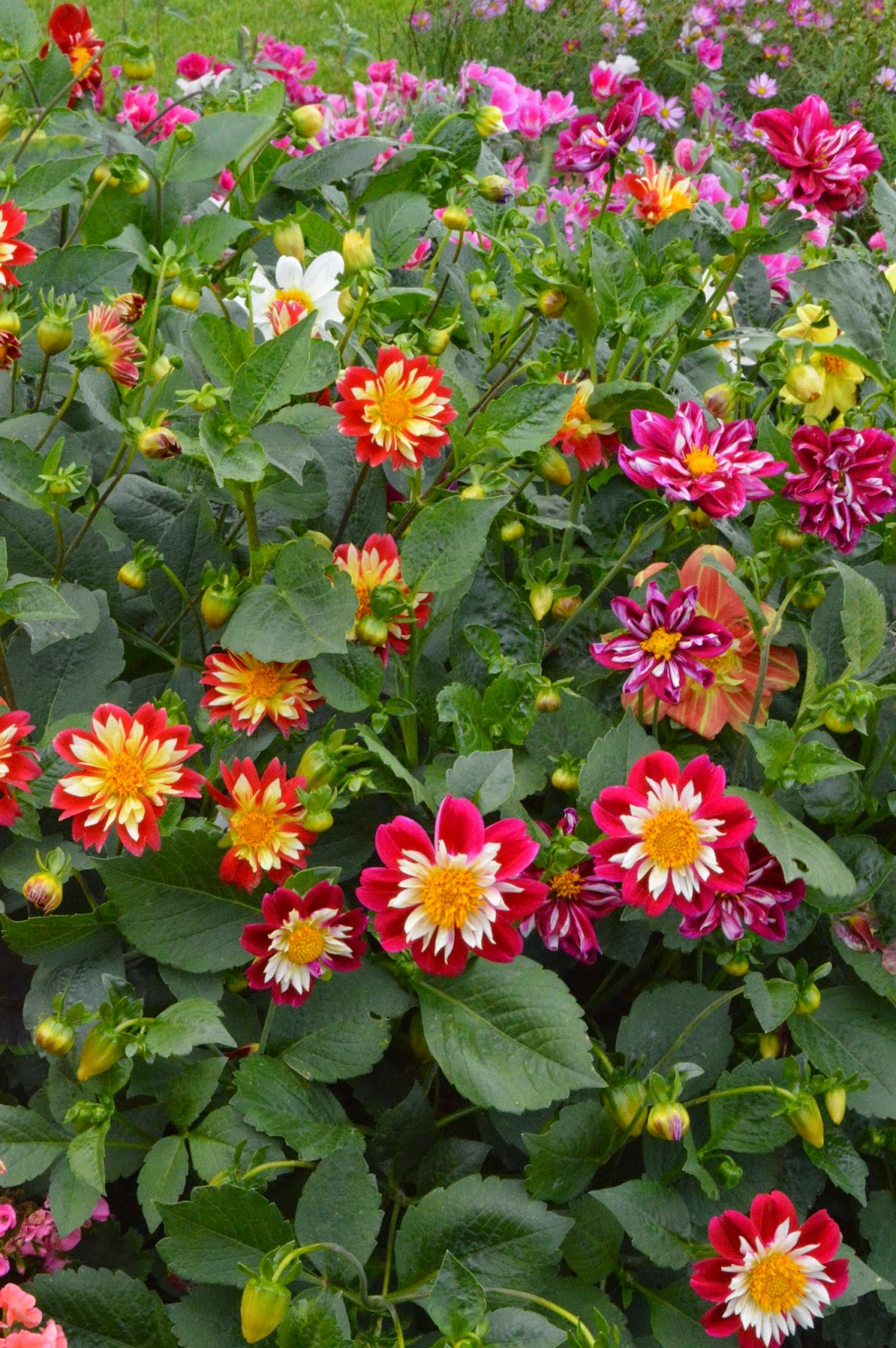 as did these very jazzy dahlias. 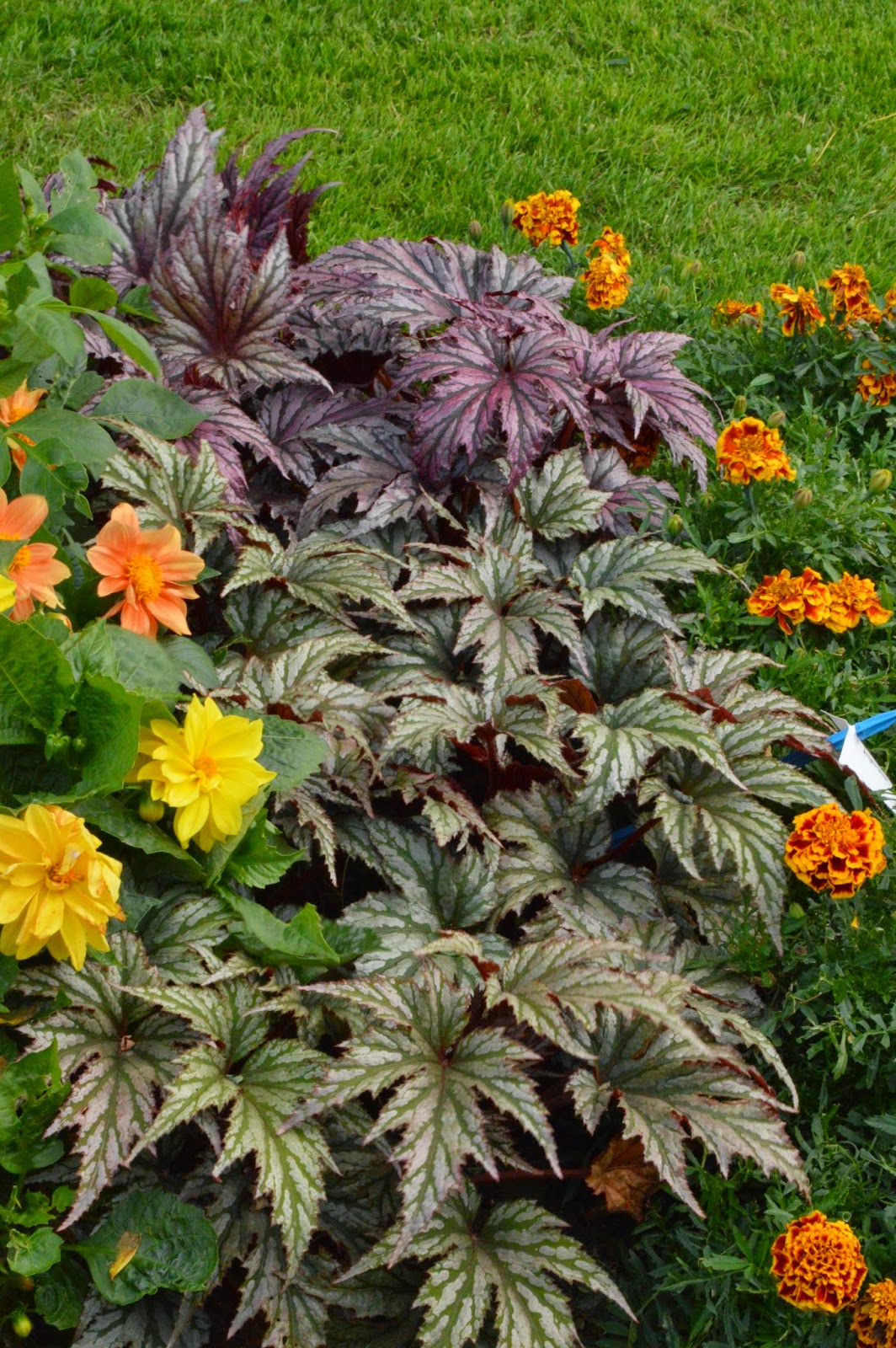 These begonias looked good in the border too, they set off the dahlias and tagetes either side of them very well.  Again I have to admit I am not really a bedding plant sort of gardener, but I looked at them and thought they would also look good in a pot.  I've been trialing Thompson and Morgan plants for a couple of years now and that has challenged me at times at how I would grow plants I would not usually consider, and this has led to some very interesting pots of plants.

We were plied with tea and cake and sent on our way with goody bags.  So you can expect further updates on how these seeds and plants perform.  But I will give you my top tip for the must grow plant from all that I saw ......... 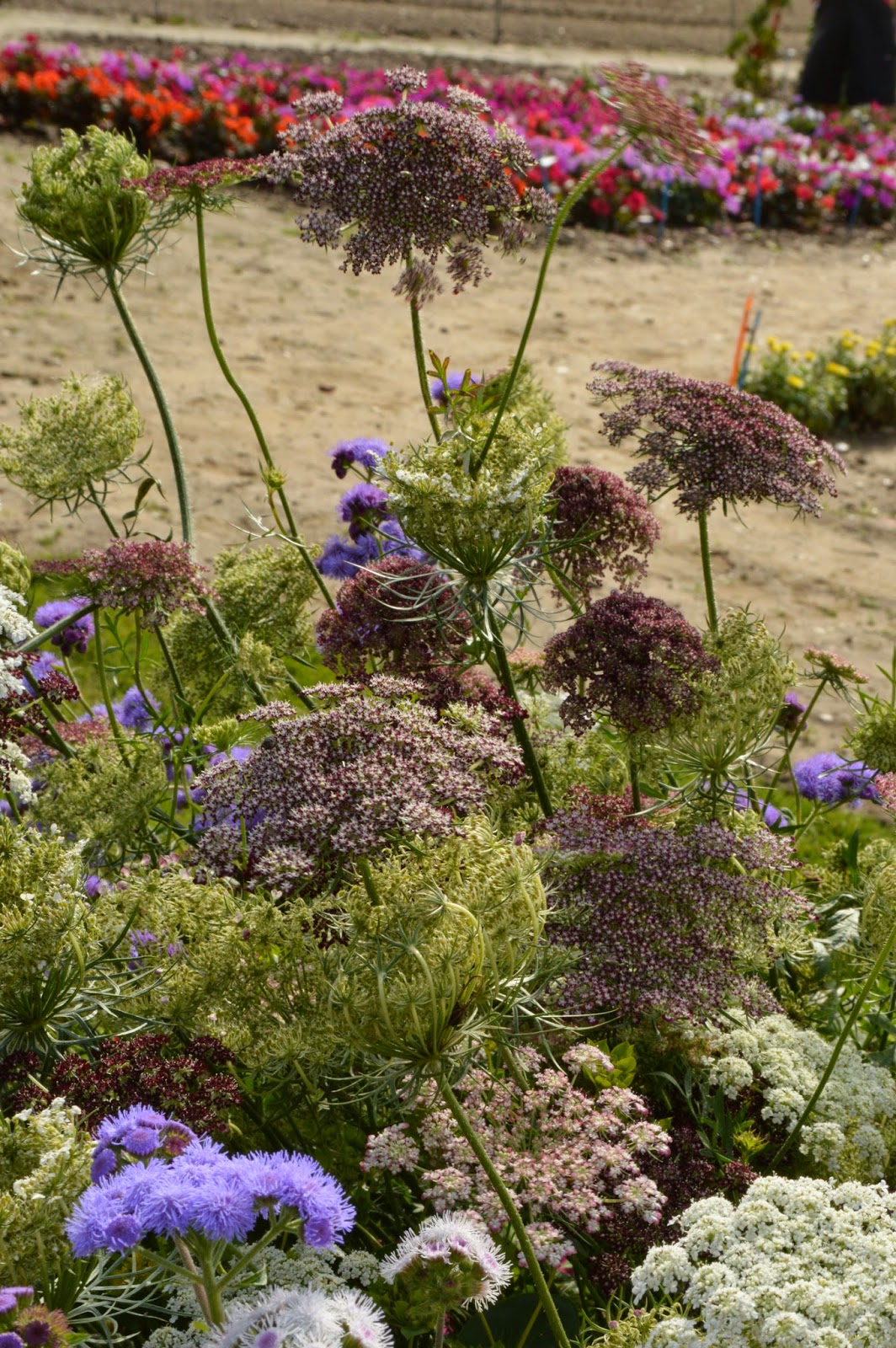 ...... Daucus Dara, the cut flower carrot, seriously find this and buy it, it will make you glad you did.  Of course I now have a packet of seeds to try so I will let you know how they do next year.

I have to finish with a big thank you to Thompson and Morgan, Michael and Kris for the invitation and for such a great opportunity, it was a privilege to be able to attend.
Begonias. dahlias Daucus Dara plant trials tagetes Thompson and Morgan