September 26, 2013
Its that time of year when I have to spend a couple of days in Cambridge for a series of work related meetings.  As last year I stayed at Murray Edwards College so I was able to say hello to the Little Free Library again. 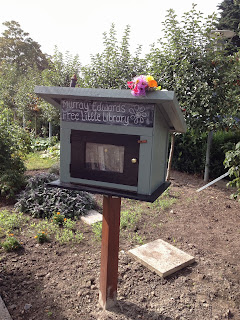 It was looking rather bonny with a little flower posy.  I decided this visit I really must wander around the gardens more than I had last year, it was a particularly nice sunny afternoon and I did not feel in a particular hurry. 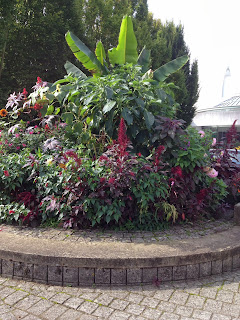 One of the first sights to greet you as you enter the front of the college is this rather wonderfully planted circular bed.  This is apparently the 'Magic Roundabout', and according to the Murray Edwards website this year the theme of the planting is Gram Parsons.  I confess to not really knowing who that was so I had to look him up. 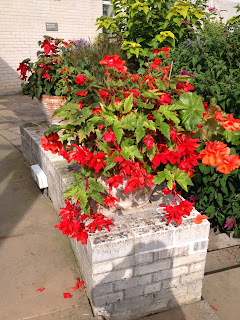 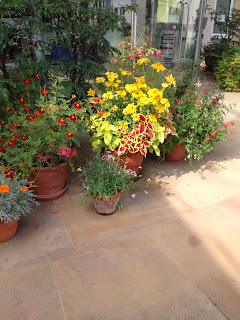 Closer to the door there are wonderful pot displays of fantastic colour that blazed away in the late September sun. 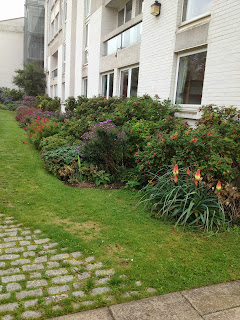 As I wandered around I found some great under-window planting by the halls of residence. 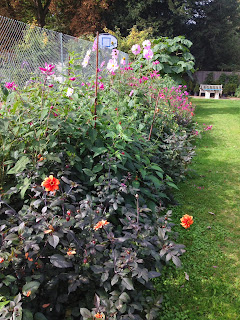 The tennis court had this great dahlia border along the side of it. 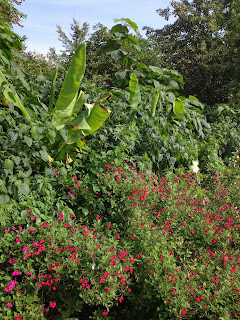 There is some great use of huge foliage plants in the borders, it was noticeable the amount of large-leaves that were present and I think used incredbily well. 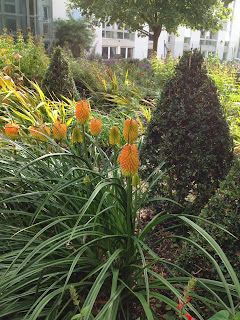 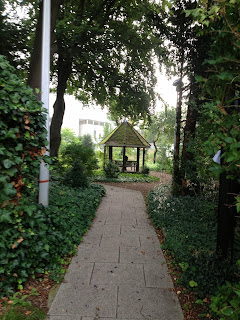 Back around to the other side of the college and there is this entrance path with the gazebo. 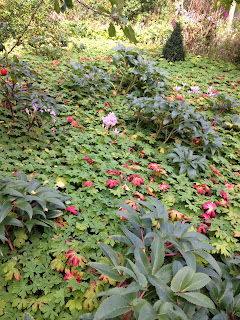 This is quite a woody, wild underplanted area and I loved the colchicums coming up. 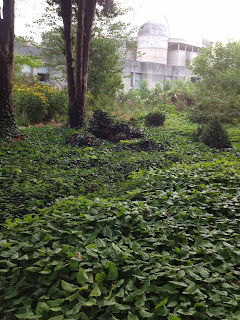 There is a lot of ground cover and ivy covered lumps.  I wondered what was under the lumpy ivy-bumps, I wondered if you feel asleep under one of the trees if you might not get covered over quickly by ivy and become one of the lumps for ever.  Maybe I have been too many scary stories recently...... 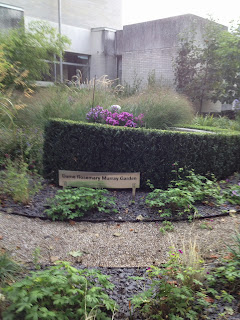 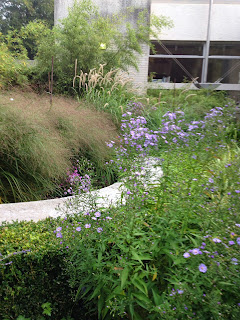 There is also the Dame Rosemary Murray garden, named after the first female VC  at Cambridge and a key person in the foundaton of New Hall, (which was later renamed as Murray Edwards College) and is a recreation of the College's 2007 Chelsea Flower Show entry which won a bronze medal.  It is a great small garden and good to see that it was re-used within the College grounds so that everyone could enjoy it.  It certainly seems fitting that it was named after Dame Rosemary Murray, who was known to do some weeding/planting herself.

I am looking forward to going back again next year and seeing how the gardens are developing.