Book Review: The Hidden Kingdom of Fungi by Keith Seifert

This new book from Keith Seifert says that it explores the microscopic world in our forests, home and bodies, yes, bodies.  I don't know if I am fascinated or nervous.  Keith has been studying fungi for more than forty years and was president of the International Mycological Association. 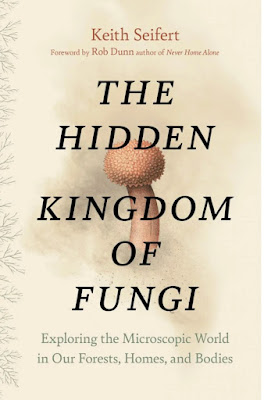 I have not paid for this book and I have not been paid to write this review.  My words and opinions are my own.  I know a few sketchy facts about fungi but really I know next to nothing so this book was of great interest to me.  The more I read this book, the more I realised how tiny my knowledge was.
Keith starts the book telling us how he became interested in mycology, right from when he was a small child gardening with his parents.  This book is a comprehensive overview of his knowledge, it is detailed and meticulous and also very accessible.  You can of course avoid the Fungal Classification section at the end of the book but if you are interested in the deep science of the book then it is there for you.  This is a book at you can read at your own level to gain a lot from.
The books takes us through sections on fungi in forests and in farming.  He talks about the relationships between fungi, how some are perceived as more useful than others.  How some fungi protect their hosts to the detriments of others.  It is fascinating.
There are sections on every aspect of fungi that you can (or did not) think of.  Keith talks to us about air-born fungi and about how understanding about how fungi works can help us improve sustainability in our farming methods.  You might not want to invite him into your home as he tells us the first thing he does when entering a house is to look for signs of fungus.  Apparently people get uneasy when he does this, what a surprise! He is looking at dust (please don't visit me) and particles in the sunlight and the moulds and bloches that appear in various places in the home: around sinks, in the fridge and the grouting in-between tiles to name but a few and these are just the ones that can be seen.  He also talks about the unseen fungi, the ones rotting the wooden frames of homes, the ones under the floor, the ones everywhere.
I learned was that yeast is a fungus.  Apparently up to 10 million yeast cells live on the average scalp and it is thought they help protect our skin from drying out and ward off infectious microbes.  Let us not even get into discussions about fungal infections: ringworm and the like.  Of course yeasts are also very useful, they are used extensively in baking and brewing.
Fungi have been researched for many years for their positive aspects.  Penicillin is derived from fungi as is Quorn, the vegetarian meat substitute.  Keith closes the book looking at the scientific developments that already benefit our lives from the study of mycology.  He talks of how enzymes derived from rotting wood are used to create chemicals that reduce the odour from paper mills and about the development of biofuels that rely on fungi to break down cellulose.  Even our stone-washed denim jeans usually involves the softening of the denim using fungi to break down the cellulases.
Of course widening the use of fungi can bring problems too.  Moving plants and animals across the globe brings all sorts of fungi and other issues with them that can lead to disease.  Possibly, we are told, that fungal infections might have been involved in the extinction of the dinosaurs.  Keith is not suggesting that they died from athletes foot, but that as the planet cooled dinosaurs could not increase their body temperature enough to fight off pathogenic moulds.
Keith is a man on a mission to encourage us to understand and recognise the fungi around us: to identify the benefits and realise the downsides.  This book is an intelligent and thoughtful insight into this world........ but I am still not inviting him to visit my home.....
The Hidden Kingdom of Fungi by Keith Seifert is published by Greystone Books