A visit to Nymans

Nymans is a garden I have wanted to visit for a long time.  It has been 'on the list' probably since I first heard of Leonard Messel and I cannot tell you how long ago that was. 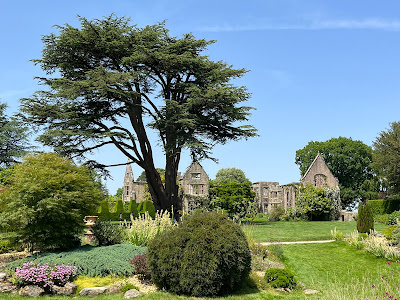 I had the opportunity to be visiting close by (more of that in a later post she says mysteriously) and I decided to stop at Nymans on the way home.  It was the hottest day of the year and as I got into the car to drive there the car told me it was 32 deg.  By the time I left it was 35 deg.  Us Brits are not good as such heat, well I am not anyway.  I had my trusty sunhat, a bottle of water and lots of factor 50 sun block, I had at least travelled prepared. 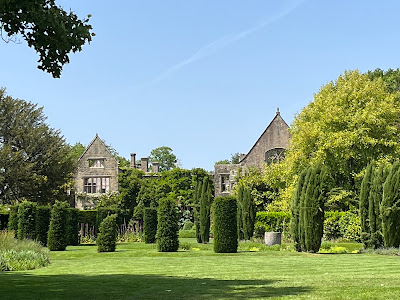 The house itself was originally built around 1839 by George Harrington and it was a very nice but fairly standard Regency style house.  The Messel family bought it in 1890 and it then went through several phases of change.  Leonard Messel inherited the house in 1915 and continued the changes to the house.  Sadly in 1947, which was around 19 years since the house was completed,  it was partially destroyed by fire. Over the years part of the house was made livable in and the family continued to use it.  In 1953 the house and gardens were taken over by the National Trust. 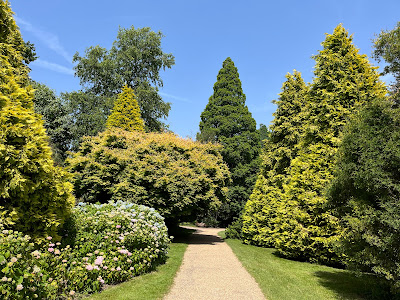 I had a choice of paths into the garden.  It was just a bit too hot to be wandering around too much and I did not want to get stuck in traffic on the way home (I shouldn't have worried, it was inevitable) so I thought I would walk the perimeter path as it seemed to take me around and through the garden.  This felt like a plan. 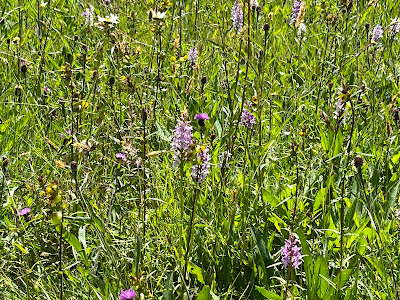 I quickly became entranced by the wildflower areas.  Just look at the range of plants, I was very envious. 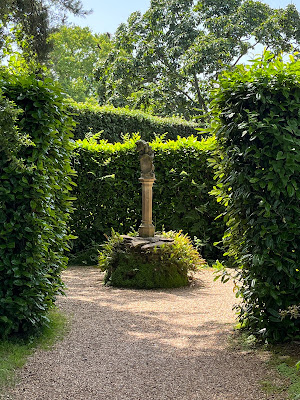 There are tantalising glimpses into the garden as you follow the path.   I resisted the urge to follow them.  I told myself this will be for another day and at every glimpse I was even more certain that there will be another day.  I have to return to this garden. 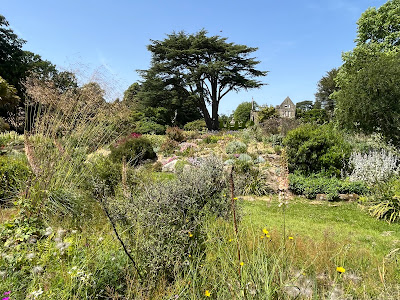 The planting in the garden is phenomenal.  All helped by the house ruins as a back drop, but... 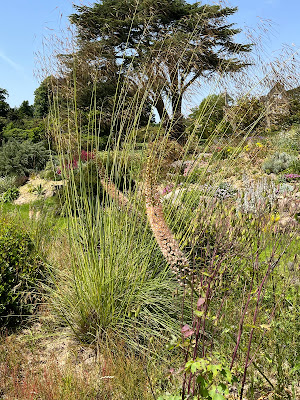 just look at this grass/apricot foxtail lily combination.  This could be replicated in a much smaller space, unless like me you are completely incapable of growing foxtail lilies.... oh so sad am I.... 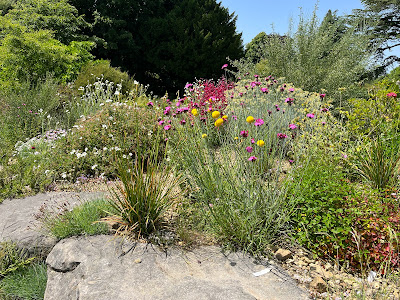 This is the South African bed, I loved this area of planting very much, it was so colourful but also sat well within its rocky territory.  Which of course, is the whole idea. 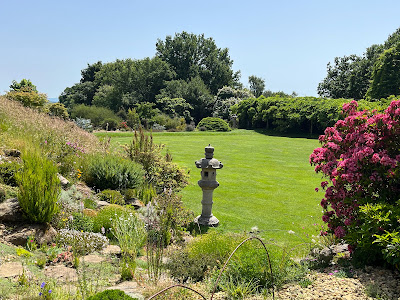 There are several garden areas as you walk through, this one, the Croquet Lawn which is a wonderful green cooling space. 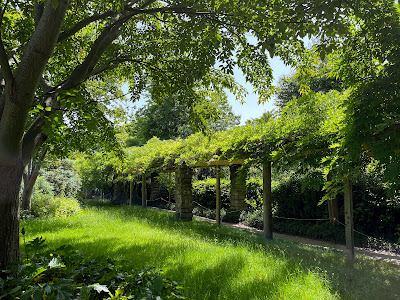 There are the 'arts and crafts' touches in the garden such as this wonderful wisteria pergola. 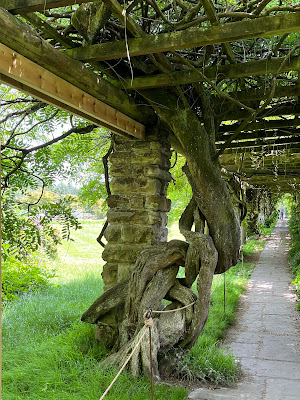 Just look at the size of the wisteria trunk!  I am not sure I have ever seen one this size before, it is incredible. 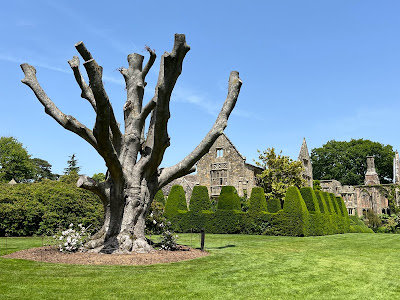 I stopped to look at this very pruned tree, I am not sure what type it is but it is clearly alive.  There are the signs of new growth right at the top. 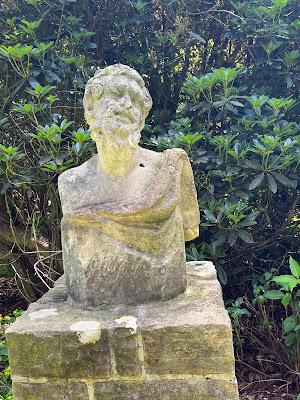 I paused to say hello to this chappie, he looks a bit in pain, but there he is missing arms and most of his lower body. 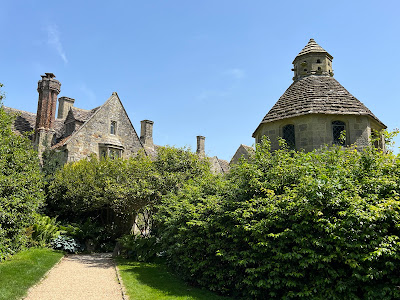 I paused also to say hello to the dovecote, rather a fine one.  Well, the whole house even as ruins is rather fine so of course it is. 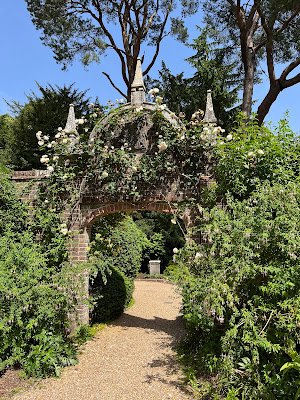 The Walled Garden is quite special.  It is an irregular shape, being not square or circular, but a bit of both. 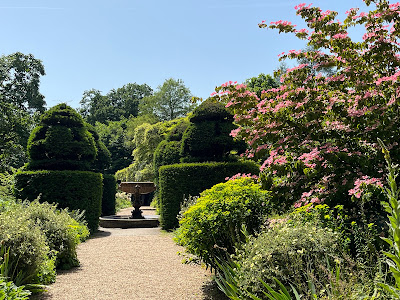 You are drawn along its pathways, this central water feature felt cooling, everything needed to feel cooling, I did not feel cool. 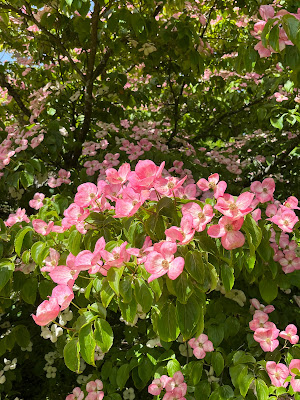 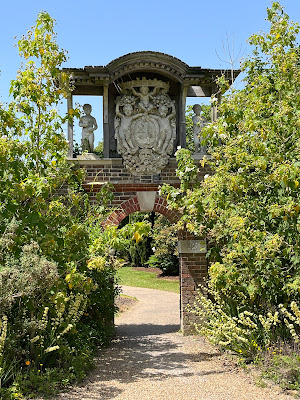 I loved this gateway out (or in) from the Walled Garden. 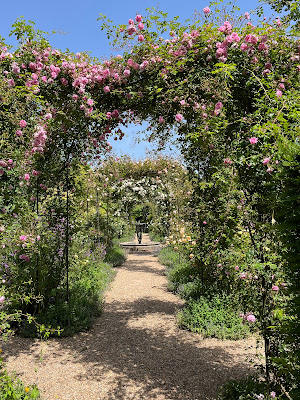 My nose led me into the rose garden, on this hot afternoon (have I mentioned it was hot?) the scent was filling the air so that the air almost hummed. 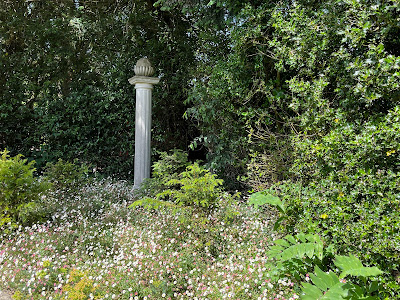 I smiled at the Erigeron karvinskianus, always a joy to see as it spreads itself around.  As often said, it is against the law to have any sort of Arts and Crafts garden without including this daisy. 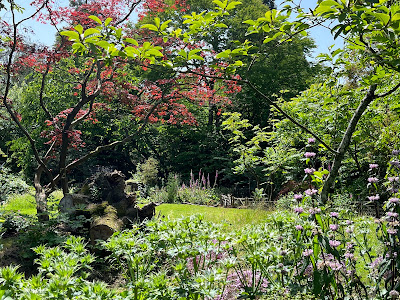 There is so much to see at this garden, I really do have to return. 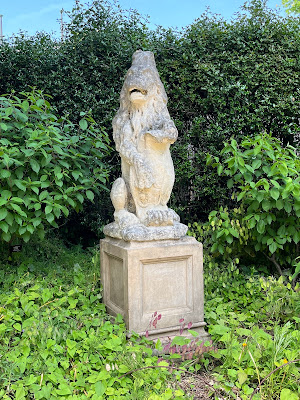 I did not go into the woods on my visit and that is a real must.  I feel that should be an autumn visit maybe; or maybe a spring visit as regular readers will know I have my adored Magnolia Leonard Messel, so making a spring trip to hopefully find one in the garden would be a nice thing to do.  (If they do not have one please don't tell me, I shall sniffle).  Anyhoo, maybe this is two more trips, what a wonderful thought.