B.S Huntbach is also known as The Sussex Surrealist.  This fascinating book is an insight into his life and work and is written by his daughter, Christiane. 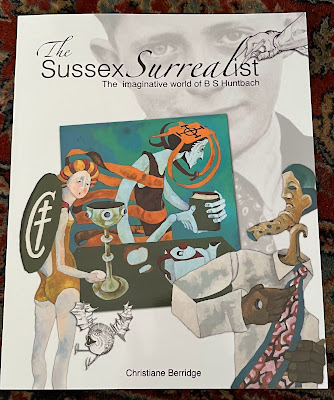 Full disclosure: I asked if I could review this book, I know Christiane and I was intrigued when I saw the work that her father did.  I have not paid for this book nor have I been paid to write this review.  My words and opinions are as ever my own.  You all know me by now, it is my blog my rules and if I did not want to review this book then I would not do (I am not that nice!).
Barrie Sydney Huntbach was born in Nottingham in 1935 and fairly soon after the family moved to the Sussex coast where he spent the rest of his life.  Christiane talks us through his early years and about his marriage to her mother and birth of his children.  The main part of the book though is about his art and about his quest to have his artwork displayed and enjoyed. 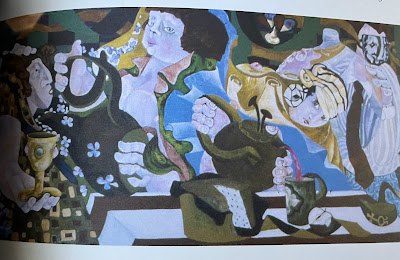 Barrie's work is in the surrealist style and Christiane talks us through the two and half decades when he was most active with his art which was all completed alongside his day job.  Not only did he paint he also left many many drawings.  When talking with Christiane she did say that she that she thinks his real genius is apparent in his drawings.

During his life time there were exhibitions of his work and there is a mural of his in situ in the entrance to  Portslade Town Hall.  There is also a mural in the Brighton Emmaus second hand superstore.
To give you an idea of the scale of Huntbach's range of work:  Christiane has a drawing of his that is 60 feet long and 40in wide called The Temptation of St Anthony; can you imagine the size of this drawing!  Many of Barrie's works were religious themed.  This epic took seven weeks to complete and was displayed at the Education Centre in Hove.  Christiane has this drawing amongst the many examples of his work still owned by the family; but it is so long it is difficult to photograph. 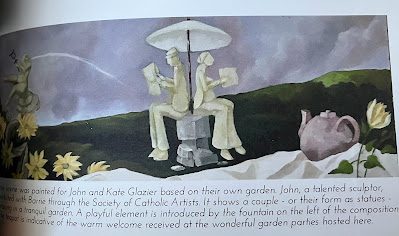 This is probably my favourite painting in the book.  Ok it involves flowers and a teapot, two of my very favourite things, but it also is just so peaceful.  It has a sense of calm that I really like.
The book is available to buy here https://www.blurb.co.uk/b/11093838-the-sussex-surrealist  If you are interested in surrealist art/art in general this is a captivating insight into this lesser known artist who maybe does deserve a wider audience.

Take care and be kind