April has started rather frosty, which is quite a concern bearing in mind that the Quince Brothers like to blossom early. 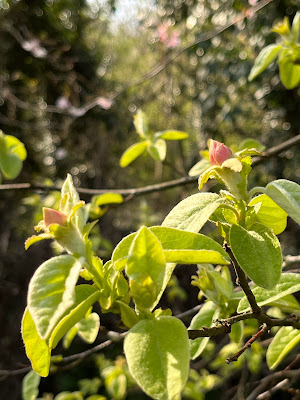 The blossom is at the 'on the cusp' moment, just waiting for a bit more warmth and a bit more sun.  There are plenty of bees buzzing around the garden so if they can just survive the frost then maybe, just maybe, there will be quinces.
Quince Major, who is Quince Vranja, blossoms a little earlier than Quince Minor, who is Quince Champion. 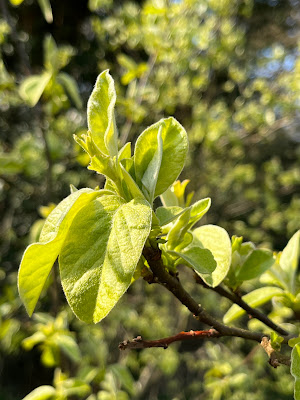 So I wonder if Quince Major does get frost damaged, that maybe Quince Minor being a week or so behind might be its saving grace?  In previous years when there has been late frost Quince Major has had a bit of a second flush of blossom that may (or may not, I have not exactly plotted each blossom as it appears) have led to fruit.
So I am a little anxious but still full of hope and rather excited. 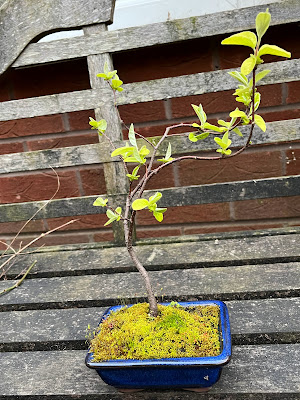 and this new kid on the block is Quince Mini Me.  I have mentioned previously I have been having a bit of thing about bonsai over recent years.  A re-awakening of a hobby I had when I was a teenager.  I did buy one bonsai tree some years ago now and it set me off wandering around the garden looking for tree seedlings I can train.  This is not a quince tree seedling, but it has 'suckers' that appear from its roots and I successfully removed one, treated it as a cutting and it rooted well.  Here, a year or so later, is the result.  This very sweet quince bonsai tree that is also leafing up well.  I am very pleased with its progress.  I am not holding my breath waiting for Mini Me to bear fruit, just having it survive is happiness enough for this little one.
Keep your fingers crossed for no more late frosts.
More followed trees can be found here stewarded by Squirrelbasket.
Take care and be kind
For more from the Blackberry Garden follow me on Twitter Facebook and Instagram
bonsai bonsai quince tree quest for a quince Quince Major Quince Minor quincelets tree following