Of course some plants are very reliable, you know that they will be there, doing their thing, year after year and this reliability is celebrated.  We need this level of stability and predictability in our gardening world.  They reflect the rhythm by which the rest of the plants are hopefully dancing to.   Even when that predictability makes me sigh a little, such as the emergence of the annual and perennial weeds that tell me there is a lot of weeding to do.  The first flowers on the dandelions are sign that the growing season is well and truly upon us.  I admire their resilience and cheek, their beauty and their attractiveness to pollinators. 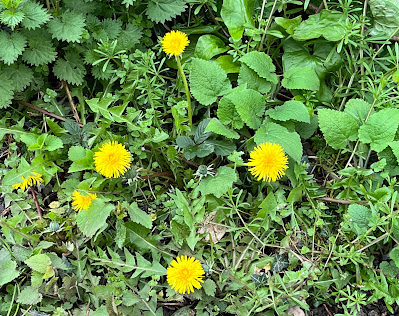 Dandelions (Taraxacum officinale) must be the best players of hide and seek in the garden, they can hide in plain sight until the moment they start to flower.  It is a skill, a real skill.  Even when they flower I can sometimes carefully weed around them before I realise that I was meant to be removing them.  I remove them from the flower borders but they run rampant in the Wild Garden and even in the formal lawns for all I care.  I mow them in the formal lawns but generally ignore them.  For what is a weed but a plant in the wrong place.  Of course this means that dandelions pop up in the flower borders, I understand this; I even grumble about it sometimes, but I generally just put up with it.  They smile, they are cheerful and did I mention that bees love them?
They are also edible, well, pretty much edible all apart from the stems apparently.  Beware though if you do decide to have a munch as they are known as 'wet the bed' for a reason, they are used as a diuretic.
You can use their leaves in salads, you can grind their roots to make coffee, they are a very useful little plant. I have done none of these things.  I don't eat salad (yuk) and I have tried dandelion coffee and I think it is what is known as an acquired taste..... 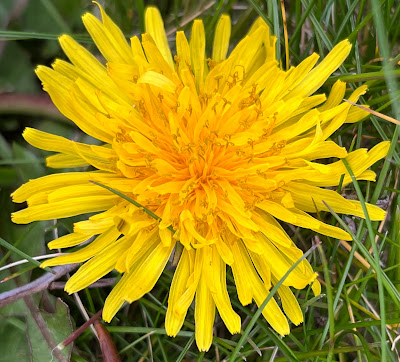 When I was a child the fizzy drink of dandelion and burdock was popular.  It was not as good as cherryade in my opinion, but I would drink it if there was little else on offer.  I have only once knowingly seen a burdock plant, it was growing at my brother's house and it was huge and big leaved and whilst I believe it to be quite a problem as a weed, it was a magnificent plant.  It took a twitter ID request to get it named.
Apparently the dandelion gets its common name from the French 'dents de lion' or lion's teeth, which relates to the shape of the foliage.  The seed head, which is a wonderful sphere of seeds attached to their own parachute that will fly in the breeze to find where it will set roots and grow, is also known as a dandelion clock.  Apparently (allegedly) if you blow the seeds the number of seeds left attached are the number of years you have left to live (cheerful!)  They are one of the most perfect creations when the clock is still pristine just before a breeze breaks it up releasing the seeds like tiny spinning parasols across the garden.  It was a favourite thing as a child to blow the seeds to make a wish and to watch them fly away.  This was usually to the tune of my parents admonishing me (gently) saying that each seed would germinate as  I spread them around the garden.  I am pretty sure they were right. 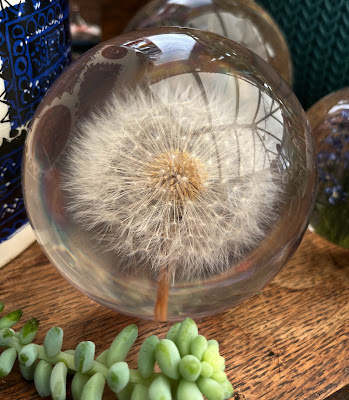 So I smile at the dandelions, like most plants they are more than just what they appear superficially.  As I think about them I start singing the song of the lion from the Wizard of Oz, who was just a dandy lion.  I see the bees enjoying them and I pull the heads of them to try and reduce the seeds (I pull the heads off the dandelions, not the bees).  I feel in someways I should dislike them more than I do, but they have their place in the garden and there are worse weeds that I have to battle.

Take care and be kind