It is starting to get a bit exciting now with the Quince Brothers.  They are breaking out of their winter dormacy and heading towards leafage. 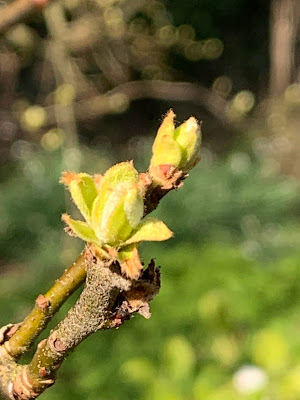 The slightly downy first covers of the buds have begun to peel back.  It is like someone has lit the green touch-paper and it is time to move.  The buds are such an acid-green, so pale a green that they are almost yellow.  Sometimes I worry a bit that they look quite yellow when first in leaf, but year after year they are this colour and it never seems to be an issue (unless of course this is why I do not get many quinces......)
This is when the chase begins in the quest for a quince.  It is also when all bets are now off as when the buds are popping open they are exposing their vulnerability.  Until now they have been fairly safe from the frost but as each scale peels back, like Gypsy Rose Lee a little more is exposed and should a frost descend then it could prove fatal for the nascent quincelets.  The pre-harvest moment could be over before it has began.  The milder the winter is the more I worry for late frosts, as if suddenly the winter wants to make up for not being cold enough and so plunges into cold to try and make up for it.  It is like the weather has an average temperature per season to achieve, so it is has been too mild for too long it has to suddenly plunge into deep cold to hit the average target.   Snow in March is not unheard of and late frosts into April are very much a thing.  I worry dear pre-quincelets, I worry.
Worrying about quincelets or lack of them is a trivial luxury.   I also worry about the current war in Ukraine and the humanitarian crisis that wars create.  If you want to donate to the Disasters Emergency Committee who provide support for the victims of war then please do so here.
More followed trees can be found here c/o Squirrelbasket
Take care and be kind.
For more from the Blackberry Garden follow me on Twitter Facebook and Instagram
quest for a quince Quince Major Quince Minor tree following