Book Review: A Guide to Medieval Gardens by Michael Brown

I find the history of gardens fascinating.  By their nature gardens are a fleeting thing, we develop and change them, ownership changes and fashions come and go.  Whilst I will be one of the first people to say that a garden should change over time, I also love finding out more about about how gardens have changed over the centuries.  So when  I was asked if I wanted to review this new book from Michael Brown I was not going to say no. 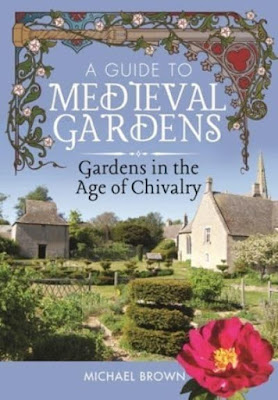 I have not paid for this book and I have not been paid to write this review.  My words and opinions are my own.
This is not the first book by Michael that I have read/reviewed: I reviewed his previous book 'Death in the Garden' a couple of years ago.  I enjoyed that book and found it well researched and well written so I had high hopes that this new book would be of the same quality.  I was not disappointed.  This is a book takes us on a researched, detailed guide of medieval gardens.  We learn about the evidence we have about them, because as said above an original unchanged garden is a rare thing.  We learn about their influences from the sacred to the secular.  Food growing was very important but there were also features for the users such as tree seats.  Michael tells us that finding paintings and illustrations of gardens is not easy as generally they were not valued as people and buildings are and so not the subject of art.  A good example that Michael uses is that one of the pieces of evidence of a tree seat was the depiction of the matyrdom of St Sebastian where he is standing on a tree seat, whilst tied to a tree.....
Micheal tells us of the different types of garden and the different features and uses within them.  If you expand the notion of a garden to include managed green spaces such as orchards and hunting parks you get an idea of the different reasons land owners created different areas in their land.
One of the greatest fascinations I have when thinking about gardens through history is around what would they be growing?  By medieval times there was already intercontinental travel.  French culture was dominant in our landed gentry from the time of William the Conqueror, and just as we like to grow plants that remind us of home and our travels, plants were soon moving into the country for culinary and decorative use.  The Romans brought their plants with them and so the trend continues.  There would have been roses, there were irises and foxgloves.  The vegetables may have looked a bit different to what we generally grow now: Michael tells us that cabbages were probably more like kale and did not have such a 'ball' shape to them.
We are even told about the tools that were used and how they were used.  Michael has used many of these tools and practices in creating the medieval garden at Prebendal Manor in Northamptonshire.  A garden I would love to visit one day and is not really that far away.
I really enjoyed reading this book, I learned a lot.  Michael is superb at adding in fascinating bits of detail and this book is very hard to put down once you start reading it.
A Guide to Medieval Gardens by Michael Brown is published by Pen and Sword Books.