The tracks of my (cyclamen) tears

Cyclamen coum might just be one of my very favourite winter flowering plants.  This is alongside my other very favourites, but trust me, there are few flowers that make me smile as much when I see these little sweethearts start to emerge. 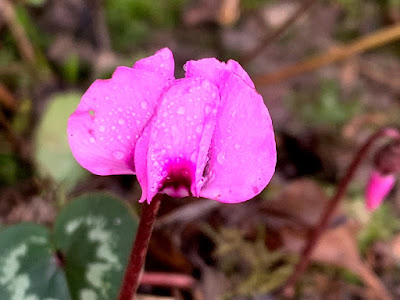 In the other seasons of the year, when there are lots of flowers and lots of colours, I probably would not consider fixating on such a small flower.  I would probably overlook it, which is why I think these are very clever little plants.  They pick their moment and then I can be found kneeling and stooping to look and admire them...... and I do this a lot. 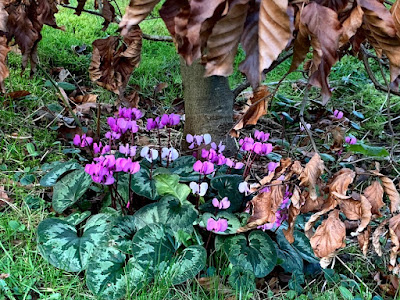 It is probably a good ten years since I planted a pot of cyclamen under one of the beech pillars.  It has developed into a nice little clump, nay, let me declare it a goodly clump, and it makes me happy.  By planting it under the tree it keeps them safe from me trying to plant more things on top of them in the summer when they have dipped down underground to sleep for the season.  What I wanted though, what I desired, was for them to spread further around the garden. 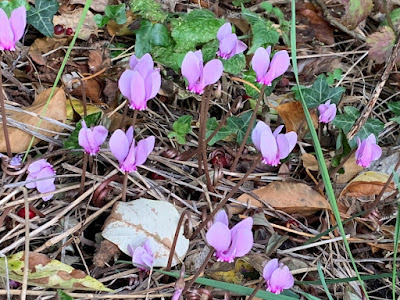 You can see the curly-whirly seed heads amongst these flowers.  The seeds are relatively heavy and so just drop to the ground - but the real magic is that when they start to wander around the garden they are being spread by ants.  They have a sweetness to their coating that ants like and they will tootle off with them around the around.  I have cyclamen in a few areas of the garden and I can see random ones starting to pop up here and there as a result of tootling ants.  This is very exciting. 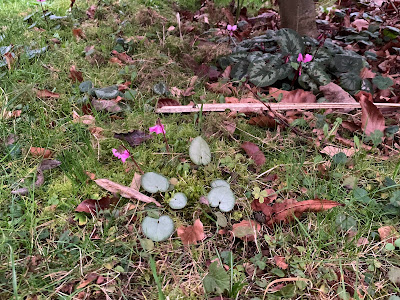 It was not however quite so obvious from this clump of cyclamen until this year. 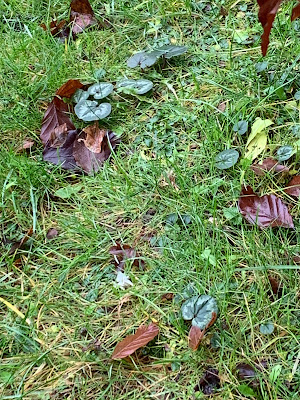 Now I can track the path the ants take up the garden with a sprinkling of cyclamen leaves.  The first year or so you just get a leaf, sometimes a tiny leaf so it is very easy to miss. Then the plants get big enough to flower after a year or so and this is just a moment of sheer joy.
So why, you ask me, is the title about tears?  Are you crying with happiness?  I'm not really crying at all, but if it was it would be in happiness.  For some reason the more I thought about the tracks of the ants across the garden the more the song kept running around my head.  That or the Colonel Hathi Elephant March from Disney's Jungle Book (1967 version).
Which now I think about it is a far better way of thinking about ants tromping around the garden.  So that's my ear-worm for the day sorted, if you want me I will be stomping around the garden in time to the elephants  ants
Stay safe and be kind.
For more from the Blackberry Garden follow me on Twitter Facebook and Instagram
cyclamen cyclamen coum winter flowers winter garden